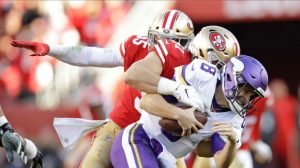 There is no divisive player in Minnesota Vikings history than one Kirk Cousins. Even before Cousins put ink to paper and changed how the NFL paid players (and by players I mean quarterbacks), Cousins divided Vikings fans more than an an ill-timed fall near the US Bank light rail.

While Cousins has more supporters now than he did in 2018, thanks to his stellar 2020. That’s an objective fact, despite the (admitted) never ending moving goalposts of his online detractors, Cousins has elevated the Vikings offense to one of the best in the league thanks to his incredibly efficient play.

What do I mean by that?

The best way to explain it would be to point to the fact that despite being 29th in the league in pass attempts, the Vikings offense is a top 10 unit in terms of passing touchdowns.

That’s by design, as the Vikings are a run first team courtesy of Dalvin Cook and offensive coordinator Gary Kubiak (who is clearly much more conservative this season than he’s been historically (which means that Zimmer is influencing the offensive gameplay)). When executed the right way, this allows the Vikings offense to put together long, methodical drives that are defensive in nature as they keep opposing offenses sidelined for huge chunks of time.

A good example of that was the Seahawks game, one in which the Vikings had over five drives of ten plays (or more). The key there is and was to score touchdowns on those drives. That sounds insanely obvious, as that’s the goal of every offensive drive, but if you end up settling for field goals instead of touchdowns you can end up dominating the time of possession and little else.

That was the case recently against Tampa Bay, which was made even worse when those field goals sailed wide left or right.

What does this have to do with the headline of this piece?

Well, the idea that this elite offense would move on from Cousins is essentially laughable at this point. No one knows how hard it is to find decent quarterback help than Vikings general manager Rick Spielman.

This Vikings team, or offense, is a good left guard away from really taking the league by storm. The defense will have some of its core back in 2021, and will also have a real nose tackle and another draft of good players to add to either the depth or the holes we’ve seen this season.

There’s a lot to be positive about, so the idea of trading Cousins to anyone, let alone a NFC contender like the 49ers, makes no sense. Even with a first-round pick (or two), the 49ers won’t have a pick that’d guarantee the Vikings a top 3 quarterback in the 2021 Draft.

And even then there’s no guarantee that those QBs will develop into anything near what Cousins is or does. Why hurt this offense when you don’t need to?

Where is this coming from? NFL.com writer Gregg Rosenthal said the following yesterday about the idea of Cousins reuniting with Kyle Shanahan in the Bay area. 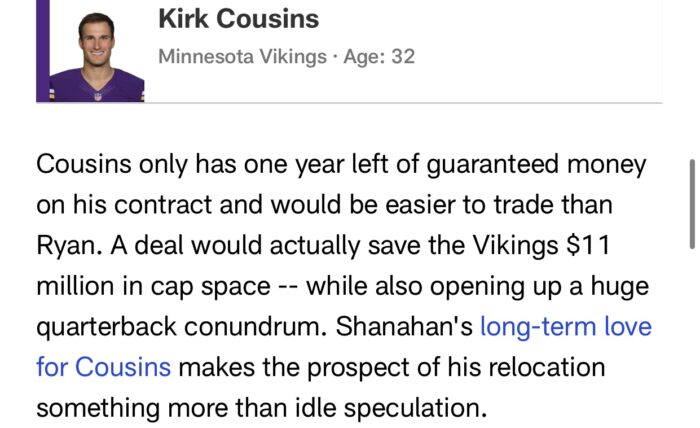 In Rosenthal’s defense, he does mention that this would create a QB conundrum in Minny (while saving $11 million in cap space?). The financial benefits are so far outweighed by the aforementioned conundrum that this should be a complete non-starter, which I think ironically is Rosenthal’s conclusion.

Then again, the 49ers could pull a Buffalo and offer the Vikings something they couldn’t refuse. Jay Cutler was younger than Cousins, but he garnered two first rounders over a decade ago. The 49ers may try, but even with two first rounders I’d say that this move would handicap a Vikings team that knows more than any other franchise how hard finding QB help can be.

Let’s just hope San Francisco doesn’t offer the Vikings every 7th-round pick. Then we might really be in trouble.