Where do we as Vikings fans rank as the ‘Most Passionate’ in the league?

Let’s say that you’ve just moved to the United States from abroad and are brand new to the NFL. You’ve seen a couple of highlight videos on YouTube and have decided that you want to support an NFL franchise. You may be surprised when searching for teams with the best winning percentages, and most fervent fan bases, that the Vikings routinely show up in the top ten (or sometimes five) depending on what metric you’re using. Especially for the former.

That’s what we’ve been told, as Vikings fans, growing up as well. That the Vikings have this broad national following thanks to seeds that were planted in the 1970s during the Purple People Eater days, and that were watered with/by the fact that the Vikings have had some of the greatest players in NFL history rocking the purple and gold. While Minnesota is often thought of as flyover country, it that middle of the country location that also gives the Vikings access to essentially everything from the Canadian border on down until you start running into Broncos fans to the South, Seahawks fans to the East and Chiefs fans to the Southeast (which may explain why some of the top bets per team by new customers at betfair are on the Vikings, as well).

After some good teams in the ’80’s the Vikings starting building a fan base for the Millennial generation in the mid-to-late 90’s thanks to players like Cris Carter, the drafting of Randy Moss and eventually the drafting of quarterback Daunte Culpepper. I can attest to that, as the majority of our writers are young and actually not from or living in Minnesota. Whenever I’ve asked why they’re Vikings fans the answer is some combination of Randy Moss/Cris Carter/Culpepper/Adrian Peterson. Etc.

Sure Minnesota is not exactly Las Vegas which boasts of a lot more than just casinos and fun things, but it’s still got a sport legacy to reckon with. The question is, though, whether or not that legacy (from a fan perspective) is still one that as popular as it was 10 years ago. There are a couple of ways to answer that question, so I thought that I would go the new school route and focus on social media interaction. In doing so I came across the following on the website WSN.com.

WSN compiled all sorts of social media stats for the 32-teams in the NFL, as their article states:

“We’ve accumulated and totaled the Facebook page likes, Twitter followers and Instagram followers of all thirty-two NFL teams and ranked them from most popular to least popular.”

So, where do the Vikings rank? 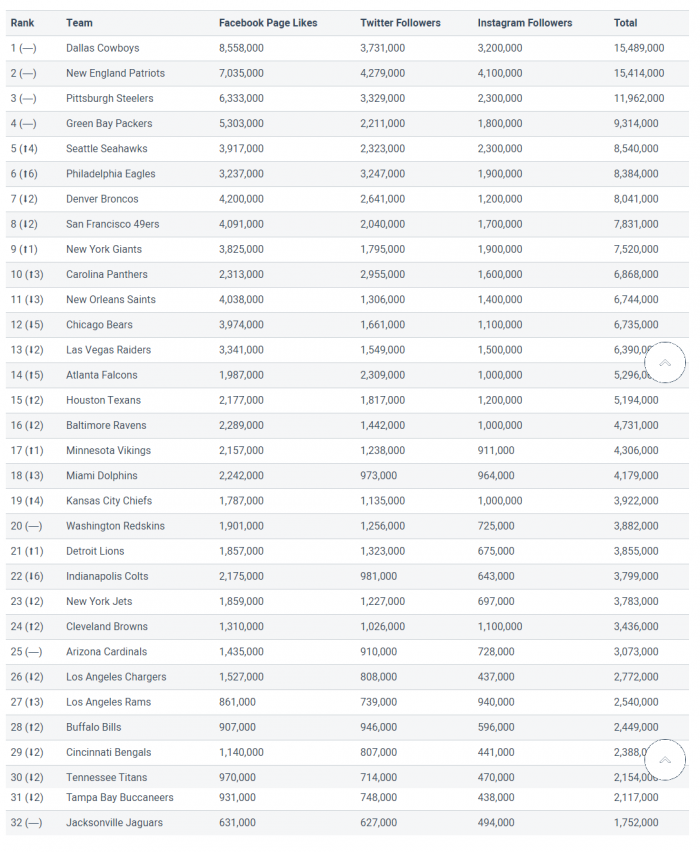 What did they say about the Vikings in their article?

They also had a breakdown of recent Vikings history, but it didn’ say much about anything other than what you’d get if you copied and pasted the 2018, 2019 and 2020 history of those respective seasons from Wikipedia.

Although it’s hard to argue against as this is perhaps the best way to do that as you’d think that simply discussing a team on Twitter, for example, could make teams that have made the playoffs in recent years seem more popular than they really are as casual fans watch the Wild Card round of the playoffs and discuss the game. That doesn’t necessarily mean that that person is a fan of that team, but rather that that person is aware of the team and engaging in a discussion about them.

Following a team on social media isn’t the sole way to go about this, though, as there are tons of fans who are just as passionate as those of us who do talk shop on Twitter/Facebook/UFFda!, but that either can’t operate a smartphone or just stopped after the 50th “debate” in which they were told to go kill themself by someone over the debate as to who was the better Vikings running back, Onterrio Smith or Michael Bennett.

Forbes tried to find the most “passionate” fans from all four major sports. Unfortunately they only listed the top ten (as far as I could find), with an NFL team filling six-of-ten spots. Those teams are as follows (Spoiler Alert: It’s almost as if they picked the six teams the Vikings hate the most).

While Forbes does list some numbers, they’re mostly about things like who the owner the team owner is or the value of the franchise, which isn’t necessarily important when you’re looking at who is the best fan base.

They do say the following in their intro; however:

“We look at more concrete evidence, including television ratings, game attendance, merchandise sales and social media reach. We evaluated every one of North America’s 123 professional teams in the NBA, the NFL, the NHL, and MLB.

One takeaway: NFL fans are the most devoted, with fans of the league’s 32 teams grabbing six of the top ten spots. The most blasé? Hockey and baseball fans, each with only one franchise represented.”

So what should we take away from this?

Well first, we really need to step our game(s) up. We are getting our asses handed to us by the Packers in nearly every list like this across the internet and if there’s anything that I know will motivate Vikings fans, it’s kicking Packer ass.

The next question then becomes, how?

I have an idea as to how but it is not ready to be launched just yet (just keep an eye out for an announcement here that discusses something called UFFda!). In the meantime? Really all we can do is mock the Packers for spending so much time talking about their ONE team online. We have to split our focus onto things like the NHL, the Twins, the Timberwolves, indoor plumbing, not marrying our first cousins, etc.

So, let them have the world’s largest ball of twine while we sit back with everything else… At least until we win a Super Bowl. Then we’ll be able to come back like COVID in June and take over lists like these, too!