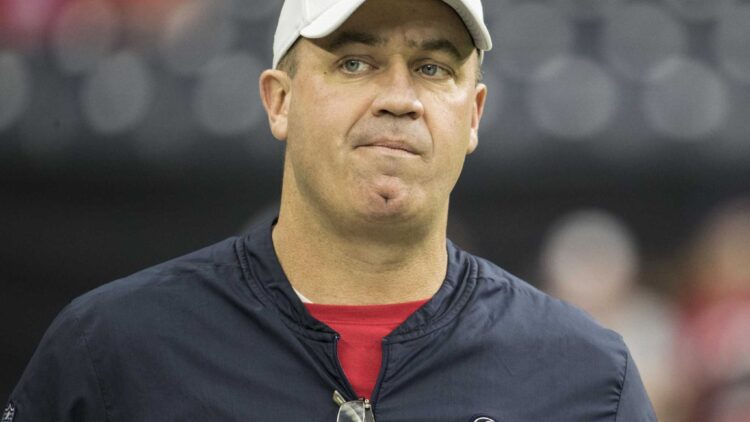 Houston Texans head coach Bill O'Brien walks on the field before an NFL football game against the Tennessee Titans at NRG Stadium on Sunday, Dec. 29, 2019, in Houston.

After a crazy week in which no one was was entirely sure that the Minnesota Vikings would end up even fielding a team this weekend, the game followed suit as it appeared the Houston Texans were going to force overtime (or go for two to win) late Sunday. However, the final touchdown pass from Texans quarterback Deshaun Watson was overturned and the Vikings ran out the clock to notch their first win of the season against the now 0-4 Texans at “home” in Houston.

The Vikings scored first, and lead 17-6 at half-time, but as we saw last weekend things tightened up in the second-half. The main difference between this, last, and every week this year is that the Vikings were consistent in all four quarters and put up at least a touchdown in all four quarters (scoring a touchdown in the first, second and fourth quarters and a touchdown and field goal in the third quarter). Dalvin Cook scored first from six yards out after an impressive drive that had to make Vikings management/coaching and fans feel that if only the Vikings could field a decent offensive line (which they appeared to today), they could really have something special cooking on offense (now and in the future).

The Vikes finished the day with over 400 yards of total offense, as well. If you recall, last season Vikings quarterback Kirk Cousins had a rough September and ended up winning the NFC Offensive Player of the Month in October, and while he didn’t have a spectacular day (16/22 for 260 yards and a touchdown), he showed that he didn’t need to be for this offense to be dangerous and hard to stop, which could and should be the formula moving forward. Again, imagine this offense and Cousins behind a (consistently) good offensive line.

Like last weekend, Dalvin Cook was a force, with 27 carries for 130 yards (4.8 yards per) and two touchdowns on the day. Justin Jefferson continued to finally shake the Rick Spielman first (or second… or anyone before the fifth) round drafted wide receiver curse by showing that he was the right pick to replace Stefon Diggs, with another 100 yard day AND another day in which he averaged over 25 yards per catch. Adam Thielen had a monster day, as well, with eight grabs for 114 yards (14.2 yards per catch) and a touchdown. But this offense ran through Cook all day, which upped their snap count and helped them avoid turnovers, which after being the team with the second most of any team in the NFL after three weeks, was a welcome improvement.

On the defensive side of the ball, Yannick Ngakoue notched his third sack of the season, and the defense held up against Watson and company by allowing their lowest point total of the season. While they have a huge test next week against MVP-front runner Russell Wilson and company, it has to feel nice for this young defense to notch a win after a week in which they felt like they made strides against the Titans but still ended up losing after bending and breaking all day.

Texans fans will (and already are, I’m sure) place blame squarely on the play-calling of Bill O’Brien and the Texans head coaches, though. The Texans offense looked inept until they needed a comeback, which they almost had. The Vikings’ young defense proved tough, though, stopping three straight runs at the goal-line (the last of which saw new Texan/Houston Paraiah David Johnson recover a fumble of his own). The final play of the drive was a high pass to Will Fuller (who had a good day with over 100 yards and a touchdown) that he tipped to himself and appeared to catch until further review showed that the ball clearly hit the turf first.

The Vikings ran out the clock and notched their first win of the season.

More importantly though, they’ve now seen two weeks in a row something worth building around on both sides of the ball, even with the lack of depth and experience they’ve had on defense (especially at the corner position). While it may be too late for 2020, imagine this team with a real nose tackle, Ngakoue and Danielle Hunter, again a GOOD OFFENSIVE LINE and some experience at the corner spot?

I’m joking, but it’s nice that the Vikings generated positive news this week. We all needed it.