Vikings vs. Packers: The History 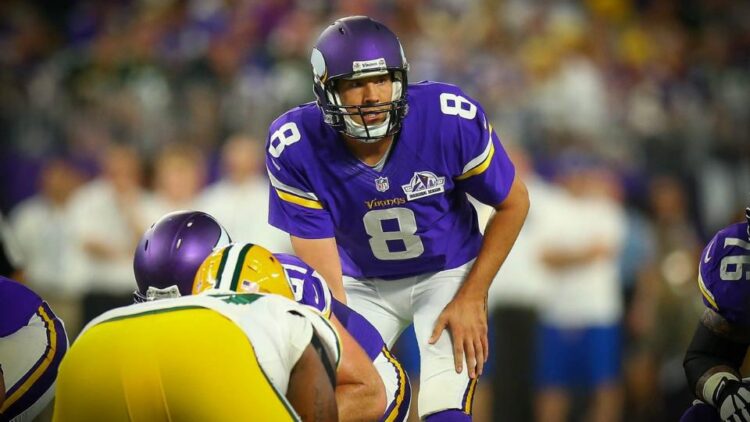 Minnesota and Green Bay formally began hostilities on October 22, 1961, in a Week 6 tryst. A 21-year-old rookie named Fran Tarkenton tossed three interceptions and no touchdowns as the Packers flogged the Vikings 33-7 in their maiden match-up.

In that contest, the two teams squared off at Metropolitan Stadium in Bloomington, Minnesota; one week later, the teams played again, this time at Milwaukee County Stadium. Green Bay was victorious in this game, too, downing Minnesota 28-10.

Head coach Norm Van Brocklin’s purple team got off to a wobbly start versus their cross-state rivals but this is to be expected, to an extent, for an expansion team. The Packers had been around since 1919, a full 42 years before the Vikings inception.

This analysis will examine the rivalry in 20-year segments. Since the Vikings came on the scene eight months after John F. Kennedy’s inauguration to the presidency, they own the seventh-best win percentage in the NFL, 509-433-11 (.540).

The Packers top this by four notches as the league’s fourth-best franchisewith a win percentage since 1961 of 532-40-15 (.566). Of course, Green Bay has won four Super Bowls whereas Minnesota is winless in this regard.

Interestingly, the Packers and Seahawks are the only NFC franchises in which the Vikings do not hold a winning record. Down the line, Minnesota has a win percentage north of .500 or better against each NFC team.

What’s more, the Seahawks inclusion to this metric is slightly jaded by its previous residence in the AFC. Minnesota has played Seattle 16 times in 59 years. The Vikings and Packers have locked horns-into-cheese 119times. Quite a discrepancy.

For those Vikings loyalists around during this era, this was the golden era of Vikings versus Packers football. Aside from a tumultuous, early start to the teams’ famous rivalry, Minnesota largely handled the Packers in the first two decades of the Vikings existence — about 60 percent of the time.

This outlier-of-sorts prosperity is attributable to three main factors: head coach Bud Grant, the renowned Purple People Eating defense, and the quarterback play of Fran Tarkenton of Joe Kapp. And more so Kapp than Tarkenton, believe it or not.

The Packers were so dominant early on that they won all six games of series versus the Vikings. Minnesota returned the favor, however, between 1973 and 1978 winning seven straight.

Fran Tarkenton was average, to put it euphemistically, against Green Bay. As a whole for his Hall of Fame career, Tarkentonboasts an 80.4 passer rating, which is excellent for his era of football.

Against the Packers, though, his passer rating sank to 74.6. So, nothing grotesque, but he certainly did not play betteragainst Green Bay. On the other hand, signal-caller Joe Kappfinished his career with a 5-1 record against the Packers.

To speak of only quarterbacks during this era is downright unjust. The Vikings took care of business versus the Packers in their first twenty years due to transcendental defense and the leadership of Bud Grant.

Assuredly, offensive players like Mick Tingelhoff, Chuck Foreman, Ron Yary, and Gary Alderman were vital, but the entire two decades were marked by devilishly-good defense. That is why they are, to this day, likened to cannibals.

The 1970s were the magnum opus of the Vikings performance against their green and gold foes — holding a 15-4-1 (.775) claim to the series during the decade.

Just as the 1970s were the sublime days for the Vikings versus the Packers, the 1980s were a decade of decadence, and not in a cool, sought-after Mötley Crüe way. Minnesota was a cringeworthy 5-14 (.263) against Green Bay in the 1980s. The uptick in the win column for Minnesota did not start until Brett Favre arrived in Wisconsin, which is astounding.

The Vikings displayed an uncharacteristic patch of mediocrity in the 1980s. Facing the Packers did no favors in remedying the downtrodden performance.

Green Bay orchestrated its 1980s opulence versus Minnesota with play from players such as quarterback Lynn Dickey, wide receiver James Lofton, linebacker John Anderson, and cornerback Mark Lee (and Lee was probably the best of all packers from 1980s). For Minnesota, this was the era of safety Joey Browner, and linebacker Scott Studwell, — with the likes of Tommy Kramer and Tim Irwin on offense.

Strangely, the 1990s were dramatically better for the Vikings. Favre brought his Tony Stark persona to The Badger State, and Minnesota was unfazed by it. During that decade, the Vikings landed a 12-8 win-loss against their meat-packing foes.

Thank you cards can be sent to the estate of head coach Dennis Green, wideouts Cris Carter and Jake Reed, guard Randall McDaniel, and defenders John Randle and Chris Doleman for the reversal of fortune.

But it would not last long.

As Brett Favre got older, he played significantly better versus the Vikings. If one considers the last 20 years “recent,” the last two decades have been the most lopsided years of the rivalry.

While Favre closed down his tenure in Green Bay, he got stronger versus Minnesota. From 2000 until his departure to the New York Jets, Favre and the Packers defeated the Vikings 11 times in 17 contests.

Now, follow this: Favre briefly joined the Jets — Minnesota and Green Bay split the series for that one year. Favre, incredibly twisting the plot, came aboard with the Vikings and they downed the Packers twice in 2009. And then at age 41, he returned to Minnesota in 2010 for unfinished business — and the Packers swept the Vikings in that season. Emotionally, it was a topsy-turvy 36 months.

Minnesota’s good performances versus Green Bay went cliff-diving thereafter. Current quarterback Aaron Rodgers has made Brett Favre’s production seem pedestrian. Rodgers has tallied a 14-8-1 record (.630) versus the Vikings including a vulgar 107.2 passer rating. In 23 games, Rodgers has tossed 43 touchdowns to 7 interceptions versus the purple and hold.

The course slightly reversed since Mike Zimmer was hired as head coach in 2014. Zimmer’s team is 5-6-1 (.458) against Green Bay in the last six seasons, which is certifiably more admirable than the previous 14 seasons of the new millennium.

Also of note during this two-decade time frame: the Vikings and Packers split a pair of playoff contests. Minnesota stunned Green Bay at Lambeau Field in the 2004 NFL playoffs.

The Packers returned the favor in the 2012 postseason when Rodgers and friends took advantage of a wide-receiver-turned-quarterback named Joe Webb who was filling in for injured quarterback, Christian Ponder.