Vikes to have line finalized by mid-week w/ Elflein at RIGHT guard? 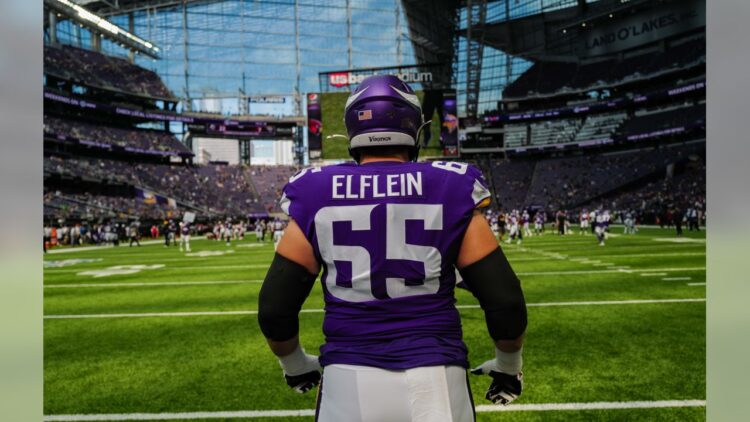 If anything set Vikings Twitter/my brain on fire this training camp it was the announcement by “new” Minnesota Vikings offensive coordinator Gary Kubiak that left tackle Riley Reiff was going to stay at left tackle and that, essentially, the team was also keeping left guard Pat Elflein set at guard to start camp.

Many, who either thought that Reiff would slide over to guard and rookie tackle Ezra Cleveland would take over on the left side as he has been favorably compared to right tackle Brian O’Neill.

Considering that the Vikings’ offensive line was ranked 27th against the pass rush in 2019 with right guard and current free agent and source of over $4 million in dead cap space the next two seasons Josh Kline.

Kline was, alongside O’Neill, the lone bright spot on the line in 2019 and many thought that if the team could find a suitable left guard in the draft that the line could actually have something positive for the first time since 2017 (depending on your thoughts about that line and then quarterback Case Keenum’s ability to evade pressure).

Reiff, on the other hand, has been relatively mediocre at the left tackle spot despite his big paychecks and many had hoped that he could bring that mediocrity to the left guard spot and that if Cleveland had anywhere near the level of rookie season that O’Neill did, the Vikings would be set!

But that wasn’t the case, as Kubiak pointed out. However, there is a new wrinkle to the battle for the interior of the Vikings as Chris Tomasson of the Pioneer Press pointed out.

Vikings getting O-line line in order, and it could feature Pat Elflein at right guard

Friday was the first practice open to the media, sans us, as constantly pointing out what you perceive as the team’s flaws apparently doesn’t endear you to the team?

As Tomasson pointed out, former center turned left guard Pat Elflein who famously claimed as a rookie that he was more comfortable playing guard than center, started Friday’s practice at RIGHT guard.

That is monumental news as the disappointment that reverberated through Vikings internets was mainly due to the continued presence of Elflein at left guard more so than Reiff being moved to left guard (although that is part of it, albeit arguably unfairly).

That leaves the competition for right guard hopefully sealed, as Elflein should be much more capable of handling the right side than the left. However, 2019 Draft pick Dru Samia could give him a run for his money as he was a fourth round pick and thus one of the higher drafted guards in recent Vikings draft history and was part of the best offensive line in the country during his final season at Oklahoma.

That leaves the competition on the left side between Dakota Dozier and Aviante Collins, with rookie tackle Ezra Cleveland helming the position for the second team. While Kubiak made it sound like Cleveland was getting reps for reps sake (and seemed relatively uncomfortable in doing so), it’d be amazing if he was able to contribute at the spot as Riley Reiff hasn’t had anyone competent next to him since Nick Easton in 2017.

While anyone would be better than 2018’s Tom Compton or Elflein, Cleveland is particularly enticing based on his comparisons to the thus far amazing O’Neill and the fact that both Dozier and Collins have been on the roster and you’d think that if they could’ve contributed by now they would have (considering the contribution or lack thereof by Compton or Elflein).

While I am still hoping that the team brings Kline back (as having depth would be nice and he had a tremendous impact on Dalvin Cook’s breakout campaign).

But the Vikings are at least attempting to break the mold here, which is better than attempting to do the same thing while expecting different results. Considering I just wrote over 5,000 words this week about that very fact, you can say that I’m intrigued and… Dare I say it… Hopeful?!?!

Let me rephrase that. I am at least more hopeful than I was 48 hours ago. Considering where I was then, I mean, just look at some of my recent articles/further examples as to why I wasn’t at that practice yesterday:

Reiff open to moving to guard, but does it really matter?

Reiff open to moving to guard, but does it really matter?

So. There you have it. The first sign of the apocalypse! Now if the team wins the Super Bowl I’d suggest selling all your earthly possessions just to be safe.