This NFL.com Cousins ranking is why analytics aren’t everything

Note: I too, am clearly a nerd. I started going to high school in 7th grade for (mostly) math. So, I was joking.

Nothing has taken the NFL media (and coaching) world by storm in the past few decades like analytics. Sites like Pro Football Focus, ESPN’s QBR, NFL’s Next Gen Stats, and more have changed how we analyze the game we all love while also creating the environment that can only be summed up by this clip:

NFL.com has a QB rating system that most people respect, but I don’t. I’m not an analytics guy by any stretch of the imagination, and I know that most people consider me to be a Kirk Cousins apologist. But, to have Cousins listed as the 14th best quarterback in the league?

I know this isn’t the end all stat, but Cousins has more touchdowns than seven players listed above him, which is more impactful than usual because of the run first approach the Vikings employ (which, as we saw in the Buccaneers game, limits the amount of red zone opportunities by a factor of at least 3).

I get into that, here:

If Diggs was “right”, then why did he lie?

So, when I see that people like Matthew Stafford or Baker Mayfield are listed above him when they trail him in every category listed?

Let’s take a look at PFF’s top 14 for comparisons sake: 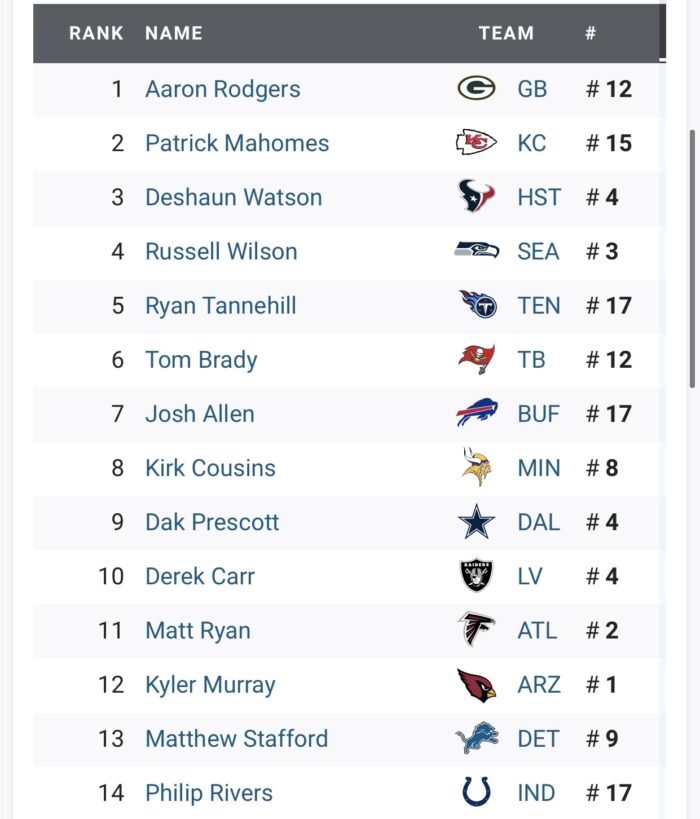 PFF takes the above into account, and also takes into account the fact that Cousins started out ROUGH before the bye but since has been one of the best quarterbacks in the league.

So, there’s a reason that guys that I respect (enough to add to our payroll) combine things like the NFL list, PFF and ESPN’s QBR. Even if those numbers aren’t weighted for play in the past… Six or seven games.

I understand that that’s not how football works, but I do think that if we were grading these QBs going into their next game? There are some quarterbacks that I’d take over Cousins, but not 13 of them.