The Wilf Family are exactly what the Timberwolves need 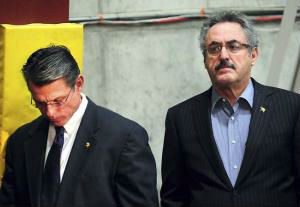 It’s been widely reported that the owner of the Timberwolves, Glenn Taylor, is exploring the sale of of the team he’s owned a majority ownership stake in for over 25 years. Those same reports have said that there are essentially two major groups that are in the lead to take over Minnesota’s most maligned pro sports teams, one headed up by Wolves legend Kevin Garnett, and the other being the Wilf family (current owners of a team you may have heard of).

Now, it’s hard to argue against Garnett owning the team he helped legitimize and then take to its highest highs, especially as it was reported that he and former head coach Flip Saunders had hoped to eventually do just that before Saunders’ untimely death.

So, I am not doing that.

Instead, I’m making the argument that IF the Wilf’s end up outbidding KG and his rich friends, it would be a huge positive for a team that is in desperate need of change.

Before we get into it, I should mention that I used to be a Wolves season ticket-holder back during the KG era, and that they were essentially the 1B to the Vikings 1A in terms of my sports obsessions.

So much so that I planned on launching a WolvesPTSD.com alongside purplePTSD.com back in 2015, but wanted to wait until I had the Vikings game on lock. So, stay tuned NBA fans in the year 2050!

As a former hardcore Wolves fan, I’ve always felt that Taylor was a good owner in terms of resources but that he always seemed to trust the wrong people.

A lot of people point to the Stephon Marbury situation as what knee capped the KG era and while it didn’t help, the salary cap evasion Taylor and then general manager Kevin McHale embarked on for the very mediocre Smith cost the team FIVE first-round picks (although it ended up “only” being four). In a league with only drafts that consist of two rounds, it’s actually a testament to KG’s brilliance that the team wasn’t terrible in the early ‘00’s.

That’s the most egregious example, but there were many times where it felt that Taylor would spend money in ways those of us in Minnesota weren’t used to (especially during the elder Pohlad and Red McCombs eras), but that that money wasn’t translating to success.

But, considering we were used to the Twins under the elder Pohlad, and the McCombs way of showing ‘Purple Pride’, it was hard to complain about Taylor, especially after he forked over what was needed for Latrell Sprewell and Sam Cassel to come to town in the magical year of 2003.

Now? The Wolves are coming off of a (half) season in which they essentially traded everyone but neo-KG, Karl Anthony-Towns to keep Towns, bring (neo-Stephon Marbury) DeAngelo Russell to town. While that was needed from a roster perspective, it also was needed for a franchise that seemingly was out of answers.

That is most likely the impetus for the sale in the first place (along with the massive paycheck Taylor will receive for the sale of a franchise in the country’s fastest growing professional sports league). Taylor has to be frustrated, as he has done everything he could to make the Wolves successful from a financial perspective.

But this is Minnesota and while we don’t see this very often in the NFL, it’s hard to get NBA players to sign in the upper-midwest. There have been times where Taylor and the Wolves have offered more money, but simply can’t compete with the glitz and glamor of places like … Oklahoma City?

Perhaps that was more of a problem ten years ago, when the team was trying to sign players like Juwan Howard. But still, it’s clear that despite his best efforts, a change is needed if the Wolves are going to compete (both on the court and for the attention of the sports spoiled Minnesotan).

Enter the Wilf family, who like Taylor have done everything the right way from a financial perspective.

After inheriting a team from McCombs, the cheapest owner this market has ever endured, the Wilf’s built the best NFL facilities in the world in Eagan, Minnesota. When McCombs owned the team you’d be lucky if the bathrooms under the stands would be unlocked during camp at Mankato (and/or that random pop machine would be plugged in).

Sure, the Wilf’s also received a stadium that was mostly paid for via public funds, but they also stepped up to pay for upgrades and fixes that others might not have.

The difference between the Wilfs and Taylor is that they also have surrounded themselves with people that make the right decisions when it comes to how their money is spent.

Sure, the Vikings have yet to get over that final hump like the KG era Wolves (and their record of consecutive seasons making the first round (solely) if the NBA playoffs). But they’ve maintained a level of success that even as one of the top teams in league history (in terms of winning percentage) we’re unaccustomed to. The window of opportunity in my lifetime seems to open once every 7-9 years and then slam closed in heartbreaking fashion.

The NFC Championships in 1998 and 2000 were heartbreaking in their own ways, but thanks to McCombs’ investment in the team/defense (or lack thereof) the Vikings’ window slam closed until the magical WILF owned 2009 squad (in which they opened their checkbook to bring Brett Favre to town).

Since then, the Vikings have been a contender since 2015, with a NFC Championship appearance in 2017 that was followed by the (then) largest contract in NFL history. The Vikings of yesteryear typically imploded the year after a NFC ‘ship drubbing. 2001? Awful. 2010? Let’s not talk about it.

Yeah, the Wilf’s owned the team in 2010, but they’ve learned from it and have kept the current (or recently closed?) window open with a combo of free agency spending and bringing in NFL legends like Norv Turner, Tony Sparano, and Gary Kubiak to fill coordinator positions. That aint cheap.

Taylor also broke the bank, with KG and even Marbury getting huge deals (although Marbury was unhappy his $90 million-ish deal wasn’t as big as KG’s $120m deal, as he thought he was the one taking the shot at the end of games and thus he should be paid more), but again, couldn’t see that McHale was …. just bad.

Perhaps its luck, but the Wilf’s have shown the willingness to reinvest the money they make from the team they own ON the team itself, with a heavy focus on creating world class facilities and in turn a world class organization.

That sounds like exactly what the Wolves need, and while the fan in me wants KG to buy the team, it’s hard to argue against the Wilf family as they’ve seemingly done everything right (outside of their handling of the Adrian Peterson controversy).

Although, considering that KG has the mind of a coach and a passion rarely seen in the league combined with the experience of seeing the shortcomings of the Taylor era first-hand, the good news is that the future of the Wolves seems like it’ll be in good hands regardless of who wins the bidding war.

That is unless Red McCombs somehow scrapes together his used car and billboard money to buy the team. Considering Taylor has made it a point that the new owners keep the Wolves in Minnesota, McCombs probably won’t be interested (although the San Antonio “Davy Crockett’s Corpses”, “Ozzy Osborne circa 1980’s Urines”, “We’re only famous for losing to Mexicos”, or “Cheapskates” all have a nice ring to them).

Point being, we’ve really been lucky to be fans of a team owned by the Wilf family, as they are good enough at what they do to not rely on the Vikings to sustain their lifestyle and because they understand that the more they invest in the team the more engaged we become. But that requires an organization that is equally good at what it does.

The Vikings have been lucky to have Rick Spielman and Rob Brzezinski running things, as you can’t just spend your way to a good on the field (or court) product in a league with a salary cap.

Coming from an owner in Taylor who only satisfied half of that reality, I’d feel a lot more comfortable with the Wilf family bringing that acumen to the Wolves than anyone else.