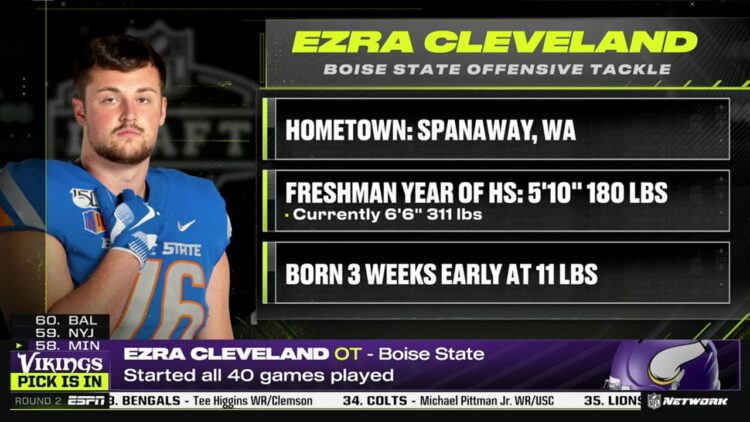 Leading up to the NFL Draft there were few larger enigmas than Boise State’s Ezra Cleveland. Just look at this article from the spot on draft resource that is WalterFootball.com. That piece highlighted the gulf that seemingly existed from team-to-team in the NFL when it comes to when/where Cleveland may have been drafted. Granted, the piece was from about a month ago, but it conveys the difference in opinion surrounding the three-year starter out of Boise State.

Where this isn’t that difference in opinion is here at VikingsTerritory.com/purplePTSD.com. Both of our draft experts in Kirby O’Connor and DeShawn Vaughn are absolutely enamored with the pick of the 6’6″ and 311 pounds, sub-5-second 40-yard dashing tackle out of potato country.

O’Connor stated that Cleveland was at the top of his second-tier of tackles, so let’s see how that stacks up on other networks. The aforementioned WalterFootball.com ranked Cleveland as their 11th best tackle in the draft and had him projected to be taken somewhere between the second and fourth round(s).

“I think the Ezra Cleveland selection by the Vikings is a very solid pick. Good feet and a solid athlete. He has a very good upside and room for improvement. I am sure Coach Rick Dennison is thrilled to get Ezra in his meeting room or on his Zoom or Skype.”

Beyond that, Tice expanded his thoughts on the draft overall by saying:

“Rick Spielman and his staff have done an excellent job so far in this draft.”

A lot of the national media coverage for Cleveland focused on his surprising 40-yard-dash time and that he should’ve perhaps returned to the NCAA for his final year,

It’s no secret that the Vikings have needed help on their offensive line for years now. The Cleveland pick is the third first-or-second round offensive line pick in as many seasons with the Vikings drafting center Garrett Bradbury in the first-round last season, and right tackle Brian O’Neill in 2018. The pick of Cleveland (Bradbury and O’Neill) signals that the Vikings powers that be in general manager Rick Spielman and Mike Zimmer realize that if there’s any chance for this team to get over the hump (and for at least one of their contracts to be extended beyond 2020) they need to focus on the unit that has been their Achille’s heel since before former left tackle Jake Long’s season/career was ended because of his Achille’s heel.

This still leaves massive question marks on the interior of the line as the Vikings’ former center (and third-round pick) Pat Elflein struggled mightily after being moved to (what he said was his more natural position) left guard. Beyond that, the team released right guard and free agent pick up Josh Kline, a player who missed a few games due to multiple concussions in 2019 but was part of the only bright spot on the line in 2019 along with Brian O’Neill (at least as far as the run game was concerned).

Speaking of that run game, that very well may be what drew Cleveland to the Vikings who now have Gary Kubiak (and offensive line coach Rick Dennison and the newly hired Phil Rauscher) and his zone blocking scheme.

Cleveland’s number one strength according to his NFL.com draft profile is his “[ability] to make all outside zone blocks in the run game”. Consider the fact that head coach Mike Zimmer has wanted to be a run first team during his entire tenure and you’re starting to see why the purple valued Cleveland so high.

The negatives are all things that should be able to come with time, work and coaching. Some of the larger concerns relate to “mass” and “strength”, all things that come with age and by working out and eating as planned by the team and it’s trainers. He sounds a lot like another young, project-y tackle that is already on the Vikings’ roster and that player is Brian O’Neill.

O’Neill was thought to be a multi-year project but was thrust into the starting spot early into his rookie campaign. Hopefully with left tackle Riley Reiff on the roster that’s not something that Cleveland will have to do, as he can instead sit behind Reiff and learn while also eating about 5,000 calories a day and lifting hatchbacks over his head.

Let’s hope that the Vikings add another pick (or two) on the interior of the line with their remaining 11-picks, although if Dru Samia (who was drafted last season and spent the year as a depth guy) is able to contribute positively to the Vikings in 2020 there may be… Knock on wood… An actual young, internally developed offensive line during the Zimmer regime.

What do you think of this, or any of the Vikings’ picks thus far? Click HERE to comment on our NEW message board, or you can chat below!