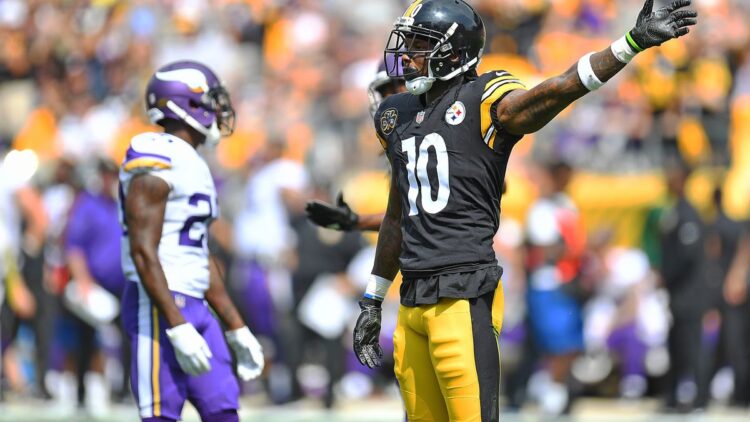 The Vikings lost arguably the best 40+ yard playmaker in the NFL when they traded Stefon Diggs to the Buffalo Bills this off-season, and despite using one of their first-round picks on stat monster Justin Jefferson back in April, still have a glaring need for a deep threat receiver on their roster (as Jefferson primarily ran routes out of the slot at LSU (and primarily I mean over 99.5% of the time)). Their only other deep threat receiver, Adam Thielen, did most of his damage on deep balls out of the slot, so the need for a deep ball receiver may have been made worse by the drafting of Jefferson (despite his claims of being a more well-rounded receiver than his time at LSU has shown).

Or should I say, RE-Enter former Steelers and Raiders receiver, Martavis Bryant?

Bryant has been suspended multiple times in his career for violating the NFL’s policy on substance abuse (or missing drug tests, or violating terms of his reinstatement) including for the entire 2016 season, but has applied for reinstatement this week. The big bodied receiver, at nearly 6’4″ isn’t a burner (with a 4.42 40-time) but he has amazing control of his body and is essentially as fast as Stefon Diggs was.

As a rookie (in 2014) he averaged a whopping 21.1 yards per catch and ended that year with 8 touchdowns and 549 yards. He topped that yardage in each of his next (playable) seasons, with 765 yards in 2015 and 603 yards in 2017 (after missing the entirety of the 2016 season due to a suspension for violating the league’s substance abuse policy).

Those suspensions arose from Bryant’s use of marijuana, a policy that the league recently softened to reflect a more relaxed attitude toward marijuana on a national level (albeit on a state-by-state level as the federal laws haven’t changed). The new CBA will reduce the testing period from four months to the two weeks at the start of training camp. A new threshold for a positive test will also be put in place, raising the allowed amount of THC from 35 nanograms to 150 (per SportingNews.com).

Punishment is also less severe for players that go beyond that threshold. Again according to SportingNews.com:

The league is moving away from a punishment approach and toward providing help for those that need it. If a player tests positive during the two week stretch of training camp, his test is reviewed by a board of medical professionals that have been appointed by both the players and league. The board then decides if the player needs treatment.

It’s clear that Bryant most likely falls into the “needs treatment” area as he hasn’t shown the ability to stop smoking/using marijuana even when his career is on the line and while that treatment could mean more time away from the field, it’s nice to see the NFL reflect the real world when it comes to substance abuse and, at least in this instance, move away from a punishment based model and embrace a treatment based one.

While people will swear up and down that you can’t become physically addicted to marijuana, you can become mentally dependent on it and that’s why you have situations like Bryants. Back to whether or not the Vikings should sign him, his ability to stretch the field and create big plays is something that this Vikings team will need in 2020 and beyond and there’s relatively little risk to signing Bryant, assuming he’s reinstated for the 2020 season.

It’s hard to think that he’d get anything but a one-year prove-it deal from any team in the NFL and while the Vikings may still be reeling from the signing of Michael “Kombucha” Floyd, in the end there was little risk to signing him, too.

The reward, however, could be mighty as the Vikings could have an amazing trio of receivers with Bryant, Thielen, and Jefferson, who would be allowed to primarily play in the slot as he did in LSU as he acclimates to the speed and strength of defenders in the NFL. The flipside would be hoping that he could do something he seemingly struggled with in college, which is play on the outside more often than not (due to the need th Vikings currently have), which would take away from what he’s shown he’s really, really good at during his time at LSU.

That’s not to say that the team shouldn’t use Jefferson on the outside. It’s just that with Bryant on the roster they wouldn’t necessarily HAVE TO more often than not, which would allow Jefferson a lot more leeway in his development in terms of both pressure and need. By having Bryant as the true deep threat/big-bodied receiver, Jefferson could split time in the slot/on the outside with Thielen, which would give Vikings offensive coordinator Gary Kubiak a ton more options when it comes to play-calling, as well.

Bryant is used to being a complementary receiver, playing alongside Antonio Bryant during most of his time in Pittsburgh. He’s also good at drawing penalties, something the Vikings found out first-hand during their September 2017 game against the Steelers in which Bryant had three catches for over 90 yards and a 49-yard pass interference penalty that Trae Waynes had while covering him (which lead to a touchdown). That means that Bryant checks all the boxes one could want from their WR2/3, outside of the repeated substance abuse issues, of course. But, you wouldn’t expect Bryant to pull a Diggs and demand more balls, nor would you expect him to have issues co-existing with Thielen and Jefferson.

If the Vikings were looking for an extremely gifted but affordable wide receiver to fall out of the sky this off-season then it’s safe to say that Bryant is that guy. If you’re not sold, just take a look at some of his highlights and tell me that you wouldn’t be enamored with him should the Vikings sign him to a one-year deal for under $4 or $5 million a season.

What do you think?

Let us know in the comments below!