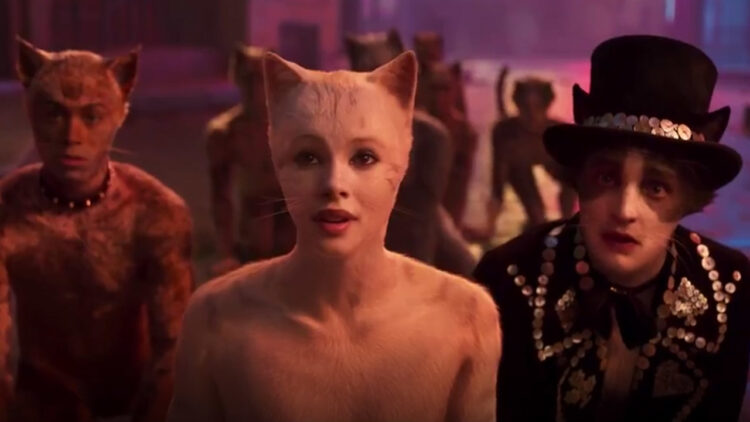 Note from the Editor: This is Part 1, to view Part 2, click over to our sister-site purplePTSD.com by clicking Here. To discuss this article and any Vikings news, click Here.

What was the scariest movie of 2019? IT 2? Midsommar? The Curse of La Llorona?

Cats the movie was based on the wildly successful and legendary play which, as of 2012, made $3.5 billion since first opening in 1981. The production has accrued numerous awards and praises and is currently the fourth-longest running Broadway show and the sixth-longest running show in London.

What better play to base a movie on, right?

Cats cost $100 million to make, and recently closed their eight-week domestic run after making $27.2 million. I’ll save you the time, that’s a loss of $72.8 million.

The movie should have been much, much better, but Universal Studios trusted a graphic design studio for the animation that apparently shared office space with an opium den. The CGI fur-covered humanoid creatures are a horrifying sight that comes straight from the depths of hell. No one should be subjected to this optical waterboarding and anyone unfortunate enough to be exposed to this atrocity is without a doubt worse off than they were only 2 hours prior.

But here’s the thing –  it should have been better.

A legendary and acclaimed story. A big-name studio willing to put up $100 million for production. A cast filled with Grammy and Oscar award nominees and winners such as lan McKellen, Judi Dench, Taylor Swift, Jennifer Hudson, Idris Elba.. the list goes on.

They underperformed. They had the talent and resources to do better but fell absolutely flat.

While contemplating Cats and thinking of ways to get the movie out of my head without giving myself permanent brain damage, I was inspired to compile a list of NFL teams of the past 20 years who didn’t play up to their potential.

I call it the “Cats” list. Teams that had the talent and ability to have a better season but severely underperformed.

These teams were ranked by using the Pythagorean winning percentage (not other lists which use data from things like the Sportsbook app from betrivers).

The Pythagorean winning percentage is a fairly simple equation that uses a team’s points scored and points against for a period of time and gives a winning percentage, or a record, that the team should have achieved. It is a commonly used formula that was first developed in baseball but has since expanded to all the major sports.

Using this formula, you can go back and see how teams should have performed versus how they actually performed.

formula their expected record is 10.07 – 5.93. There are certain situations when that record isn’t achieved. Was the team plagued with horrible play calling? Did the team miss a tremendous amount of field goals? Did the team consistently lose games by thin margins?

An important distinction – these are teams who should have done better but didn’t. Teams who should have more wins based on their production during the season, not teams who underachieved their preseason expectations. For example, you won’t find the winless 2008 Lions on this list (although they were very close) because that team was so unbelievably trash. They deserved every single one of their 16 losses.

Below I have the list of teams who should have done better. Teams who had the skill and talent to reach a certain record but fell much below expectations.

Coming off a 12-4 season in which they won a playoff game in the Wild Card round against the Baltimore Ravens, the 2019 Los Angeles Chargers were nothing short of a disappointment.

On paper, this was a good team.

On the offensive side, they ranked 10th in overall yards. Their attack was led by Phillip Rivers who finished 4th in the league in passing yards, and quite nearly supported three 1,000+ yard receivers in Keenan Allen (1199), Mike Williams (1001), and Austin Ekeler (993).

On the defensive side, they ranked 6th overall in yards allowed. Their unit, led by pro-bowlers Joey Bosa and Melvin Ingram on the defensive line, gave up an average of 21 points a game, ranking 14″ in the league.

From what I can tell, the underperformance of the 2019 Chargers comes down to three things:

-Rivers was too hot and cold. He finished the year 4th in passing yards, but also finished 3 in interceptions, seven of those interceptions coming in the red zone. It’s like he dedicated every interception to one of his kids.

-9 of their 11 losses came by 7 points or less. Heartbreaking losses coupled with hostile environments every game, running back drama, and playing for a franchise that has no true home and no positive outlook had players day-dreaming about Cabo come mid-November 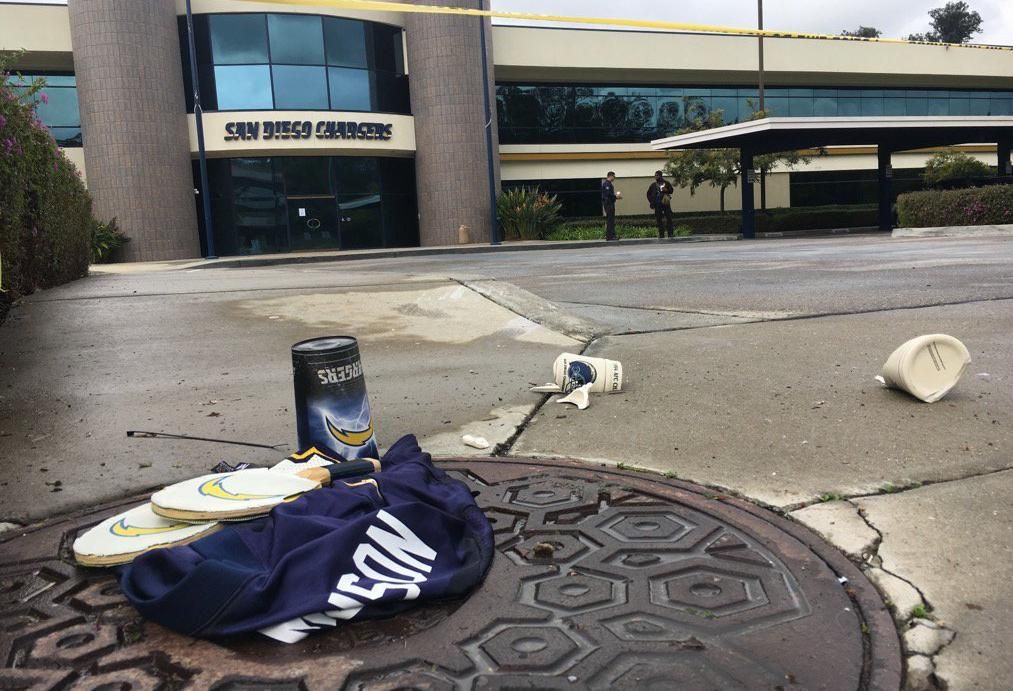 The 2000 San Diego Chargers cemented themselves in history by being one of only 10 teams in NFL history to finish the season 1-15. The fans expected much better after a 2-8 Season in 1999 but instead were making bleach cocktails not even halfway through the year.

It is best to describe the 2000 San Diego Chargers with a “The Good, The Bad, and the Ugly” chart

The team was somehow able to make a few of the games watchable. Six of their losses came by three points or less including losing their first two games by a combined four points. The football bounces the other way once or twice and this team could have tripled or quadrupled its win total.

Their defense, while giving up the 3rd most points in the league, ranked 13th overall in yards given up. The unit was led by linebacker Junior Seau who made the Pro-Bowl every year from 1991-2002.

The offense was extremely inconsistent. They ranked 26th in the league in total offensive yards with 4300, and part of that was due to the quarterback play.

They had three different quarterbacks line up under center during the season: Ryan Leaf, Moses

Moreno, and, in this week’s episode of “obscure sports trivia”, Jim Harbaugh. This was Harbaugh’s last year in the league and one he would like to forget. As a combined group they threw for 3540 yards with 19 touchdowns and 30 interceptions.

After the season they released Ryan Leaf, who will go down as one of the biggest busts in NFL history. Leaf was selected second overall in the 1998 NFL Draft by the Chargers and started 21 games in his career before flaming out of the league.

For the 2000 season, the Chargers as a team put up 1,062 total rushing yards. To put that in perspective, that is the lowest rushing yards for any team in a 16-game season. To put that even further in perspective, the 1982 season was shortened due to lockout and every team played only nine games. 13 teams during that season rushed for more yards in nine games than the 2000 Chargers did in 16 games.

In 2006, the local media was flooded with rumors of head coach Nick Saban leaving the Dolphins for the Alabama Crimson Tide. Saban vehemently denied the rumors the entire year and even proceeded to tell the media on December 21, “I’m not going to be the Alabama coach.” On January 8, two weeks later, he resigned from the Dolphins to become coach of the Crimson Tide. Cue the theme for “Curb Your Enthusiasm”.

In 2008, Bill Parcels took the reigns and completely transformed the team to an 11-5 powerhouse, winning the AFC East behind their revolutionary full-time implementation of the wildcat formation. Their formation proved to be a nightmare for opposing defenses and it remains the greatest single-season turnaround in NFL history.

The drama and dysfunction started instantly at the conclusion of the 2006 season, as Saban left the team and three players, Fred Evans, Kelly Campbell, and Chris Chambers, were arrested in the off-season.

From there, the theme of the Miami Dolphins was instability. Cam Cameron was hired as the head coach and made a myriad of staff changes, who were all subsequently canned after one season. Three different quarterbacks lined up under center during the season, combining for 3319 yards, 12 touchdowns, and 16 interceptions.

The offense and defense were both equally inept, ranking 28th and 30th, respectively.

The one bright spot from the season?

2001 started off perfectly for the Carolina Panthers. The Panthers received the kickoff to start the season in the Metrodome against the Minnesota Vikings and rookie receiver Steve Smith returned it for a 93-yard touchdown.

From there, it was a game of mistakes after mistakes for the Vikings. Their first seven drives went: fumble, punt, punt, interception, missed field goal, interception, punt.

The Carolina Panthers won the game 24-13 and were standing tall. They had just beaten the Minnesota Vikings, a team that had gone 11-5 the year before, in their own stadium. They were on top of the world and ready to compete against anyone….and then proceeded to lose 15 games in a row.

The 2001 Carolina Panthers perhaps might be the most forgettable team in history. That team looks more like it should be playing with Shane Falco (The Replacements, anyone?) than a group of professional football players.

The quarterback who started 15 games that year, Chris Weinke. played 20 games in his career, going 2-18.

But somehow, someway, this team should have been better.

This ragtag team lost six games by three points or less. In 2001 their division rivals included the St. Louis Rams, San Francisco 49ers, New Orleans Saints, and the Atlanta Falcons. Removing one blowout win vs. the Rams, the Carolina Panthers lost 7 games to division rivals by a combined 36 points.

In the end, this is a season both the Panthers and the Vikings would rather forget.

The 2016 Jacksonville Jaguars was the team right before their mini-resurgence in 2017. It was the calm before the storm and one year away from a slight break from perpetual mediocrity.

Fans will say this was the golden age of Jaguars football. You could pay $10 to use the pool in the stadium and as a bonus, you could watch a football game for free.

The problem with the 2016 Jaguars was not their defense.

The following year in 2017, the Jaguars had a phenomenal defense, leading the team to a 10-6 record and a trip to the AFC Championship against the New England Patriots, the Jaguars’ first appearance since 1999. Over the course of the season, their defense led the league in defensive touchdowns and ranked 2nd in: points allowed, yards allowed, turnovers, and sacks.

The seeds for that 2017 defensive performance were planted in 2016.

Cornerback Jalen Ramsey, defensive end Yanick Ngakoue, linebacker Telvin Smith, and defensive tackle Malik Jackson were all newcomers to the 2016 Jaguars by either draft or free agency, and they all made the Pro Bowl in 2017.

They were a year away from getting over the hump, and they would have this year If It wasn’t for the quarterback. Blake Bortles had a classic Blake Bortles year.

While he succeeded the next year in 2017 helping to lead the team into the playoffs, his 2016 campaign was nothing short of atrocious.

Bortles ranked 28th in QBR, 4th in overall interceptions, and led the league in pick-sixes. He consistently squandered chances and led the team to eight losses by seven points or less.