The Reverse Magic Number is 3 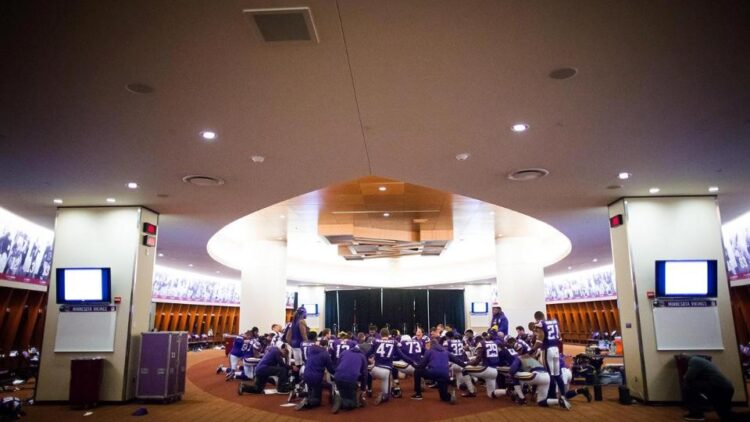 Vegas oddsmakers pegged the Minnesota Vikings as a nine-win team before the 2020 season. Don’t believe me? Google it, or you can get the affiliate code from any resource and if you have the stomach to check on your pre-season bet on these Vikings and their 2020 chances. But I’m here to say not to fret as while 9 games might be out of reach, the Vikings may not need to even break .500 to make the playoffs in 2020.

Hear me out.Through five weeks of games, that appears to be a generous allotment for Mike Zimmer’s confounding squad. As each defeat plops into the loss column, nine wins is a ceiling rather than a prognostication.And, those losses are amplified when they come at the hands of undefeated opponents – ones that the Vikings shoved up against the ropes. The Titans and Seahawks games were truly winnable affairs for Minnesota, but the team traveled back in time to extract snakebitten tendencies echoed in eras of yesteryear. Aside from kicker Blair Walsh missing a chip-shot field goal in January of 2016, the Vikings have largely avoided unadulterated heartbreak. To be fair, the team has lost meaningful games. But the last-minute, heartbreakers have severely minimized under Zimmer’s tutelage.Now, they’re back.The only solace with the recent heartbreakers can be taken with the regular-season nature of both games. Although the losses were crucial and counterproductive, they did not immediately end a season as did the 1998, 2003, 2009, or 2015 devastations.With each loss, the window of opportunity inches to closure. Minnesota deserved to lose against the Green Bay Packers and Indianapolis Colts in Weeks 1 and 2, but the Titans and Seahawks contests were there for the taking, to no avail.Thankfully, the NFL turned on the postseason spigot, and two extra teams will participate in mid-January football. This makes the allure of a Vikings turnaround more achievable, but time is running out. Minnesota can feasibly lose about three more games – and that’s it.“Guaranteed Losses”The remaining Vikings schedule – there are 11 games left – already “feels” like it has three unwinnable games afoot. Those are at Green Bay (Week 8), at Tampa Bay (Week 14), and at New Orleans (Week 16). It should come as no surprise that these are all road games.Some disclaimers: A lot can change from week to week. Ask the Dallas Cowboys. The Vikings have two weeks to prepare for their matchup with the Packers by the advantage of a bye week.Tom Brady is geriatric and could conceivably be hurt (more prone than youngsters) on any snap. And, the Vikings have shown they can topple the Saints when the entire budget has been gambled – see the 2017 and 2019 playoffs.Unless one wholeheartedly believes the Vikings are on the cusp of an eleven-game win streak, three losses are close to a sure-thing somewhere in this slate of games. The usual suspects are road games against good teams, and the Vikings have at least three of those. Side note: The guaranteed losses don’t even account for the Chicago Bears – a team that routinely finds a way to drag the Vikings into sloppy games. So, it’s quite grandiose to assume that Minnesota beats Chicago twice.Room for Error against Bad or Mediocre Teams is GoneThe overall moral of the story is that Minnesota will be required to defeat teams that are not playoff-bound. That also includes fringe teams like the Dallas Cowboys, Carolina Panthers, and the aforementioned Bears. The losses to Tennessee and Seattle erase any grace period for error. “Sneaky” losses like ones that might occur against the Jaguars or Lions are now inadmissible.The optimistic mindset suggests that this is doable. The Vikings showed they belonged in conversations with the Titans and Seahawks; not by win-loss record, but by a mono-e-mono, slugfest criteria. Good teams like Seattle make a living battering inferior opponents – not relying on last-minute heroism to notch a win. That’s precisely what they needed against the Vikings in Week 5.The other option is for the Vikings to be the sneaky ones and somehow upended the Packers, Buccaneers, or Saints. If they can accomplish one or some of those feats, then a loss to a mediocre team is less damning.9-7 Would Do the Trick – Maybe 8-8The new normal in the NFL is that a 9-7 record will get close to being a lock for the seventh-seed in the freshly formatted postseason. For example, the 2018 Vikings would have joined the playoff participants with an 8-7-1 record had this new playoff constitution been implemented two years ago.In the next 12 weeks of football, the Vikings must tabulate a win-loss record of 8-3 at a bare minimum. Waffling to an 8-8 record leaves the rest of the gig to chance and probably allows a different 9-7 team to pass them by.This is reality through five weeks. Minnesota must focus on replicating a 2010 Packers-like or 2007 Giants-ish postseason run. It’s not likely to materialize, but we must morph into merchants of hope.Keep track at home. Minnesota can afford to lose just three more games.