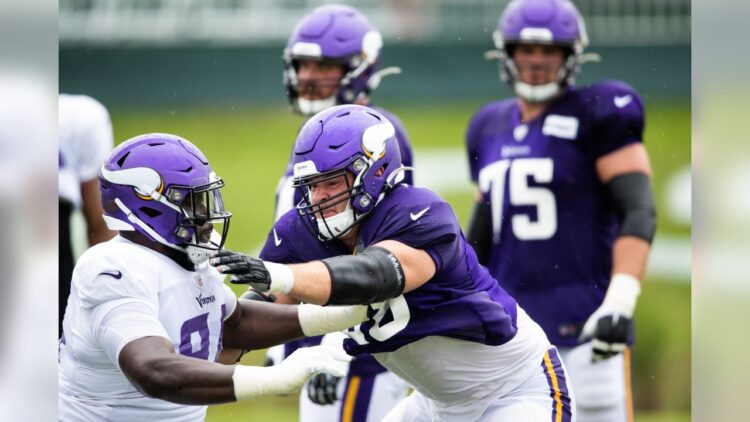 I just got off the phone for my weekly appearance on KLGR radio’s The Scoop with Seth Toupal. We spoke for about 35 minutes about whether or not we should be excited about the current Vikings, namely in terms of the sudden narrative floating around Vikings social media that the Vikings could make the playoffs yet in 2020.

While the 2-5 hole may be too deep for the Vikings to dig out of, even with the expanded playoff format, if the Vikings do end up making a run that’d lead to a playoff birth in back-to-back seasons for the first time in Zimmer’s tenure, there’ll be one position group we’ll point to as the reason behind that amazing run.

That unit? The offensive line.

I know, I’ve written about the offensive line so much that it was literally part of my introduction as I appeared on the ‘Load the Box’ podcast this week. But, for once, I’m not here to bemoan the unit.

Case in point, look at the top PFF grades for the Vikings against the Packers Sunday (courtesy of VikingsTerritory.com’s own Nick Olson):

That’s the most encouraging sign from the Vikings unit since before 2016 and if this unit can continue at this level, the Vikings very well could end up at or around the .500 mark (which depending on what happens in the NFC West, could be good enough for that last Wild Card spot).

The improvement that Vikings rookie Ezra Cleveland showed from his first game against the Falcons could also cement him as the answer at the right (or left) guard spot moving forward which, with how great Riley Reiff has played in 2020 could mean an extension there or a first-round pick for a left tackle of the future in 2021.

However, if Reiff keeps up his level of play, the Vikings could end up drafting a QB of the future in 2021. That QB could sit behind Cousins for a couple seasons and take over after Cousins’ 2022 season.

Then again, as I’ve argued for years, if you give Cousins time… The sky could be the limit for this Vikings offense considering how well Dalvin Cook has played on top of the talent the team has at every skill position around him.

Then again, this is just one game for Cleveland, but it’s hard not to get excited when you also factor in second-year center Garrett Bradbury and the potential return of Pat Elflein (which might move Cleveland to the left side, which is more natural for him anyway).

Either way, the fact that we’re talking about this unit in a positive sense is a story in and of itself. So, rejoice Vikings fans, as there are positive things to talk/hope and build around. Considering how things seemed a week ago, that’s amazing.