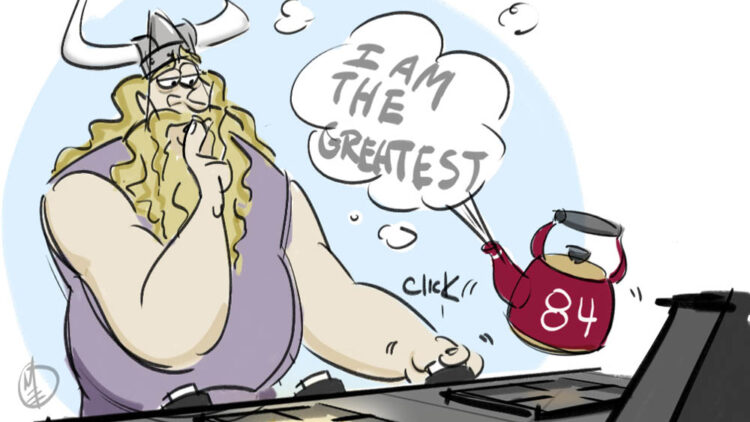 One of the funny things about being a Vikings fan, or rather (for the context of this story) the fan of a team that seems to find new and unique ways to murder the hopes and dreams of its fan base once every 7-9 years, is that the organization we all love somehow ends up with once in a lifetime talent somehow/someway perhaps not coincidentally during that same time frame.

Names like Adrian Peterson, Cris Carter, Fran Tarkenton, have all had their jerseys burned at one point in a heap with other memorabilia by some landscape architect names Gene. But among all of those amazing players there is one that rises above in terms of just how amazingly talented they are and that player is recent first ballot Hall of Famer, Randy Gene Moss.

Hey! Another not coincidence!

The reason Moss’ name is elevated above the other Vikings greats is because of how he changed the game. So much so that it has long been the belief of this writer that Moss was not only the greatest receiver in Vikings history, but actually the best receiver in NFL history.

That argument typically boils down to Moss vs. the golf standard for NFL wide receivers, Jerry Gene Rice. Okay, his middle name (probably) isn’t Gene, and I could use Google to confirm that… But… COVID?

The reason there hasn’t been any sort of resolution in the Moss v. Rice debate is that people don’t break down what they’re even arguing about.

In my experience there are really two basic arguments being had at any given time when (soon to be former) friends are being separated by their wives when discussing Moss and Rice and those two arguments are:

– Who was the most talented?
– Who was more efficient?

It’s impossible to argue that any receiver, nay, player has been more talented than the player dubbed “the Freak” during his time in the NFL. Although I’ve never heard it, apparently the term getting “Moss’d” is a thing football players say when a receiver burns a corner (or when a millionaire hits a meter maid with their car to turn a $35 ticket into a felony?). Then again, I just turned 36 and have the density and mass of a dying star, so I clearly don’t spend a lot of time playing pick up football.

Moss reportedly ran a 4.25 40, which at nearly 6’5” and the body control of a former gymnast turned web-cam girl and hands of a soon-to-be web-cam girl who still has one fantastic parallel bars routine left in her, Moss did things that no receiver ever had and maybe ever will again.

But that ignores how efficient Moss was, especially considering who he had throwing him the ball.

Jerry Rice on the other hand ran a Tredwellian 4.71 40, which is astounding in todays NFL and shows just how amazing he was at being a technician in a league that was less physically gifted than Moss’ NFL or especially todays NFL.

Route running, is one aspect of what made Jerry the so-called GOAT. The other? Has to be his work ethic. There are countless stories about Rice’s work ethic from those who played with him or against him. He was known even (or especially) at the age of 40 to outwork every other player on the practice field.

Moss doesn’t have that same reputation, mostly thanks to an entirely out of context “I play when I want to play” quote (that was a reference to whether or not prime time games made him try harder to which he replied the above, meaning that he was his own motivator, not Monday Night Football). Anyone who has seen the documentary “The Moss Method” can attest to his work ethic and drive.

Then there is the matter to the who. As in, who did Rice and Moss play with?

From his rookie year in 1985 to 1999, Rice played (mostly) with two quarterbacks: Joe Montana and Steve Young. Both are in the Hall of Fame and MAYBE outside of Brett Favre and Aaron Rodgers are the best back-to-back QBs for a franchise in league history.

When Moss finally landed with someone of Montana/Young’s caliber, he and Brady broke records. The 23 touchdown mark in a single season broke Jerry Rice’s mark of 22 touchdowns in a single campaign, although that season was ended early via a strike so technically Rice averaged more touchdowns per game in those seasons.

If you look at things like All Pro (first or second team), Super Bowl wins and appearances, league MVP picks, etc. Rice has Moss beat. But both are first ballot Hall of Famers, and you could argue that Moss should’ve been the league MVP at least in 1998 (and that anything that required sports writers to vote on had a lot of anti-Moss bias).

The fact that Moss never was even OFFENSIVE player of the year shows that he was never properly appreciated during his time at best (and at worst was lumped in with the antics of players like Keyshawn “Give me the Damn Ball so I can be Mediocre with it” Johnson and Terrell Owens).

Super Bowl appearances and wins are also contingent on who is around each receiver. So, we should look at per game stats for each to really figure out which receiver was the GOAT.

Again, considering Moss got those numbers with a collection of quarterbacks that were either terrible (Todd Bouman, Spergon Wynn) mediocre (Brad Johnson, Gus Frerotte), once great or perhaps only great (Randall Cunningham) because of Moss (Culpepper in 2004) and is close to Rice at all is a testament to his greatness.

Longevity is the other factor in this debate. Rice played at a high level for a long time, from 1985 to 2004 vs. Moss’ 1998 to 2010, and 2012. It’s that combination of his greatness, the greatness he played with as well as his willingness and ability to play nearly 20 seasons at a high level that means his records will most likely never be broken (even in today’s pass happy NFL).

Some may say that Moss loses points because of his attitude, but I could go through each “controversy” and either provide context or explain it away. The best example of his being labeled as trouble unfairly was the “Straight Cash Homie” nonsense.

People called for Moss to be traded after he told fans that had asked him whether he was at Winter Park to pay his $10k fine with a check. Moss replied that rich people don’t write checks, and when asked how he then would pay, he said “Straight Cash Homie”.

Vikings fans today love that motto and it has followed Moss since. However at the time people were angered, saying that Vikings fans were mostly blue collar and thus Moss’ boasts about $10k in cash were a “slap in the face”.

Sure, Rice wouldn’t be fined in the first place. But Rice also never played for a team owned by Red McCombs. When then head coach Mile Tice was on my podcast Morning Joes this off-season I asked him about whether Moss was this awful locker room cancer that people said he was at the time.

He said that he had never met a player that worked harder than Moss and that he was a great locker room guy that people loved.

Then there’s the question of who changed the game more. You could argue that outside of who he played with, it was also the system that Rice played in that buoyed his stats. At the time the West Coast offense was new and as it revolutionized the game, Rice and Montana benefited heavily.

Moss’ offensive scheme(s) as he once put it was essentially just “Moss, go deep”. On the other side of the ball it was Moss who changed how NFL defenses played (at least when they faced Moss). As ESPN.com notes:

“Moss forced opponents to develop and enhance new coverages to cover him. At the time, brackets, clouds and regular safeties over the top were exotic defenses rarely seen in the NFL. Moss forced them on a weekly basis.”

Beyond that, much like the Lebron vs. MJ debate (and the lack of hand checking in today’s NBA), Moss has openly pondered as to how Rice would’ve done against the defenses that defensive coordinators used against him.

Again according to ESPN.com:

Moss suggested that those defenses made it tougher to put up the kind of numbers that Rice did.”

Despite these changes, and triple coverages, Moss was part of the top two highest scoring offenses in league history (when he played with his best two quarterbacks in Cunningham and Brady… He also was instrumental in Culpeppers MVP runner-up 2004 season (in which he threw for 39 touchdowns)).

Despite all of the double and triple coverages not only did Moss overcome, but head coach Mike Tice wanted to ensure the Vikings’ success by getting Moss the ball 40% of the time. Say what you will about the Randy Ratio (and whether they meant throwing to him 40% of the time or also including plays in which he was a decoy), no other triple covered receiver gets the ball MORE.

Point being, Moss was simply unstoppable regardless of what the league threw at him, something that announcers like John Madden (who had seen it all) had noticed and exclaimed when first watching a young Moss against the Cowboys.

But I’ll leave you with this question to further solidify my point. If you were drafting a wide receiver right now (or picking one for your Madden team), who would you take?

Yeah, me too. Because we do know that Moss can be a first ballot HoFer that changed the game regardless of who tossed him the ball.

I’d just make sure he Uber’d to US Bank Stadium and used Paypal.