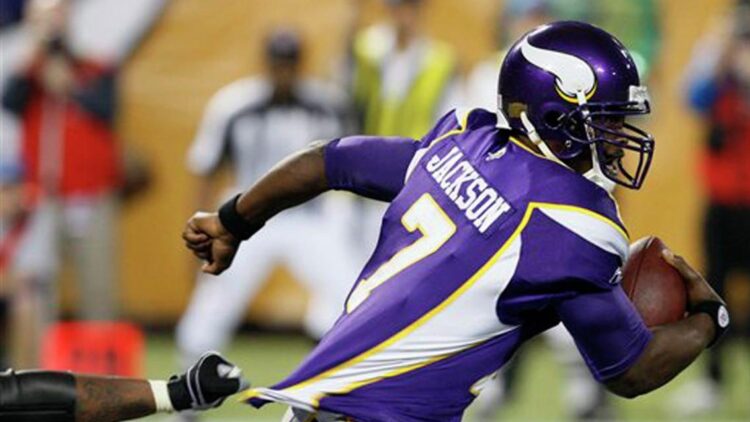 It has been reported this morning that former Vikings (and Seahawks, and… Ugh, Bills) quarterback Tarvaris Jackson died in a car accident in Alabama.

Former #Seahawks QB Tarvaris Jackson died last night in a car accident in Alabama, a spokesperson for his employer Tennessee State tells me. Jackson, 36, was TSU’s QB coach. Along with Seattle, he also played for the #Vikings and #Bills.

Jackson started his career with the Vikings in 2006, and was the pet project of then coach Brad Childress (who felt responsible for once great Eagles QB Donovan McNabb’s development). Jackson was with the Vikings until 2010, and was replaced and played behind Brett Favre who came in to capitalize on the otherwise good-to-great Vikings roster.

Despite not finding success as a starter, Jackson carved out a role as a longtime back up QB in Seattle, Buffalo, and then Seattle again. He left the league in 2015. He won a Super Bowl as a back up in Super Bowl XLVIII, when the Seahawks destroyed the Broncos.

Jackson’s stats in the league were as follows (Courtesy of NFL.com):

Jackson had been the QB coach at Tennessee State in 2019, and the QB Coach (and other duties) at Alabama State in 2018.

Stay tuned to VikingsTerritory.com and purplePTSD.com as the story develops and share your favorite T-Jack memory below or in our new message board.