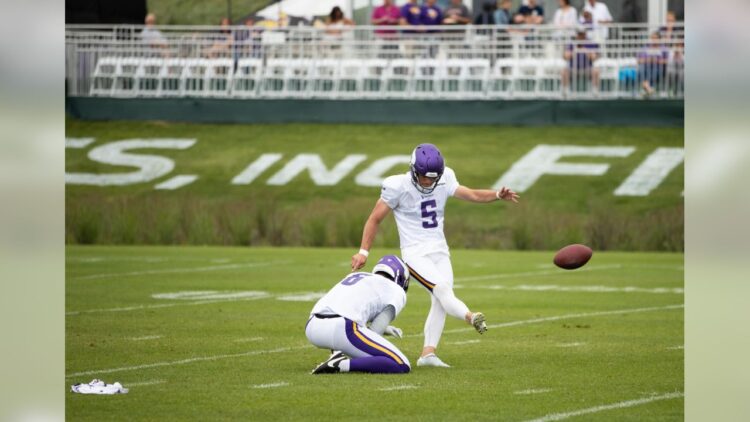 The Minnesota Vikings kicking sorrows are seared into the temporal lobes of anybody associated with the organization. From Gary Anderson, Blair Walsh, Daniel Carlson, Kaare Vedvik, to Dan Bailey, “it’s always something” with Vikings kickers over the last quarter-century.

Before Week 14 of the 2020 season, Minnesota’s current kicker, Dan Bailey, largely escaped wholesale criticism. His performance since joining the team in 2018 has been rather reliable. And, for Vikings loyalists, decent kicking is outstanding kicking. Sign a man on the dotted line that can drill reasonable kicks when the stakes are the highest – is a fair synopsis of the mentality. That’s why former Vikings kicker Kai Forbath is remembered with warm-fuzzies because he was dependable in gigantic spots during the 2017 NFC Divisional Playoff game.

The team had that comfort with Bailey – until the Buccaneers game. The former Cowboy-turned-Viking missed three field goals and an extra point in Tampa Bay while converting zero kicks on his docket – a feat the NFL has not experienced in almost 60 years. Time to panic.

After the game, Mike Zimmer was less hot-headed on the matter than his usual gristle might suggest. On Bailey, Zimmer stated:

“He kicked good during the week this week. So we’ll just have to make a decision and go with it. I like the kid a lot. Like I said before, I’ve had tons of confidence in him. He’s had a very good year. He’s had a couple bad weeks now. But you know, we can’t throw away 10 points and things like that. It’s not just Dan Bailey. We gave up a 50-yard throw because a couple guys weren’t in the right place. You can’t do that either. If you guys want me to fire guys for making a mistake here, a mistake there, then we wouldn’t have any players. Let’s not put this all on Dan Bailey.”

Those musings are not a sure-fire endorsement of Bailey’s dismissal. Instead, the stopgap solution to the Vikings here-we-go-again kicking malady is probably on the roster.

Zimmer’s empathy after the game is not the wording of a head coach seeking to terminate the services of a player. In fact, his phrasing was quite consolatory or borderline father-like. Zimmer and general manager Rick Spielman may still release Bailey, but the word choice from his postgame interview implies otherwise.

What’s more, the Vikings would eat north of $3 million in dead cap money if Bailey’s outright exodus is the strategic maneuver. For a team that extends its Super Bowl window year after year, navigating dead cap funds because of a kicker is not preferred. Contractually, Bailey is slated to be a part of the franchise through 2022.

Auditioning Bailey for Week 15 and praying for a resolution to his yips is likely the most predictable outcome for the short-term future. This plight becomes significantly easier if Bailey’s follies are chalked up to a one-game kerfuffle.

In October 2018, Green Bay Packers kicker Mason Crosby missed four fields and an extra point – in the same game – before drilling a redemptive field goal late in the contest. Bailey did not rectify his demons in this manner versus the Buccaneers, but the two situations show parallels. Kickers have awful games and recover. There is precedent for this – Crosby remains the Packers kicker to date.

Vizcaino, with a Bailey Leash

A 24-year-old kicker named Tristan Vizcaino lives on the Vikings practice squad. He joined the league in 2019 from the University of Washington. Vizcaino has never attempted a regular-season kick – of any kind. The former Husky spent minimal time with the Cincinnati Bengals and Dallas Cowboys organizations but nothing in a meaningful capacity. He did, though, convert a 57-yard field goal in a preseason game between the Bengals and Washington Football Team about 16 months ago. Some leg muscle exists.

The most sensible approach is to activate Vizcaino for Week 15. A new, hypothetical kicker would have to pass coronavirus protocols to hop on the roster, a process that is not necessarily expedient. This increases the chances of a Vizcaino sighting rather than the acquisition of a kicker like Stephen Hauschka or Adam Vinatieri – both reputable free agents.

At home against Chicago, Bailey could be given a last-supper opportunity to make amends. But if his first field goal or extra point attempt drifts wayward of the uprights, Vizcaino could fill in as an emergency replacement.

Competent NFL teams don’t cease kicking field goals or extra points when the kicker is mired in ineptitude, at least not for longer than a few quarters. A plan of action is needed. A Bailey-into-Vizcaino contingency is prudent.

Season is on the Line

Here’s the kick in the head: The Vikings cannot survive another game in which a kicker eviscerates all chances of winning. Minnesota must already win their final three games and ask the Arizona Cardinals to lose one of their remaining games. That’s the current pathway to wildcard round football. The margin for error is zilch.

The Chicago Bears enter U.S. Bank Stadium next Sunday off the momentum of a win. Mitchell Trubisky and his pals thrashed the Texans 36-7 in Week 14. They, too, are searching for a postseason pulse and will have every reason to clobber the Vikings.

One more abominable outing by a Vikings kicker will end the season – if it hasn’t already. Get familiar with the name Tristan Vizcaino. He is the most rational Plan B amid this pandemic NFL season.