So Long Sid, and Thanks 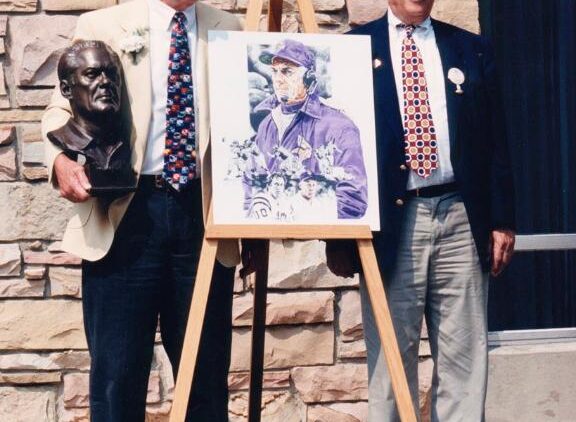 Legendary local reporter and columnist Sid Hartman passed away at the age of 100 years old on Sunday afternoon, some time during the Vikings’ debacle versus the Atlanta Falcons. In the Star Tribune newspaper that morning, his final column appeared, once again featuring his signature “ray of hope” style of opining with the following headline: “Thielen says the Vikes have the Talent to Bounce Back.”

Well, the Vikings didn’t bounce back on Sunday, and neither, I am sad to report, did the indomitable Sid—much the surprise of many despite his advanced years. In fact, for a moment on Sunday I wondered what it was that got him—surely not old age. It was truly a peculiar thought, but not when regarding Sid, whose energy, determination and drive to keep grinding at his work every day always belied his years.

By now you have read and heard many Sid stories in the paper, online or on the radio. There are countless out there about this truly unique person in the history of Minnesota sports and sports journalism throughout the country. But when you live to be 100 and work for 75 of those years, you meet a lot of people, and, in Sid’s case, are likely to make an impression on them.

So, please indulge us one more Sid story.

This may not be like a lot of the other stories you have heard; my time interacting with “The Great Man,” was not as long as others in the market. And seeing that I didn’t work at the Star Tribune (save for six months in the marketing department working on a sports photo book, the publishing of an opinion piece in the editorial page and six years delivering the newspaper as a kid), I wasn’t exactly afforded the same loyalty, generosity or interactions that his co-workers often received. Sid and I had a little history, however.

Sid was always my Dad’s go-to read when I was growing up in Mankato, so I knew about him and read him long before I ever met him (hadn’t we all?). Although “met him,” might be a little strong—encountered is more accurate. In 1994, I was the publications manager for the Minnesota Timberwolves, and I ran into Sid more than once in the media room. Everything you might have heard about his work ethic was true and on display most nights and he was always after the next scoop.

As the editor of the Wolves’ game publication, I had been assigned the opportunity to work with former Minneapolis Laker George Mikan, who later asked me to write his autobiography: “Unstoppable: The Story of George Mikan—The First NBA Superstar.” I took a short leave from the Wolves during the summer to research and write the book, interviewing countless NBA contemporaries of Mikan’s and those with the Lakers. As many folks now know, Sid was the defacto GM of the Lakers, instrumental in bringing the team to Minnesota, so I needed to interview him early (for background), as he was the man.

Unfortunately, Sid was as busy as ever, despite being in his mid-70s at the time. To his credit, Sid answered his phone when I called, but he put me off several times, suggesting that I interview everyone else I needed and get him last. It was not ideal, but my only shot.

As time was running out, I called and was rebuffed again, but in a very Sid-like move, I insisted on the interview. I had read and heard all the stories by then, but needed Sid on the record for some of them, as he personally securedMikan and ultimately the team (he famously drove around the cities “getting lost” when taking Mikan to his plane back to Chicago—which Mikan missed, stayed overnight and signed the next day with the Lakers). Sid answered my questions, but was strangely less than forthcoming—he had been known to talk about his Lakers days on the radio often. I really didn’t get much out of him, mostly confirmation of what I already knew.

Several months later when my book came out, I met Mikan in the media dining room at Target Center, as George had brought a handful of books for me. Sid walked up to us as we were talking and asked Mikan for a book, but he had already handed them to me—and I wasn’t in a giving mood. Sid said, “So, why does he get all these books?” And, knowing Sid didn’t know me from Adam and still a little disappointed in his contribution to the book, I snapped, “Because I wrote it!”

George pulled me aside later and asked me for a copy to give to Sid, which I did, only grumbled a little about it. It was a while later I surmised the reason Sid didn’t have a lot of inside info to give me. I remembered that his biography written by Patrick Reusse had come out a few months ahead of Mikan’s, and he was saving these stories for his own book. Recognizing that, it’s a bit surprising that he gave me anything at all. If I have learned anything about Sid in the past couple days since his passing, it is that he was extremely competitive, even with his co-workers and his own son, Chad.

I didn’t interact again with Sid until I became a Vikings beat writer for CBSSports.com in 2011 and ran into him often out at Winter Park and ultimately TCO. He was always out there—and it was incredible to witness. I recall one day talking with Pioneer Press writer Brian Murphy and we were watching Sid go from locker to locker for a little sound.

We watched the marvel in action further.

Sid outlasted me as a Vikings reporter, and that will never cease to amaze me. But everyone who was his contemporary in the job certainly has a story to tell.

So, I could poke fun and relate some anecdotes about thenonagenarian still killing it at WP, and sometimes killing the other reporters. Okay, a little: One time in a media scrum with Adrian Peterson, Sid asked the first eight questions in the interview (I checked on my tape), and when one bold writer from out of town dared to ask the next one, Sid, turned to the rest of the throng and said, “You guys think you own this thing.” I saw steam coming out of a fellow reporter’s ears.

Another time in a scrum with Jared Allen, Sid, by this time very hard of hearing, was standing right next to Allen and then asked the same question he had just answered. Allen turns to Sid and says, “Sid, I just answered that question. Are these things working?” he asked as he tapped on one of Sid’s hearing aids. “Oh, yeah, ya genius,” Sid responded.

But I’d rather recall the time he pulled me aside and asked me for help to change the batteries in his tape recorder—yes, that tape recorder. I had it in my hands and don’t know how it was still working. I can only think he asked me for technical support because he probably thought I was the vintage of someone who was familiar with such an ancientbeast and could handle the battery replacement.

Or relate the time I was leaving Winter Park and came upon Sid stuck in his handicap parking space out front of the building. He was turned exactly perpendicular between the curb and a van parked in the next spot, and to this day I have no idea how was able to get his car in that position—perhaps Austin Powers does.

We did some quick maneuvering with me coaching from the sidelines to extricate him, and he was on his way. I was heartened to hear that it wasn’t long after when he gave up driving for good.

In either instance, we never really exchanged pleasantries. I was glad to help him out, even though I’m not sure he remembered me from our “time together” at Target Center. It didn’t matter. I was in the presence of a giant in the field who needed a little help—as we all do from time to time, especially if were we to approach 100 years old.

I’ve heard and read a lot of others’ Sid stories the past fewdays, and while I long ago got over the fact that Sid didn’t give me his best in my interview that day, I see it in an even newer light today. At the time, Sid was already a legend in the business, and, on some small level, he considered mehis rival. There are lesser things to hang your hat on in this business.

Thanks, Sid. I am sure you are up there getting the scoop for the rest of us.