Smiles in Heaven: Good-bye to Our Friend Tom Hanneman 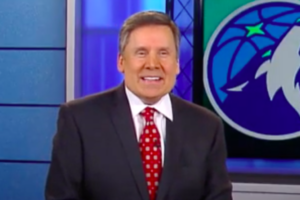 My friend Tom Hanneman passed away in his sleep last week. The longtime Twin Cities sportscaster (a career 50 years in the making) ended quietly and peacefully for him but tore a hole in the local sports community and in the lives of everyone who knew and interacted with him—which were many.

There has been an outpouring of grief and tribute for Tom (known affectionately to everyone as Hanny) since Dec. 17, and it was richly deserved. The common theme from most everyone who talked about him were that he was a true professional, hard-working and accomplished in his field and a downright decent and gracious human being. He was a friend to everyone whom he met, and the tears that flowed last week were a testament to that fact.

Let me gives some examples:

Hanny first came on the scene in the 1970s as a sports reporter for WCCO-TV, for which he covered everything from prep and college sports to all the local pro sports—including the Minnesota Vikings. He then moved on to the Minnesota Timberwolves where he spent more than two decades as radio analyst/sidekick to Kevin Harlen’s play-by-play and eventually taking the play-by-play job on television—and everything audio and visual in-between. He finally became studio host at FSN North broadcasts of Wolves, Twins and the Wild games. For a description of just how important Tom’s voice and commentary were to sports in this region, consider Jon Krawczynski’s piece for the Athletic.

But it is the private face and voice of Hanny that I will remember most. As my son, Seth, who works in the film industry in Chicago remarked recently, it is the necessary ability of every good on-camera performer/reporter to be able to put guests he’s speaking with or interviewing at ease in order to do their job well—and that was Hanny to a T. But with Tom, it wasn’t just a faux on-camera persona; his ease and legitimate care for everyone he encountered was an authentic and consistent character trait of his everyday life. For those who had the opportunity to meet him and, especially work with him, it was to encounter his decency and joy every day.

Tom was five years in at the Wolves when I started working there in 1994. I was bit older (with a young family) than many in the team’s front office, who were a tight-knit, young group who had already been in the trenches together, and some reminded me of being in a kind of a “Friends” mode of their lives: young, single and working an exciting career together. Like any new employee, it takes a bit for others to warm up to them, but I was hired a week before the team hosted All-Star Weekend and the place was jamming, so I retreated to my cubicle and got a little lost in the shuffle. I was replacing a beloved co-worker when I joined, so it took a little time to hit my stride socially—or so I thought.

That is, until Hanny came by my cube. He was in broadcasting and I was the publications manager, so our paths didn’t cross naturally very often, yet there he was, stopping by and introducing himself, as if I didn’t already know him from years of watching him on television. My initial thought was “why is he taking time out of his day to meet me?” The next time I saw him, it was merely an extension of the previous conversation, as though we were now not just co-workers but were seated across from each in other in the same long boat pulling oars in together. He improved my comfort level at Target Center quicker than anything else had in those early days.

But it was never a one-off with Tom. If you were his co-worker, he was going to do whatever he could to make the ship sail more smoothly for you. When I wrote a story for the game program on the broadcast team, Hanny gave me whatever time I needed. When I had a question about a player he already knew intimately, Tom easily lent his insider knowledge across “platforms,” which is not something every competitive journalist would do. And when we started a Kid’s Club from my department, and I had to create an in-game radio promo with my son, Tom was there to help again.

Seth and I ventured downstairs to the broadcast department (somewhere I had never been before or since) and Tom met us at the entry way, gave us a quick tour and quickly made me feel at home again. In an area where I sensed the broadcast technician was a bit wary of a grade-schooler invading his professional space, Hanny charmed my 8-year-old kid (who had to strap on the earphones and voice the promo), putting him at ease in the studio. Seth cut it in one take (much to everyone’s surprise) and it later was aired on game nights, where Hanny graciously introduced it.

From that point on, my son Seth became a frequent focal point in the back-and-forth of my and Tom’s banter. Tom always asked about him, but then was quick to remind me that he thinks Seth really would rather be a Packers fan than the Vikings fan I was raising him to be. In fact, Tom, a native of La Crosse, Wisc., constructed a xeroxed photoshopping of a shot of Brett Favre running across the field with helmet in hand after throwing a touchdown pass in Green Bay’s victorious Super Bowl in 1996. Only he photoshopped Seth’s face onto Favre’s body and surreptitiously placed it in my cube. In the world of sports and locker room vernacular, you know you are in the crew if they are giving you grief.

After I left the Wolves in 2000, I saw significantly less of Tom until I covered the Twins for The SportsXchange for a season in 2013 and sat right in front of him in the press box at Target Field. Hanny, picked up right where we left off—his dry wit was ever-present, and he went out of his way to introduce me around the press box to fellow scribes and ex-Twins alike. New to this place, as well, Tom invited me to join him for pre-game meals in the media dining room. After I moved on to another job, we would meet for an occasional lunch where we discussed future projects he had in mind as he neared retirement age.

We had a chance meeting at The Lion’s Tap restaurant when my wife and I stopped in on the way back home from Mankato. Tom was just finishing his dinner at the bar, but stayed on to chat with us, spending the entirety of our dinner entertaining my wife, whom he had just met, with stories of his family and old workmates. Who does that in this fast-paced, “got-to-be-somewhere” world we live in?

This past year, members from the old Timberwolves crew started a weekly zoom call during the pandemic, and when I joined on, I was a little apprehensive, again, now being 20 years gone from Target Center (my wife said she could hear it in my voice). But this group was welcoming and warm, and I soon fell in with the retellings of all the old stories. One week I tuned in to see Hanny, who appeared just as surprised and happy at seeing me as I was him.

Tom was like an esteemed Wolves alum emeritus on the call, with his comforting mellifluous tone, easy laugh and slightly devilish grin. He moved quickly between telling old tales to riffing on his unique humor of puns and voices. He was the centerpiece of the call.

He talked about his sextuple heart bypass surgery of a year-and-a-half ago yet looked every bit as good as any other time I saw him. He, of course, stayed on after the zoom call ended to find out how I was doing. That was Hanny.

The last time I saw him on the call was right after the public announcement he would be receiving Upper Midwest Emmys Silver Circle Honors. He humbly talked about what it meant to him, and we all were excited for him to be receiving it. We are now heartened to know he received the honors in person, albeit from a distance due to the pandemic, before his passing.

The evening after Tom’s passing, we held a special zoom call, and it was the most widely-attended of any I had been on. The stories were told, and the tears flowed, and subsequent emails showed how much he meant to us and featured a familiar refrain of amazement at how many people Tom touched in his life.

If this tribute to Tom Hanneman comes off as a piece about my connection to him in some misdirected attempt at self-aggrandizement, I’d like to assure my readers it is not intentional. It is just to demonstrate how everyone who met Tom and had a relationship with Hanny was treated by him. We recently lost another sports icon in Sid Hartman, and his list of colleagues and “close personal friends” is very long after 100 years on earth—and while I also worked alongside Sid, I never entered the CPF sphere. But with Hanny, I am so happy and feel very fortunate to know that we were friends.

My thoughts and prayers go out to Tom’s wife Nancy and their children and grandchildren. I can only imagine their heartbreak—particularly at this time of year. I hope it fills their hearts to hear from others (many they have likely never met) what a great man their husband, father and grandfather was. I am sure he is looking down from heaven, with an arm around Peter at the gate (who he already knows well) and is smiling that great smile in pride and love for you all.