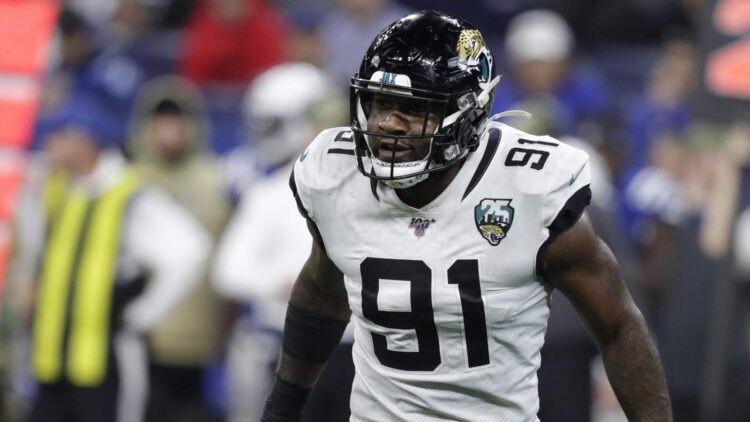 FILE – This Sunday, Nov. 17, 2019 file photo shows Jacksonville Jaguars defensive end Yannick Ngakoue (91) during the first half of an NFL football game against the Indianapolis Colts in Indianapolis. The Jaguars have agreed to send Ngakoue to the Minnesota Vikings for a second-round draft pick in 2021 and a conditional fifth-rounder in 2022, a person familiar with the trade said Sunday, Aug. 30, 2020. (AP Photo/Michael Conroy) (Copyright 2019 The Associated Press. All rights reserved.)

Sure, things are dark in Minnesota Vikingsland, but just because the remainder of the season is mostly meaningless doesn’t mean that we all can’t look forward to the most meaningless game of all: The Pro Bowl.

This season will be especially meaningless as the league will hold a “virtual Pro Bowl”, with players competing via Madden.

For players though, this is a big deal as many have bonuses in their contracts for making the Pro Bowl, or being All Pro. Additionally, as the Vikings are finding out this season, Pro Bowl selections can impact the final outcome of a trade (ie the Yannick Ngakoue trade).

As I’m sure some of you recall, a Jacksonville version of me (which would just be me with MORE pet reptiles?) started a campaign for Packers/Saints fans to vote Ngakoue into the Pro Bowl so his team would have a higher draft pick (as the trade stipulated that if Ngakoue was a Pro Bowler the Vikings would have to send the Jags a 2022 4th-round pick (instead of a 5th)).

I attempted, and failed, to create a counter-campaign, as you’ll see here:

Okay. I’ll do it myself. How we can offset Ravens fans’ Pro Bowl Scheme w/ #SKOLbowl

Sigh. It’s like my campaign to win Prom King all over again. Since when do you need a date to the Prom to be Prom king? Also, since when can’t a 36 year old go to the Prom? Governor Walz is drunk with power!

Anyway. The other talker here is that two Vikings made the Pro Bowl, which may be the total amount as people won’t need to drop out because it’s basically just a Madden Let’s Play.

Dalvin Cook and rookie Justin Jefferson were both voted in for the first time, which is astounding because former Vikings receiver Stefon Diggs never made it to the Pro Bowl during his time here (although he was voted in this year). Adam Thielen has been voted in previously, though.

Jefferson has 1,182 yards on the season, which means if he continues his per game average of 84.5 yards, he’ll come up about 124 yards short. You would think, though, that that per game average would be brought down by the first two games in which Jefferson was behind Bisi “Wide Receivers Can’t Jump’’” Johnson on the depth chart.

Over the last 5 games, Jefferson averages exactly 84 yards a game, as well. Talk about consistency. In December, though, Jefferson is averaging 132 yards a game, which would bring Jefferson to 27 yards within the record.

Keep in mind that the AFL had a 14-game schedule at the time, so, people will probably poo-poo it either way. And by people I mean Packers fan, and that Jacksonville Joe and his conversion van full of invasive snakes.