NFL.com says Vikings poised to “Really go on a run…” 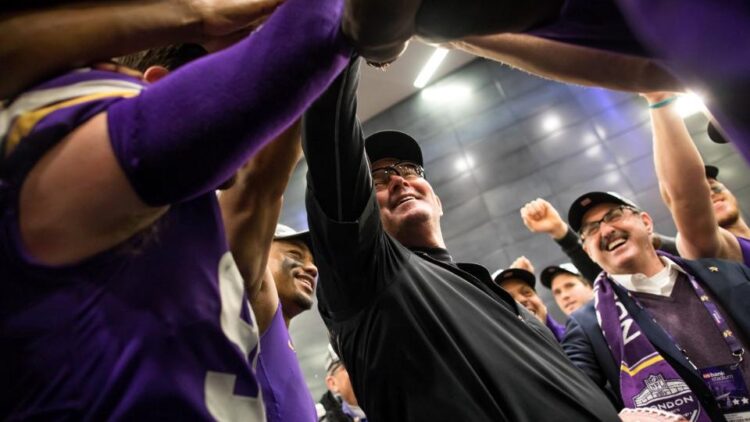 NFL.com says Vikings poised to “Really go on a run…”

Not that I’m complaining, but it can be hard sometimes as someone who covers the Minnesota Vikings for a living, to get a good sense as to where the team is in the eyes/minds of those who aren’t knee deep in the purple bubble we surround ourselves in online on a daily basis.

It’s because of that that I’ve always made it a point to read opposing team media in a build up to, or aftermath of, a game and to also read as much national (and sports betting) content as possible.

While the former has an inherent bias, just for another team, the latter tends to deal a bit more in objectivity (even if you’re risking a ton of ignorance from national talking heads who, in their defense, can’t get as deep with each team as we do (which is why you should always check out our site(s) first? Or last? I can’t tell if this is an argument supporting our business model or detracting from it).

One of the main reasons I started purplePTSD.com in 2015 was… Full disclosure, I’d been run out of the Vikings sub-Reddit on Reddit (obviously), which, if you were around the sub in 2015 you’ll know the worst thing anyone could do on that sub was to refer to Teddy Bridgewater as anything but the second coming of the Messiah. I did that, and also made the strange claim that Trae Waynes could, literally, TURN.

That’s an entirely different story, but, the other reason that I wanted to start a real local and independent Vikings news network was because I, like I’m sure the rest of you, was tired of waiting an hour for ESPN or NFL Network to cover a Vikings win only for them to get the dreaded highlight before the commercial break 30-second, zero analysis, spot.

But that doesn’t mean that there isn’t value in the national media and their Vikings takes, especially when they’re saying things like the following…

NFL.com’s Jeffri Chadiha said the following about the Vikings today…

“It’s becoming quite apparent that Minnesota, the same team that was 1-5 at one point, is about to really go on a run. “

When it comes to any detractors who have written off because the Bears are falling apart:

“It’s easy to come away from Minnesota’s 19-13 victory in Chicago with the sense that the Bears are in free-fall. Our natural urge is to always stare at the wreck on the side of the road. The people who so often do that tend to ignore everything else that is happening around them.”

“This was a last-place team just a few weeks ago. Now it’s a squad hitting its stride at an incredibly opportunistic moment.”

Ugh. This is so good it has to be fattening.

I’ll toss a cherry on this frothy sundae…

“The NFC has been such a roller-coaster ride that it’s fitting to see the Minnesota Vikings re-emerging as legitimate playoff contenders.”

He isn’t wrong. I’ve aged like a Nazi who stared at the Ark of the Covenant this season and have said multiple times on the couple radio spots I do each week that everytime I think that I’m emotionally done with this iteration of the Vikings, they draw me back in.

But that’s actually a good thing as most of us did write this team off after the Falcons game and especially after they traded Yannick Ngakoue for less than they gave up for him. So, the fact that we’re talking about ANY of this is a story in and of itself and also worth mentioning.

Point being, it’s been a WILD ride and it feels like something that’s just the beginning for this scrappy Vikings team, not just because someone in the national media says so, but considering the fact that this is the sort of coverage these Vikings are now getting?

I think we’re moving into the next phase of the Vikings hope landscape which starts with elation and eventually turns into abject fear. The fear of the other shoe dropping.

So let’s try to enjoy this roller-coaster ride because the truth is that this Vikings team is only at the beginning of a second championship window being open both this season and especially over the next couple seasons when they filter through more salary cap pain (ignoring the potential for a COVID cap nightmare that the league could easily avoid by just not punishing the teams and players who are risking their health to make the league and its owners more billions) and add experience and talent at more positions on this defense.