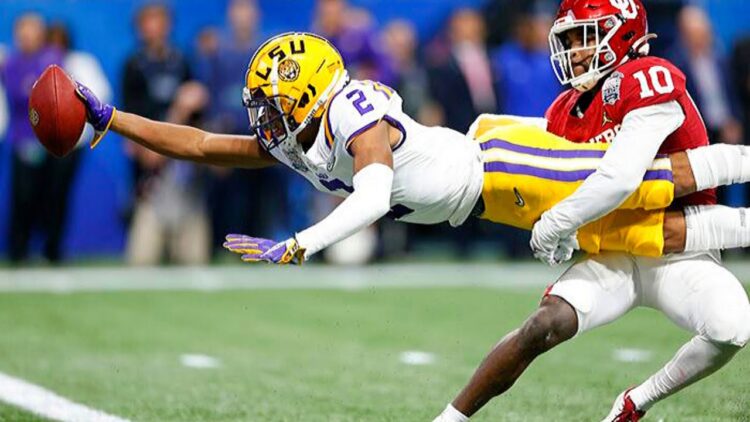 Note: We have launched our one-of-a-kind Vikings fan community/social media tools for the 2020 off-season and beyond! Click HERE to learn about our combination of live chat/message board/forums/user groups/our own internal Twitter-like software (with hashtags, video/instagram integration, etc.) and revolutionize how you talk about your favorite team!

The NFL Draft is now in the rearview mirror and the Vikings selected a wide receiver with their overall pick (a pick in the early 20’s). That receiver put up some amazing numbers in college and is thought by some to be on the precipice of an amazing NFL career. That receiver is Randy Moss, who the Vikings selected with the 21st overall pick in the 1998 NFL Draft. While there was “only” one receiver taken before Moss in that draft (in Kevin Dyson to the Tennessee Oilers (before they changed their name to the Titans), Moss came out of that draft ready to make the league, and especially the Dallas Cowboys, pay for not selecting him in the first round. 22 years later, the Vikings selected a wide receiver with the 22nd pick, who has also come out to say that it’s his goal to make the teams that didn’t draft him pay.

That receiver is Justin Jefferson.

Jefferson may have a bigger gripe than Moss did, although Moss’s talent was so other-worldly that it’s obvious that if the 1998 Draft were redone today, Moss would’ve moved from 22 to 2 (supplanting Ryan Leaf and being behind only Peyton Manning in the ’98 Draft). Obviously we don’t know how Jefferson’s career will go, but what we do know is that despite having the third-best stats in the NCAA with 1,540 yards and 18 touchdowns (behind teammate Ja’Marr Chase’s 1,780 yards and 20 touchdowns and Arkansas State’s Omar Bayless’ 1,653 yards and 17 touchdowns, that Jefferson was the fifth receiver taken in 2020.

Jefferson didn’t have the final year in college that Moss did (1,820 yards and 26 touchdowns in 1997 for Marshall), either, but Moss had a series of widely publicized “character” issues and incidents in high school, that lead him to go from potentially playing for Florida State and Notre Dame, to playing for the MAC school he helped put on the map, Marshall.

Jefferson hasn’t had those issues, so you’d think that his proficiency would’ve made him a top pick in the draft. You don’t need to go any further than Vikings Twitter/Reddit/Discord/Our message board/other articles to see how psyched Vikings fans are about landing Jefferson. Even Vikings general manager Rick Spielman said that the team attempted to trade up to the 14th overall pick to… Draft Jefferson.

Speaking on whatever the Zach Gelb Show is, Jefferson said:

“I felt like I was the best receiver in this draft class, and being the fifth receiver off the board, it kind of was a shocker. But also having that on my shoulder going into this next season with Minnesota, I’m definitely excited to show the world what I have.”

But that’s not what made news all over the interwebs. It’s what Jefferson said next:

Now, I’m sure he meant every single team as opposed to the actual person (or people) that didn’t draft him as that sounds a bit like he’s going to run his route straight up to the Raiders/Broncos/Cowboys/Eagles owners boxes and uppercut each respective GM. He continued:

“I’m going to show them that I am the better receiver than the pick that they had. . . . I’m definitely excited to go into Minnesota and [compete] for [a] Super Bowl.”

And… He stuck the landing by bringing things back to a generic football answer about being excited to go from Lousiana to Minnesota (which is basically Canada as far as most Lousiana…ns (?) are concerned). But, you have to appreciate that he is being this honest, or at least that he is being this partially honest. You also have to appreciate the chip that he now has on his shoulder as acclimating to the NFL as a wide receiver is one of the bigger asks in all of sports and any additional motivation, even if he’s for some sort of on the field revenge, might give Jefferson an additional edge.

Both our draft expert and managing editor for our sister-site, purplePTSD.com, DeShawn Vaughn and I thought that the Jefferson pick was a reach at 22. 2020 had been called the deepest wide receiver draft in history, and the fact that Jefferson ran 865 of his 870 routes from the slot in 2019 (according to PFF, which is 99.4%), vs. running 553 of his nearly 700 from the outside his sophomore season). Now, Jefferson did lead the LSU Tigers statistically in 2018 (54 catches for 875 yards and six touchdowns) while primarily playing on the outside, but because it was felt that teammates Terrace Marshall and mainly Ja’Marr Chase are better deep threats.

Obviously those moves worked, as Jefferson and Chase combined for over 3,200 yards receiving (and nearly 40 receiving touchdowns). That screams a huge change in offensive philosophy, which can be credited to passing game coordinator Joe Brady, who was rewarded with a gig in the NFL as the new offensive coordinator for the Carolina Panthers.

The question, then is, as Jefferson discusses during his pre-2019 interview about being moved to the inside whether or not he’ll be able to move back to the outside for the Vikings and avoid being a one-dimensional player that hurts Vikings slot master Adam Thielen from doing what he does best (as discussed here).
That may be a big ask, though, as Jefferson alludes:

“I guess it does, You know, I like having those inside routes, having those quick, you know, medium routes. We have deep balls at inside too, but it’s just, you know, that 1-on-1 matchup outside, it’s just that killer.”

The good news is that Jefferson runs great routes, something that the receiver he’s replacing in Stefon Diggs did at an elite level. Both Jefferson and Diggs ran similar 40-yard dash times at their respective combines (Jefferson was a tad faster, with a 4.43 vs. Diggs’ 4.45). What it really comes down to, is whether or not that “killer” outside matchup with a corner vs. the safeties he discusses going against as a slot receiver, is something he can handle.

“Inside, just having to you know, look at the different defensive schemes, having to have you know, a safety and a nickel on you and instead of just a cornerback so I mean, it’s different in its ways, but it’s pretty much the same.”

That is a big ask, though, as many a college receiver that has primarily run out of the slot (and thus run free off the line) has found it incredibly difficult to acclimate to the “grown man” game that is the NFL. While Jefferson has said that moving inside has allowed him to learn both the outside and the inside (which makes him a more complete receiver), lining up in the slot 99.4% of the time means that Jefferson will have to work very hard to re-acclimate to the outside and also overcome the “killer” aspect of the 1-on-1 coverage inherent there.

If he can he just might make the teams that passed on him pay. If not, the Vikings and their general manager Rick Spielman may have yet again overpaid for a receiver in the first round. Luckily for the Vikings, the fact that Jefferson wants to show the teams that passed on him how wrong they were implies that he is ready to do whatever it takes to make that happen. As someone who is clearly not sold on this pick, I consider this to be GREAT news and something that makes me feel a lot better about this pick (although, most of what I do is to prove people wrong for picking me last for kickball in middle school, so, maybe I just like the validation).