Kirk Cousins is officially now better than Aaron Rodgers, at least according to CBS Sports…

You know you’re knee-deep in the dry, dry patch of land that is the post Draft pre-Rookie mini-camp part of the off-season when you’re writing an article about someone else’s subjective list. But, hey, it’s something! With that in mind… CBS Sports released its list of the top 10 quarterbacks in the NFL for the 2020 season, and there are a few things to point out that might be of interest to us Vikings fans as there was one NFC North quarterback to make the cut and I’ll give you a clue… It wasn’t Aaron Rodgers or Kirk Cousins. But they are both mentioned in the piece, and the results may surprise/infuriate you depending on whether or not the state you reside in glorifies a dairy product.

Sidenote: It just occurred to me how strange that is. Sure, you had the Houston Oilers, or arguably the San Francisco 49ers (who focus on the gold rush of 1849), but imagine if we named the Vikings the Minnesota Fighting Lutefisk? Actually, that has a ring to it. MERCH STORE ALERT! 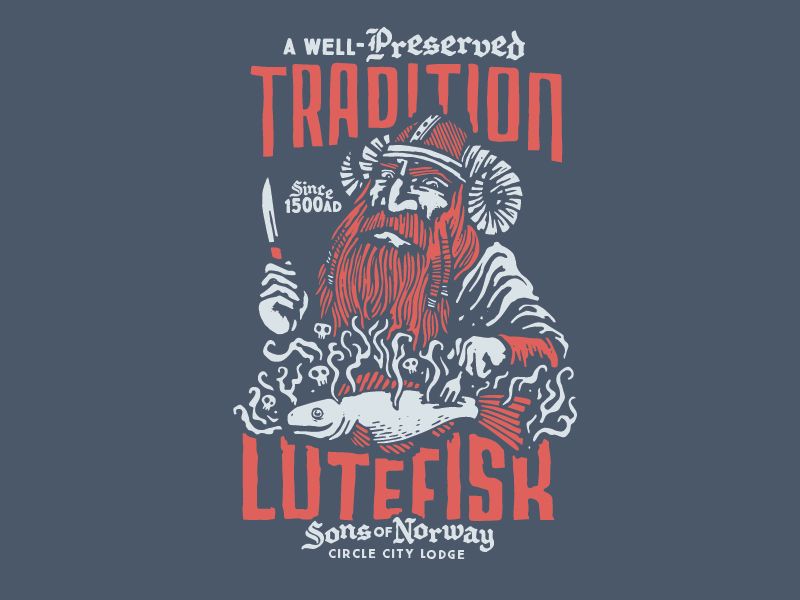 You can actually buy this shirt or hire it’s graphic designer here: https://dribbble.com/shots/2320714-Lutefisk-Final

That’s right, not only did Jordan Love’s trainer not end up on CBS Sports’ Top 10 list, but they also went so far as to say “No longer is Aaron Rodgers the most physically gifted quarterback in the NFL.”

tfw you fail to capitalize on an opportunity to make 🔥🔥🔥🔥🔥 memes about a sports GIF https://t.co/OC1PzyjpVb pic.twitter.com/bdxPgW639U

Then again, that’s not that huge of a surprise as that is how both time and the consequences of it work.

Despite the Hype, the Vikings have Nothing to Fear in Aaron Rodgers/The Packers

Those articles got a great response. From Packers fans.

That means they were in the denial portion of the grieving process nearly 10 months ago which means by now they’re probably onto bargaining? Offering Jesus wedges of cheese for a new set of collarbones for they’re favorite Packer?

The other former top 10 QB that is no longer considered elite is Matt Ryan, only a few seasons removed from his MVP campaign in 2016. That’s not entirely surprising, though. Beyond the Rodgers omission, the only other NFC North/Vikings related tidbit is that Matthew Stafford is, of course, on the list and that… I shit you not… They say that Kirk Cousins is BETTER than Rodgers!

The author of this amazing piece of Pulitzer level content, Sean Wagner-McGough (who has the last name of a funeral home) says, of his Rodgers decision (which he defended HARD because he’s clearly also heard from the unwashed masses in our border sharing, one industry having sister-state Wisconsin. Of Rodgers, he said while discussing the former Top-10 QB’s he didn’t include:

“I’m talking mostly about Aaron Rodgers, an all-time great quarterback who I would — if I had the ability to do so — vote into Canton during his first year of eligibility. I’ve long said that Rodgers is the most talented quarterback I’ve ever seen play with my own two eyes, which remained true right up until the moment Mahomes took over for Alex Smith in Kansas City.”

What an age to be a football fan!

He’s not wrong and I’m not going to pretend that Rodgers wasn’t amazing at his peak, the point is that he is no longer at that peak and while Rodgers at even 75% capacity is still better than most quarterbacks in the league, it’s worth noting as we obviously face the Packers each year and had we beat them (instead of tying them) in recent seasons we could’ve made the playoffs (and lost in the first-round! Yay 2018!).

“Rodgers is one of the greatest quarterbacks I’ll ever get to watch. But I left him off the list because, as stated above, we’re looking ahead to the 2020 season and, well, Rodgers has already started his decline.”

“In 2019, Rodgers threw for 4,002 yards, 26 touchdowns, and only four interceptions, but he averaged only 7.0 yards per attempt, and ranked 13th in DVOA, which measures value per play, and 20th in total QBR. The truth of the matter is, Rodgers hasn’t been operating at his peak for a few seasons now. We haven’t seen him at his best since 2016.”

Now, this article isn’t solely about celebrating the decline of the Vikings’ biggest foe of the past decade-plus or patting myself on the back. No. It also is about the opinion of someone who covers the NFL from outside of the Vikings/Packers/NFC North bubble that we all reside within.

Wagner-McGough/or as his friends call him (I’m guessing) Waggy-McGooGoo said of the Packers’ off-season:

“Add in the Packers’ dreadful offseason, when they refused to give him the reinforcements he needs, and well, that’s how you wind up with a top-10 quarterback list without Rodgers. I still think he’s a good quarterback, just not the great quarterback he once was.”

Oh yeah, the part that I’m sure will cause a BIT of controversy in the above-mentioned internet bubbles. The Cousins is > Rodgers bit.

“Other quarterbacks, besides Rodgers, who just missed the cut include: Kirk Cousins (arguably the second-best quarterback in the NFC North)…”

Arguably. The second-best quarterback in the NFC North.

Now, I could link to all of the articles I wrote defending Cousins last season (and in 2018), but I think you’ve had enough of my grandstanding especially considering most of you have zero idea who I am… Unless, again, you’re from Wisconsin and someone is reading this to you.

That’s an interesting angle, as one has to wonder whether or not the Vikings (or their fans) would trade Cousins for Rodgers straight up (or would’ve had Rodgers than Cousins in 2018). Rodgers does have experience playing behind bad offensive lines, with many of his peak years coming while his line was ranked in the early-to-mid 20s.

However, considering the fact that he treated the objectively routine tackle by Anthony Barr like he was Stone Cold Stunner’d onto a bed of nails by a centaur who just got done burning the flag, and you’ll see both why he wouldn’t probably have fit in well in the locker room and also why his decline started in his early-ish to mid-30s when other QBs like Tom Brady and Drew Brees were dropping dime after dime at that age.

That’s due to the fact that he has a recent common ancestor with most songbirds. As in, he has hollow bones. That’s why his one main sponsor is an insurance agency and why his former go-to touchdown (or big play) move didn’t require him to lift his arms.

If you think I’m making this up, this photo of a medicated Rodgers from shortly after his injury on Conan O’Brien’s criminally underrated show, in which Rodgers clearly only did to push the narrative that he was injured thanks to a dirty hit, should explain things. 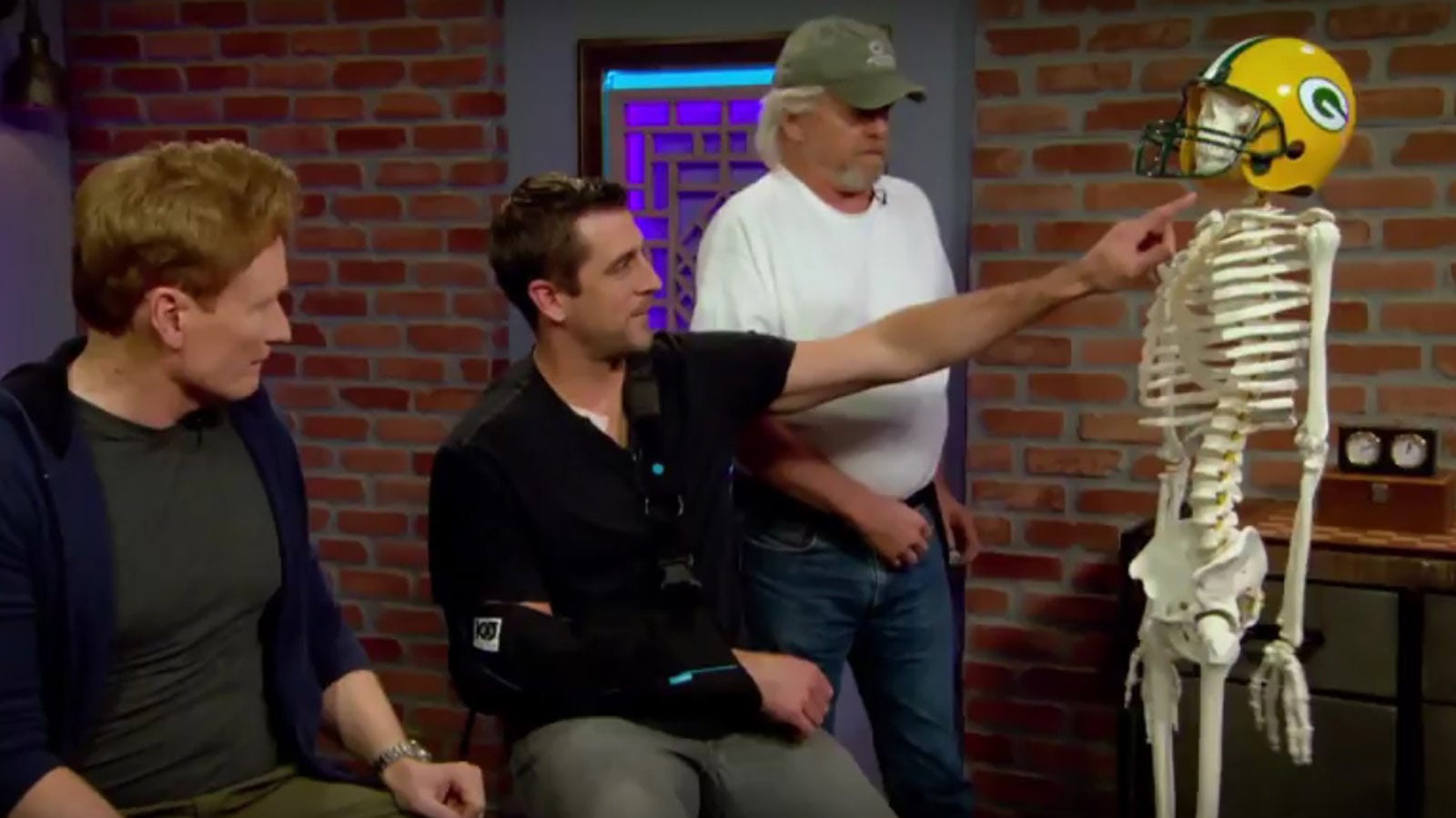 “So this is where the soul usually is?”

If you’re interested in what Wagner-McGough had to say about Stafford, click HERE! Despite my jokes above, it’s a great article and dude is a great writer.