Jason of OTC: Vikings “would be crazy” to pay Dalvin Cook more than $10M/year 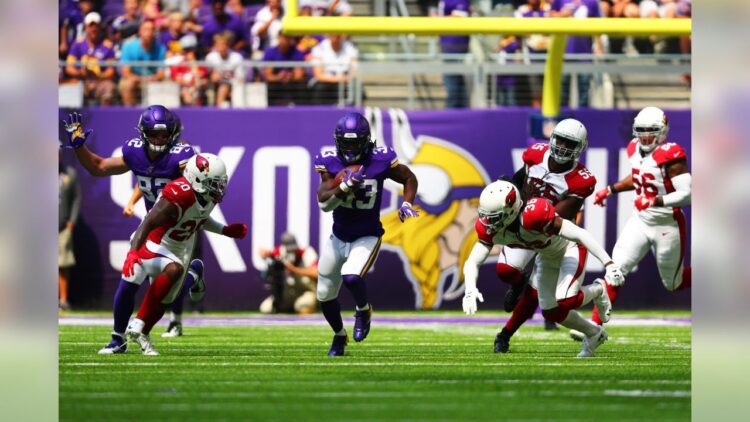 It’s no secret, Dalvin Cook will not be participating in team activities until he receives an extension. We’ve seen the rumored numbers that the Cook camp appears to be targeting in a potential deal. However, Jason Fitzgerald of OverTheCap.com believes the Vikings should spend wisely, especially when it comes to a player at Cook’s position.

Fitzgerald shared his thoughts on the most recent OTC podcast:

“I think if you look at what [Cook] has been with the injuries and where he was last year with the use and everything else, he would fall into the David Johnson category, right around $13-14 million per year. I know the rumor is $16 million, but I would guess that’s probably what their goal is, 13 or 14.”

To get a sense of the current value for NFL running backs, Fitzgerald looked at a number of UFA’s who have recently received contracts on the open market.

While it would take a drastic sequence of events for Cook to hit unrestricted free agency any time soon, the salary cap expert also made it very clear that Cook should not be expecting to receive top-tier running back money.

“Minnesota I’m sure was hopeful that Christian McCaffrey would have not gotten the deal he got ($16 million/year). Dalvin Cook does not compare with him,” said Fitzgerald.

When discussing if he thinks Cook could potentially hold out deep into the regular season, Fitzgerald said he doubts that will happen.

“I think he would be incredibly foolish – he’d get really bad advice if he held out. Especially given the way that Minnesota has been with most of their players. I don’t see the logic in necessarily doing that.”

The Vikings have been aggressive in extending their core players a year before their contracts run out. This time, with a running back, it appears they may have the leg up in negotiations.

“Cook has absolutely no leverage to hold out,” said Fitzgerald. “The only leverage that I could see Cook having here at all is if Minnesota still believes that they are a deep playoff contender – I kind of think they’re in a re-tooling phase — and they know they’re going to rely on him a lot this year. Run somebody into the ground if you want to say it that way. But realistically, how much of an impact is he going to have? I know he had a great season last year, but again, I look at them at re-tooling. Maybe they’ll be a playoff team – I think they’re going to be a fringe playoff team… But do you want to get long-term tied into a running back? How many running backs have you got tied into long-term that look like they’ve worked out? None.”

So what will a Vikings’ offer to Cook look like?

Fitzgerald said there’s likely a happy medium in which the Vikings and Cook can agree upon. In terms of dollars, it just may not be in the ballpark that Cook’s camp is seeking.

“I think they’ll make him a legitimate offer… But you just can’t sink that kind of money into that position. You just can’t… $10 million a year? Probably somewhere in that level. But that’s also the same price as the franchise tag, so you could just kind of go with the franchise route if you’re Minnesota. Minnesota has generally been proactive with their deals, so you would think they want to keep a happy locker room and everything else. So I think [Rick Spielman] would make an offer that’s probably around $10 million a season, but they’d be crazy to go above that. They’d be insane. It just wouldn’t make any sense at all. I don’t think [Cook] has any legs to stand on here. I don’t think it should turn nasty, I think that people just have to be realistic with this.”

Are there any other options for Cook?

Fitzgerald said Cook should also look at the other options.

“If [the Vikings] say no, and they don’t even franchise-tag you, what are the other options? If you do not report to training camp when training camp opens, you lose an accrued season. So if you’re on a 4-year deal, that means you are now a part of the RFA process.”

The move would not help Cook receive the payday he’s searching for.

“If Dalvin Cook was to actually hold out, because he’s a second-round draft pick, he would basically only be eligible at that point to earn a salary next year of probably around $2.2 million… At the lowest RFA tender, because no one is going to give up a second-round pick for a running back.”