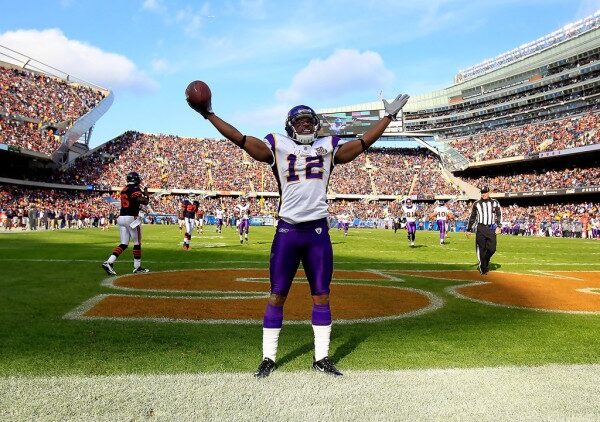 Even before the Vikings courted legendary offensive mind Gary Kubiak out of retirement the powers that be in Eagan loved them some Swiss Army Knife wide receivers. While Kubiak has been called one who loves players who can do more than one thing, it is Vikings general manager Rick Spielman who drafted the multi-faceted Percy Harvin out of Florida in 2009 and replaced him with the completely wasted Cordarrelle Patterson in 2013.

Both could line up anywhere on the field, including at the running back position. While Patterson was irritatingly limited in the run game by then offensive coordinator Norv Turner, despite posting averages of 13.2 and 11.7 yards-per-carry his first two seasons in the league, Harvin was much more of a staple in the run game. That is partially why the Vikings received a bounty from the Seahawks when they traded for Harvin.

Enter Vikings rookie Justin Jefferson, who like Harvin and Patterson (as well as recent bust Laquon Treadwell) is another first-round pick spent by the Vikings on a receiver out of the SEC. when you throw in Sidney Rice, a second-rounder, and even Troy Williamson, every wide receiver taken in the first or second round by the Vikings since they traded Randy Moss has been from the SEC.

While none of those receivers have stayed on the team beyond their rookie contracts, the ones that weren’t outright busts had one thing in common. Their ability to line up nearly anywhere on the offense. Jefferson, like Harvin and Patterson, is seemingly following suit.

NFL Network’s Tom Pelissero, who spoke about Jefferson and how the Vikings have been using him in camp (as well as their plans for 2020 and beyond for the LSU superstar).

“Let’s start with Justin Jefferson, their top draft pick,” Pelissero said. “One thing they really liked about him was his intelligence. They are not holding anything back with him. I am told they are cross training him at every position. They envision him as a versatile piece who can move around the offense.”

While that doesn’t necessarily mean that Jefferson will be a huge contributor in the run game, it does go against the notion that Jefferson will be a one-trick pony in the NFL a la Treadwell. When you throw in the other glowing reports from coaches and other players about Jefferson’s route running and general football acumen, it is starting to feel as if the sky is the limit for Jefferson and the Vikings. While Harvin, especially, was incredibly talented he was never a fully rounded receiver like Jefferson has shown he can be.

Yeah, Jefferson ran over 99.5% of his snaps out of the slot during his final year at LSU, after being moved to the interior after lining up on the outside in 2018. While his stats exploded in the slot, Jefferson’s percentage of offense in 2018 was actually higher while playing on the outside.

With Adam Thielen, Bisi Johnson and potentially Tajae Sharpe lining up on the outside, Jefferson could become the Swiss Army knife this Vikings offense has both implemented in the past and will definitely need in 2020. So look at his cross training and the Harvin comparison as the floor for his career, with the ceiling being what the Vikings always hoped Percy or Cordarrelle could be.

With deep threat Stefon Diggs temporarily in Buffalo before he ends up on a one-year prove it deal with most likely the Raiders, the Vikings offense will need all the help it can get to move the ball down the field, so this is all very good news.

With similar questions on the interior of the offensive line, as well, having a Percy-ian weapon on the Vikings offense that can line up all over and help a quarterback that is under duress, could be worth it’s weight in (purple and) gold this season.

With Kubiak calling the plays this season, as well, there is a lot to get excited about here. Considering my lukewarm feelings about the Jefferson pick and the potential of the Vikings offense in 2020 (mainly due to the lack of investment in the offensive line), that means something.

With Cousins, aka the NFL’s second-most accurate passer, Thielen, Kyle Rudolph and second-year phenom Irv Smith jr. helming the tight end spots, along with one of the league’s best backs in Dalvin Cook, the Vikings offense already feels like a Swiss Army knife or pick your poison situation for most defensive coordinators.

Adding Jet to the mix, assuming he has even 50% of the impact he had at LSU in 2019, feels like an embarrassment of riches for the purple. If the Vikings are confident enough to already be cross training the rookie, that means his knowledge of the offense (as LSU ran a similar scheme) and output thus far are proving that Jefferson won’t end up as “just” a slot guy in 2020.

If that’s the case I’ll be MORE than happy to eat every crow in the state. From the news already coming out of camp, I should probably get my bib ready.