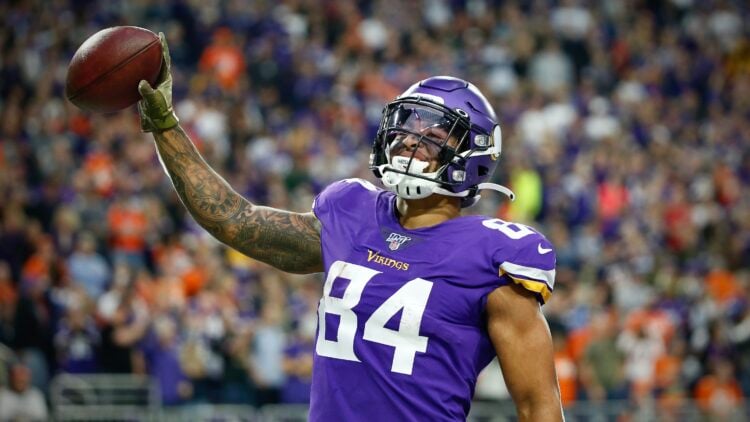 Despite that, neither Smith jr. nor the Vikings are resting on those numbers, as both envision a much larger role for him in 2020. With deep threat Stefon Diggs gone and Smith jr, who turned 21 during last year’s training camp, will be one of the elder statesman on this suddenly super young offense and Vikings team.

With everyone locally and nationally pointing to 2020 as a breakout year for Smith, the question becomes what will that look like? Luckily for the Vikings, it looks like Smith could become the best deep ball receiver the Vikings have.

As numerous sources pointed out earlier this off-season, Smith was running “Wide Receiver caliber routes” while training back in June. Beyond that, despite his stellar run and pass blocking talent in college and as a rookie (grading out as the 13th-best tight end in the league in that regard in 2019), Smith ran a faster 40-yard dash at the combine than 85% of tight ends in that same draft class.

When you marry that to who he now plays under, and with, it isn’t hard to see why many fantasy sites, like gamedayr.com/ are picking Smith as a dark horse breakout candidate for 2020.

Gary Kubiak is well known for his two tight end sets, and while only one team ran more two tight end formations (either 12 or 22 formation(s)) than the Vikings in 2019 (Philadelphia), that hasn’t always meant that there are two tight ends actually catching a ton of balls during Kubiak’s tenure in the league. That is, until 2019.

Just because it hasn’t meant that there are two tight ends catching copious amounts of balls, having two tight ends on the field creates a situation in which the offense dictates the flow of the game, per Vikings veteran tight end Kyle Rudolph.

“It forces defenses to play with three linebackers, and that allows us to control the game.”

When the Vikings had arguably the best 1-2 punch at receiver with Adam Thielen and the recently traded Stefon Diggs, that mismatch was obviously fantastic. With the youth the Vikings have on offense as well, it’ll help Justin Jefferson acclimate as he ran almost solely out of the slot in 2019 and could struggle with press coverage on the outside.

“When we go out there in three-wide sets and people talk about creating mismatches, well, now they have five DBs on the field. There are still mismatches, size mismatches, but you can kind of control and do things how we want to do them.”

That is why it is not surprising that 28 of Minnesota’s 45 offensive touchdowns were scored when there were two tight ends on the field, according to Vikings.com writer and VikingsTerritory.com alum Lindsey Young.

When I analyzed Kubiak’s career as either an offensive coordinator or head coach, I focused on the idea that having two elite receivers was redundant in an offense that ran two tight end sets.

The best comparison to the 2019 Vikings under Kubiak was the 2015ish Denver Broncos, who had two elite receivers in Demaryius Thomas and Emmanuel Sanders.

During his final season in Denver either Thomas or Sanders caught the ball 70% of the time, which was higher than any other time in Kubiak’s history. The 2019 Vikings passed the ball to receivers 47% of the time, tight ends 28% of the time and running backs 24% of the time.

Expect that number to go up and for Smith to benefit. As Owen Daniels showed under Kubiak in Baltimore and Denver, Kubiak will feed the ball to a tight end who can block more than catch than one who can catch more than block. So, while Rudolph made huge strides in that regard in 2019 and will remain an invaluable red zone threat, Smith should get the majority of the balls in 2020.

Luckily for the Vikings, and its fans, Smith just also happens to be an amazing ball catching tight end that is more receiver than tight end. With deep threat Stefon Diggs gone, he also might be the best chance the Vikings have to pick up chunk yardage down the field.

That’s something both Kubiak and Zimmer have said, with Zimmer mentioning Smith this week.

“Irv has done a really nice job. He has a skill set that we need to be able to utilize with the offense. You can get linebackers in space, and safeties in space, and actually sometimes corners.”

That’s football speak for this dude creates mismatches for us. Smith discussed 2020, as well, and what the coaches and himself expect :

“I kind of got a good feel of the offense, everything the coaches are asking from me, Now it’s just making that big jump in year two.”

Lastly, Kubiak has spoken glowingly about Smith this off-season as well.

“The biggest thing for me is I just see so much upside. You watch throughout the course of the season we called on Irv more and more I think there’s a big, big upside here. I love Irv as a kid and a competitor he really enjoys coming to work every day so and he’s benefited from sitting right there next to Rudy everyday and watching a seasoned pro go about it. So I think there’s a lot more there and Irv is going to give it to us and I got to make sure that I get him in position to do that.”

With the seemingly perfect combination of need, system and opportunity it is hard to think that Kubiak and company won’t do just that. That’ll leave it up to the recently turned 22 year old veteran to produce, and based on everything we’ve seen from him thus far, that shouldn’t be a problem.

That’s a relief because the Vikings are really going to need him in 2020. Stefon Diggs was, breaking news, traded this off-season to the most hilarious team possible considering his baseless gripes and who he now has to pretend he is excited to “catch” balls from.

That left a douche bag sized hole in the Vikings offense, one that averaged nearly 18 yards a catch in 2019. While it is insane to suggest that any tight end (even one of the new tight end/wide receiver hybrids) can replace the best 40+ yard receiver in the league, the Vikings don’t necessarily need Smith to do that.

With Dalvin Cook healthy and hopefully some improvement on the line (although I clearly am VERY skeptical), the 12 personnel grouping of Thielen, Jefferson, Rudolph, Smith jr. and Cook is very enticing.

Throw Cousins into that mix and Kubiak calling the plays, and again, any improvement from the line from a pass-blocking perspective, and this offense could be better than the 2019 unit (especially as Thielen missed most of the peak period of the Vikings’ offense from last season).

Luckily, Smith can also help pick up some of the slack in the pass blocking arena, which would keep him on the field more and open up opportunities for him and Cousins to connect more as well.

With the above and the presumed mismatches created by 12 or even 22 personnel (2 running backs, two tight ends, one receiver) the only issue I can see from a speculative standpoint would be the glut in the middle of the offense.

Vikings superstar receiver Adam Thielen does get credit as one of the best neo-possession receivers in the league and in history. However, he doesn’t get the credit he deserves for what he does out of the slot and how he has revolutionized what it means to be a slot receiver in the NFL.

Most casual fans think of Wes Welker when they think of a slot receiver, but Thielen has done things Welker either never did or rarely did. As our friends at PFF point out. 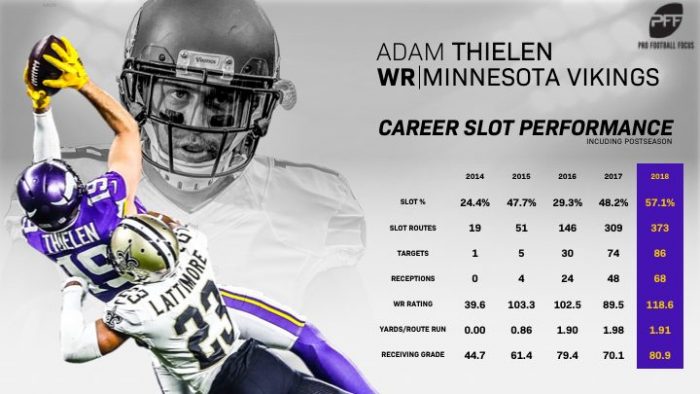 When you add the loss of Diggs and the drafting of slot monster Justin Jefferson (who ran 99.5% of his routes from the slot in 2019), KJ Osborn (who has been both a slot and outside guy but should only produce from the slot in the pros, things get murkier.

“He led the league in slot receptions and was one of the most efficient receivers on deep throws from the position. On passes targeted 20 or more yards downfield to wideouts lined up in a slot position, Thielen was one of four to haul in three touchdowns while accumulating 150 yards or more.”

That means the reality for the Vikings is as follows. You lose your deep threat and you still have a superstar receiver in Thielen who catches most everything you throw his way, but he does most of his deep ball damage from the slot.

So you draft a receiver who primarily did slot work his breakout year, which doesn’t mean he can’t also play on the outside but he will have to acclimate to both the speed and strength of defenders in the league while also acclimating to press coverage as he ran freely off the line, from the slot, in 2019.

Luckily you have two great, and contrasting, tight ends also on the roster in Kyle Rudolph who is more of a slow/plodding old school tight end who seems like a power guy but isn’t known as a great blocker or yards-after-the-catch tight end. He makes up for that by catching about 80% of the targets thrown his way.

Enter Irv Smith jr. who is a wide receiver/tight end hybrid but also an elite blocker. He also ran about a third of his routes from the slot in 2019 according to Rotoworld.com.

Of his 36 grabs in 2019? 13 were from the slot (which makes sense). However, of his 311 receiving yards, nearly half (148) were from the slot and he also caught one of his two touchdowns from the slot. Fortunately he also had 103 of his 147 yards after the catch from OUTSIDE the slot, so while he did pick up more yardage per grab from the slot, he also broke more YAC on standard tight end routes.

If anyone can figure all of this out it is new offensive coordinator Gary Kubiak and his team. However, unless the line makes marked improvements in the passing game this could all be for not as we found in 2019. And 2018. And 2017. And 2016.

In the mean time I’ll be grabbing Smith Jr. for my fantasy leagues, especially my dynasty league. Someone has to replace Diggs, after all.