I’ve spent week after week since the start of the 2018 season attempting to figure out why Minnesota Vikings fans were spending so much of their personal energy explaining away the first potential franchise quarterback we’d ever had as millennials (that wasn’t immediately cut down via knee injury a la Bridgewater or Culpepper). Outside of the emotional attachment to Teddy, then Case Keenum, I have to think that the real reason comes down to dollars and cents.

Breaking news: The Vikings gave Kirk Cousins the largest contract in NFL history in 2018. Many immediately felt that not only did the Vikings overpay, but they’d ruined their chance to capitalize on years of measured team building by overspending on a cap-busting QB.

Now? Is it really fair to call Cousins’ deal as any of those things?

As expected, once most elite QB’s saw Cousins deal they all re-worked their deals to ensure that if Cousins was making not just that money, but that guaranteed money, they should make more. And make more they have.

The most obvious and extreme example of this is new face of the NFL Patrick Mahomes, who according to Betway signed a 10-year deal for $450 million this off-season.

That isn’t the best example of how or why Cousins’ deal made sense for the Vikings in 2018, even though it does explain why Cousins will be due a fully guaranteed $45 million in 2022 once the first second of the first day of the first week of the 2021 season starts.

So, let’s take a look at Cousins first deal in a few different ways. First, the current percentage of the Vikings’ salary cap that his deal comprises, to see where his numbers stack up and what it means for the rest of the Vikings’ cap. 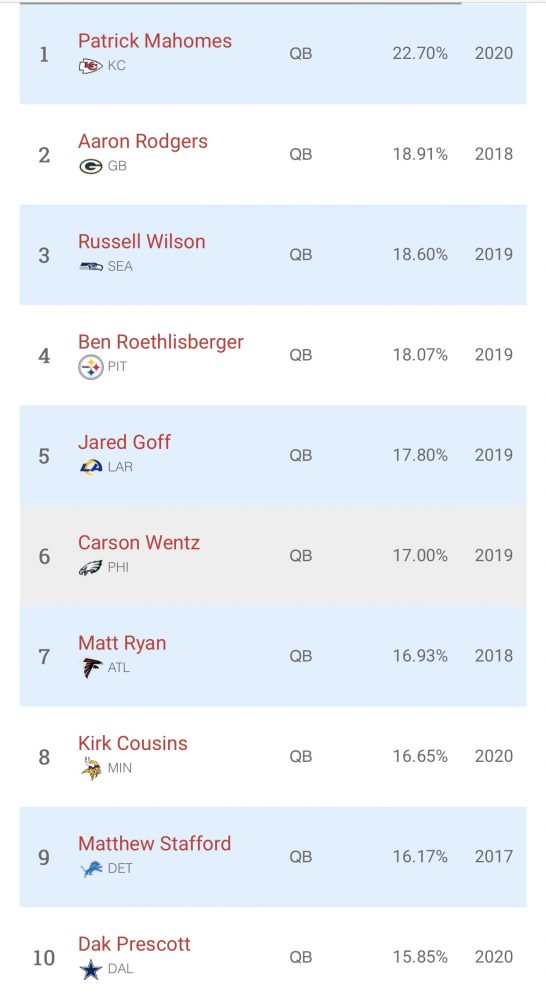 As you can see, Cousins’ deal is 16.65% of the Vikings’ cap. When you look at Cousins’ peers, and also the fact that he is the second-most quarterback in NFL history, that seems like money well spent by a franchise that hasn’t had the same QB play full back-to-back 16-game seasons since 1978.

From here on out I’ll be reposting an article I wrote last season before Cousins helped the Vikings upset the Saints in the Wild-Card round of the playoffs (behind the 27th-ranked pass blocking offensive line nonetheless), as well as an article from The Washington Post’s Neil Greenberg, titled ‘Kirk Cousins went from bust to bargain this season’ outlines a pretty nifty metric for examining Cousins’ impact per dollar spent by the Vikings.

Thanks In his article, Greenberg uses a metric from TruMedia that breaks down expected points added per game from the addition of a new quarterback. After finishing as the 14th “best” passer in the NFL last season, Cousins only added 0.2 expected points (which is, according to Greenberg “the number of points scored above what we would expect given the down, distance and field position of each play”). How they determine that I’m sure is reliant on some fancy algorithm that’d give me a nosebleed, so I’ll just take their word for it.

Comparing that performance to Cousins’ 2018 salary, Cousins only “earned” $1.1 million in cap dollars in 2018 (compared to his $24 million dollar cap hit). So, yeah, I get the frustration from last season even if I don’t really agree with the logic (as the offense was a complete mess last season from the line down to the running back, all the way up to the offensive coordinatorS(plural)). But, again, let’s take this as gospel for the sake of argument as it at least is consistent in analyzing quarterback play solely, so it’ll give us an idea as to what Cousins’ performance means in 2019.

Speaking of which, Greenberg discusses the early-season woes of Cousins and the Vikings, then goes into Cousins’ post Week 4 breakout. According to Greenberg/TruMedia, the Vikings offense is scoring eight points per game more than expected on Cousins’ throws (that includes Weeks 1 through 4). That means, according to their metrics, that Cousins is performing at a level that’d require a salary this season of $47 million. That amount is so high that it almost makes up for 2018, bringing his total earned salary to $48.3 million of the $53 million he’s made.

You can see that below, courtesy again of TruMedia and Greenberg (as well as The Washington Post): 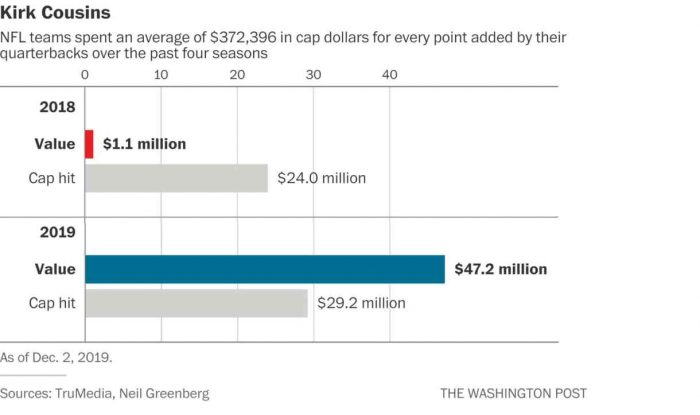 That means that if Cousins has a 2022 similar to 2019, he would more than earn his $45 million dollar salary. With center-turned left guars-turned right guard Pat Elflein and Dakota Dozier helming the left side, hopefully the Vikings will improve in terms of their pass protection in 2020. It seems that with any improvement the sky could be the limit for Cousins and this Vikings offense.

Otherwise, Cousins will really need to focus on the advice he’s received from Vikings legend Fran Tarkenton this off-season and continue to run like his life and the Vikings passing game depend on it.

Joe Johnson started purplePTSD.com back in 2015 & purpleTERRITORYradio.com in 2019, and purchased VikingsTerritory.com before the 2017-18 season , used to write for VikingsJournal.com and is the host of the ’Morning Joes’ & ‘About the Labor’ Podcasts, as well. Follow on Twitter: @vtPTSD

Have you considered hiring an editor for your articles? Salient, intelligent, points are lost in the mess.

I am making $125 per hour working online on my laptop among my family. I continue doing work in my room talking to them. Its too easy to complete it no experience or skill required. You just need internet connection and PC/Laptop. For more information visit……… Read More