If the Vikings had to change their name… 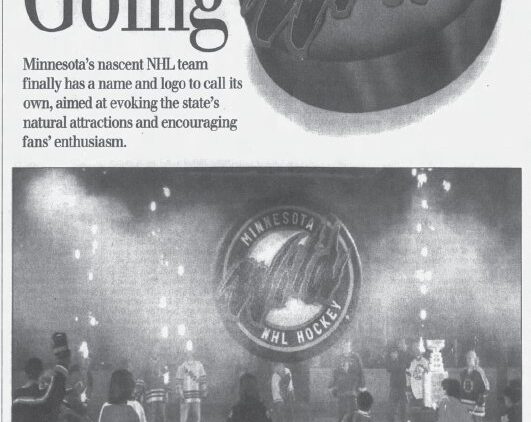 With the Washington Racialslurs finally changing their name for the grossest reason (because they had no choice, from a financial perspective), and because as the Daily Norseman author who wrote the article I’m going to opine about (Christopher Gates) rightfully pointed out; there isn’t much else to talk about… What would/could/should the Vikings be called if they had to change their name for some reason.

Again, there isn’t any sort of call from the Eye of Sauron-esque roving outrage on social media calling for the Vikings to change their name because of their propensity to, you know, basically Bill Cosby it up all over Europe. But, it’s mid-July and this has been a pretty dry off-season… So, let’s think of alternate names for our favorite football squad.

I do want to preface this by saying that I think the Vikings are the best named sports team in the world and they also have the best name-to-uniform ratio, as well.

It checks all the boxes. The name makes sense, for one, and is something relatively unique to the area. It also invokes a sense of pride and is also a reference to something that implies toughness and something to be feared.

To find a bad example of that, we actually only have to cross the Mississippi river to St. Paul, and the unfortunately named Wild. I remember vividly watching the live unveiling of the Wild’s name on TV back when they were a new entity and being profoundly disappointed.

They lowered this giant puck down from the ceiling of Aldrich arena in Maplewood (if I recall correctly), and at the time we knew what the options for the team were.

Now, the Wild to me were the worst option of the bunch, something that apparently many people agree with me on as the Wild have been listed as high as 4th on the list of worst names in professional sports.

The reason why I think they’re bad is because they don’t check any of the above boxes. It isn’t specific to the region, it doesn’t invoke any sort of pride or imply toughness or fear. Sure, it makes sense, I guess (as every state has some wilderness).

But, “The Wild” is basically a vague concept, like naming the Vikings something like the “Minnesota Water”, the “Minneapolis Forest” or the “Upper Midwest Piece of Land”.

While some may disagree, I actually liked the “Blue Ox” the best. There is actually an article on another site stating that while The Wild is bad, it could’ve been worse because they could’ve been named that.

That’s nonsense and I’ll tell you why. I’ll let you guess and I’ll give you a clue by quoting the 90’s classic, Friday, starring Ice Cube and Chris Tucker.

Babe the Blue Ox isn’t part of a legend specific to Minnesota, but it’s close and would help reinforce that Paul Bunyan is from Minnesota.

Because of the (mostly dead) rivalry between Minnesota and the other states (and parts of Canada) claiming that Bunyan and his trusty Ox, Babe, were from their state or province… There would be some implied pride… Amongst… the… 150 year old lumberjacks out there.

There also was a “professional” roller hockey team around that time that had that name and they had a really great logo.

Keep in mind this was done on a roller hockey budget

Compare that to the ManBearPig and the Christmas colors that the Wild ended up with, and you’ll see why I dislike that name (add to that the fact that they were very heavily connected to St. Paul, and you have yourself a rare hatred trifecta).

What can we learn about this when coming up with new names for the purple? Again. Boxes.

It has to be something specific to Minnesota that also invokes pride and fear while making sense. I’d take the Fighting Pike, but that too was already taken (this time by an Arena Football team). 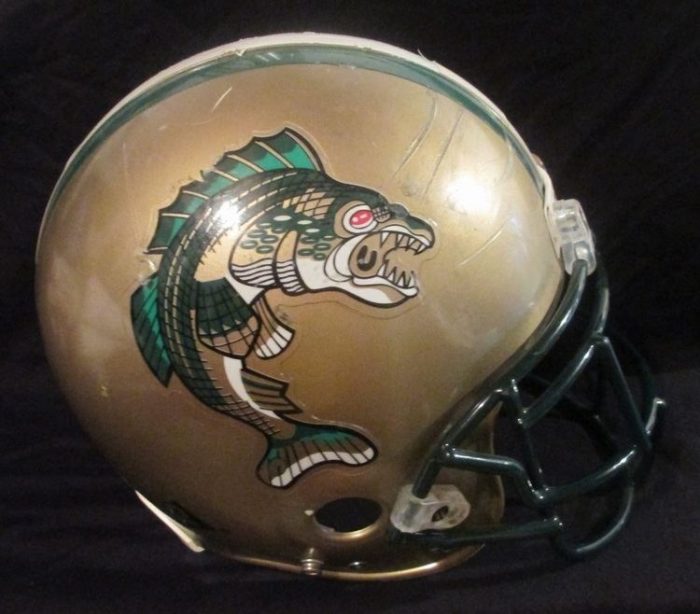 The Minnesota Moose, also out…

Thanks to global warming this is the last moose in Minnesota

The Moose logo has a warm spit in my heart also, as it was immortalized by appearing in the background of one of my favorite movies ever, ‘Happy Gilmore’.

See if you can spot it…

Friends listen to ‘Endless Love in the Dark…’

What other animals represent Minnesota?

Loons? But they’re also unfortunately a synonym for crazy people and not something that strikes fear in anything outside of small to medium sized fish.

According to Wikipedia, the following animals are either representative of Minnesota and/or have been nominated for the state mammal:

“Since 1971, the white-tailed deer has been proposed as the state mammal eight times. Other creatures proposed as representations of the state have included the northern leopard frog, the eastern timber wolf, the thirteen-lined ground squirrel, and the Blanding’s turtle.”

I know what you’re thinking, the “Minnesota thirteen-lined ground squirrel” just rolls off the tongue?

That means that we might have to skip the animal route and go to the historical occupation or industry a la the Houston Oilers, the San Francisco 49ers, the Dallas Cowboys, the Texas Rangers, or the Texas Don’t Mess with Texas’ or the Texas We Clearly Love the Fact we are from Texases.

You ever notice that 99% of usernames online on Xbox Live, Playstation Plus or Nintendo We Exist Too reference Texas? Don’t mess with Texas?

What careers or industries are specific to Minnesota? Frost bite doctors? Something related to the Iron Range? The Minnesota Taconites? That could bring them a fortune from advertising Taco Bell’s 24 hour drive through?

That leaves myths, legends or general history (a la The New England Patriots, the Blue Ox or the Tennessee Titans).

According to Only in your State, the top six urban legends or myths in Minnesota are the Kensington Runestone, the Hairy Man of Vargas (lets put this in the maybe pile), Dead Man’s Trail, Grey Cloud Island, the Lake Pepeny Serpent and the Wendigo.

It’s not hard to see the winner there as the Wendigo is essentially like the Sasquatch’s bad ass cousin. It isn’t solely specific to Minny, but it’s something that reinforces our cold winters (which invokes weird pride), could have an awesome logo and mascot, and clearly is tough and scary AF.

Don’t believe me? Take a gander at what a Wendigo is supposed to look like: 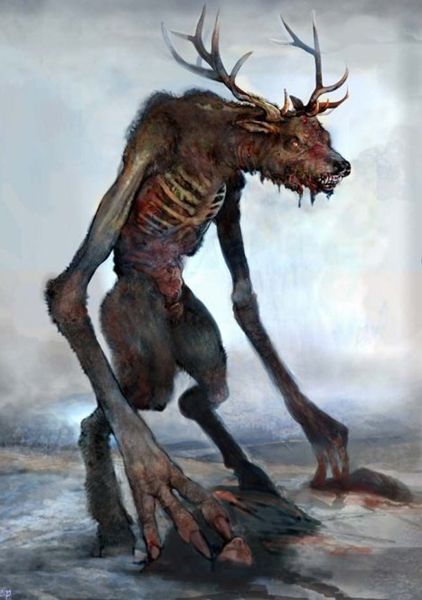 Meth. Not even once.

The helmet could have three claw marks on each side, or the decapitated head of some guy named Gary who disappeared while going hunting alone that one time. Or, even better, not that. How about deer antlers on each side? 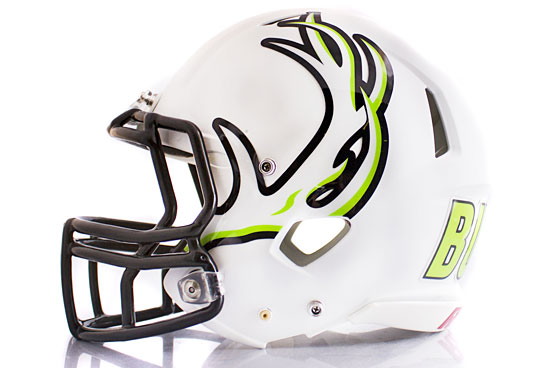 The green represents all the 3M chemicals in ohr respective bloodstreams

For colors they could go with essentially whiten on white for their home jerseys, and for their road uniform?

Some sort of white over dark brown on the jersey to represent their exposed rib cage, with brown pants all the way down to about 4-5 inches of dark black above their cleats (or essentially mandated black cleats for each player) to represent their hooves. 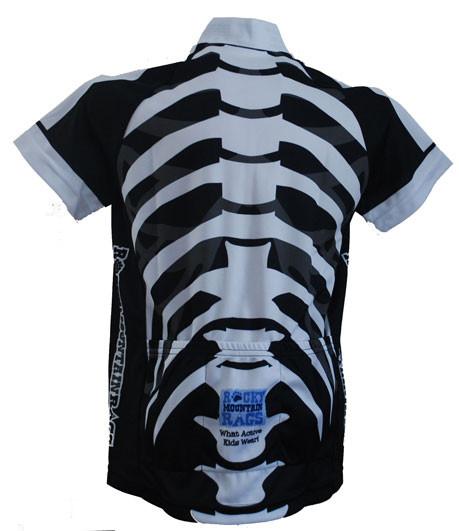 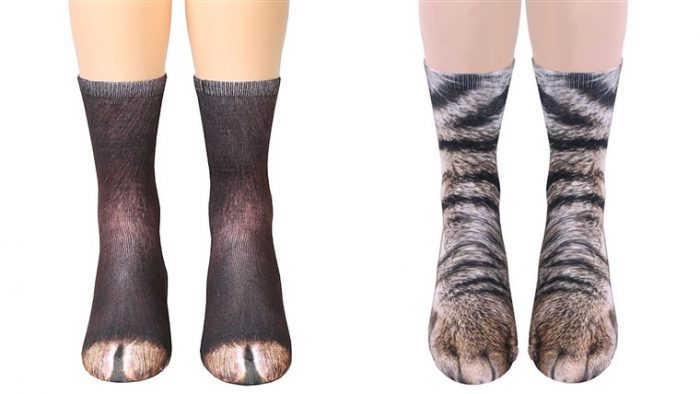 Or, maybe we should just stick with the Vikings?

Let us know what name you’d choose in the comments!