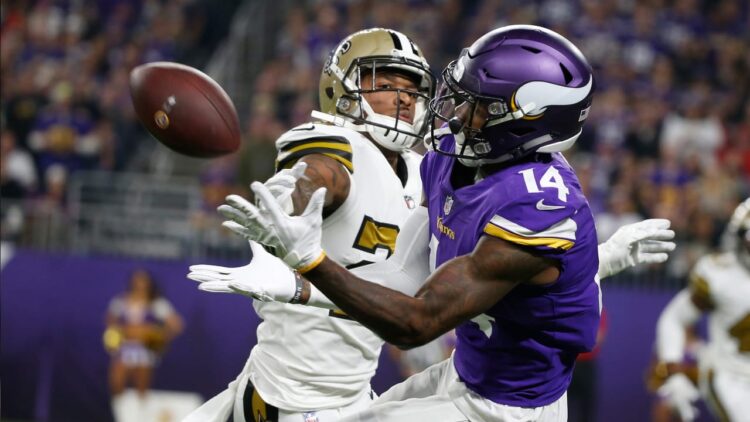 Every Minnesota fan had a hunch the Vikings were going to make some roster noise during the offseason. All indications pointed to them shedding salary on defense, plus addressing the often disgruntled grumblings that came from one of their star offensive players.

A pair of high-priced defenders exited, as well did the Vikings give Stefon Diggs his wish for new digs. They inked the free agents they were expected to sign and cut ties with the others. Plus, Minnesota maneuvered multiple times during the NFL draft; swapping picks to get players they targeted to fill these voids.

It’s not often that an NFL team can lose three starters off their defense, trade a high-profile skill-position player from the offense, but actually improve. We’re going to give the Vikings a grade on some offseason moves. We’ll show why these grades link to early Super Bowl odds to point to Minnesota as a team potentially flying under the radar.

This is still the core of a team that won 13 games in 2017, falling one game shy of playing the Super Bowl. If the offensive line can improve with the new additions and better play by a group of solid returning veterans, what was a weakness could be a strength. You can find Super Bowl Odds all season long at Lineups.com

This will be Minnesota’s 60th season. Mike Zimmer will try to take the Vikings to the playoffs for the third time in four years. During the offseason, Minnesota cut ties with a couple high-priced salaries.

However, the Vikings’ staff did a superb job reconfiguring the team to improve on last season’s 10 win mark. Probably the biggest change out involved a trade and then connected draft pick.

Trade Stefon Diggs to Buffalo (A+) – Minnesota parted ways with oft disgruntled wide receiver Stefon Diggs. Diggs salary and ever-changing mood is now the Bills’ problem. That would warrant Minnesota good marks on the deal by itself.

However, the Vikings doubled their wide receiver depth with two of the three draft picks they got in the Diggs deal. We’ll grade those in a moment. On the trade of Stefon Diggs itself, Minnesota parted with ways with a problem and saved money in the checking account.

First Draft Pick Justin Jefferson (A) – To support the A+ grade we gave Minnesota for unloading Diggs to Buffalo, they immediately filled the void. The Vikings earn strong marks for who they drafted as well.

Minnesota appears to have hit it big when they took last year’s NCAA leader in receptions. Jefferson hauled in 111 passes, 18 of those TDs, the second highest total in the nation. This young man will quickly help Vikings fans forget the name Stefon Diggs.

Second First-Round Draft Pick (A+) – With the 22nd overall pick, they got their pass catcher. Minnesota’s front office did a nice job carving off bloated salaries on defense. However, two of those were primary cover-corners.
We give Minnesota a B+ for salary cap management by allowing Mackensie Alexander to exit for Cincinnati. Another B+ move for simply saying thank you and goodbye to Xavier Rhodes’ $3 million-plus paycheck.

But, where would they find people to cover the other people’s pass-catching people? Well, the earned an A+ for their second first-round pick in as much as for the player they drafted, but how they parlayed one first-round pick into a total of three draft picks.

Second-Round Draft Pick Ezra Cleveland (A) – Minnesota scores a solid A with their second-round choice in the draft. The A is supported by the fact that they saw the player they needed would be available and waited patiently to get him.

With their second-round selection, Minnesota took a smart, athletic left tackle Ezra Cleveland. Cleveland has the intelligence to grasp the professional blocking mindset quickly, plus the skills to be a staple at left tackle. Minnesota earns a solid A for this pick.

Third-Round Pick Cameron Dantzler (B+) – Minnesota began the third-round of the draft with two selections, one a compensatory pick which they traded to New Orleans. They would stay put with their 89th pick and add depth plus talent to the secondary.

Dantzler earn All-SEC second team his junior year and then decided to declare for the draft. He is a player with outstanding potential. During his final college season, he was on the watch list for three national defensive awards.

Dantzler is a lanky player, nicknamed the needle. No one who has played against him dismisses his build. Dantzler is known as a ferocious hitter. This is an athletic player who also played quarterback in high school.

Now, with Dantzler plugging the second cornerback hole with a draft pick, you might ask why we gave Minnesota only a B+ for this round. It involves trading the second selection to the Saints.

The shift handed them a total of three fourth-round picks, plus New Orleans’ sixth-round selection. Our only issue is that there were a couple of solid players Minnesota could have nabbed with that 105th pick. This is still a solid B+ collectively.

The Final Four Rounds of the Vikings’ Draft (A) – Minnesota kept all three of their fourth-round picks, two coming from deals. With the first of these three picks they reinforced the D-line with defensive end DJ Wonnum out of South Carolina.

They took Baylor’s DT James Lynch with the first of the two trades from New Orleans. The Vikings finished the fourth round with more defense, by taking Oregon linebacker Troy Dye.

Dye is rated a little undersized, but Lynch is a serious contender for a starting spot. The former Baylor Bear was a consensus All-American first-team pick his final season. Wonnum is a strong edge-rusher and proven team leader.

He was the Gamecocks team captain. Minnesota made changes in their fifth-round order, but still held onto two picks in this round. They added a very intriguing addition to the secondary with Temple cornerback Harrison Hand.

Seeing the player they wanted would be available later in the round, the Vikings sent Baltimore the 170th pick and waited six spots to add depth at wide receiver. KJ Osborn has outstanding skills at wide receiver.

But, Osborn also excelled as a kick returner for the Miami Hurricanes. Minnesota continued to maneuver the draft ladder, dropping down two spots to add offensive tackle Blake Brandel from Oregon State, but getting another fifth-round pick next year in the deal with Baltimore.

The Vikings seemed to achieve all their contract objectives. The process allowed them to keep the players they valued most. They collective grade for free agents is a solid B+. Most of the grade is because of what they got rid of, as much as who they signed.

Shipping off Diggs and then turning that trade into essentially three perfect replacements was huge. One player they did resign was safety Anthony Harris. Along with the two highly prized cornerbacks from the draft, Minnesota may have improved in the secondary.

The two defensive linemen drafted scored well, but picking up former Baltimore Ravens DT Michael Pierce may prove the shrewdest of all free agent moves by the Vikings. Each of the pieces lost to free agency was filled.

Minnesota revamped the defense with a calculated and successful draft. Everyone accepted that the salary cap issues facing Minnesota after 2019 had to corrected and they were.

However, while shedding salary, the Vikings scored a solid A grade for adding free agents, keeping their own, and especially with a strong draft. Now, let’s take a look at how we think this grade will materialize in relation to the odds Super Bowl odds currently assigned to the Minnesota Vikings.

Kirk Cousins proved to be astoundingly efficient last season. That will again prove vital in Minnesota winning turnover margins. There is a strong possibility that Minnesota could exit week four with a 4-0 record. It is clearly possible.

As much as we hate to get too many weeks ahead of ourselves, that would clear a path for a chance to come out of the bye-week and all-but take control of the division. There are weeks of training camp and a lot of variables left to play out before the first official coin toss.

However, we think Minnesota might have better than heads-or-tails chance of winning double-digit games. 10 or more wins will pocket the over the win total bet and certainly put them in the NFC playoff picture.

It could as well push them past the Packers to the top of the NFC North division. Earning a playoff berth means it’s a whole new season. This team is talented enough, if they play up to their potential.