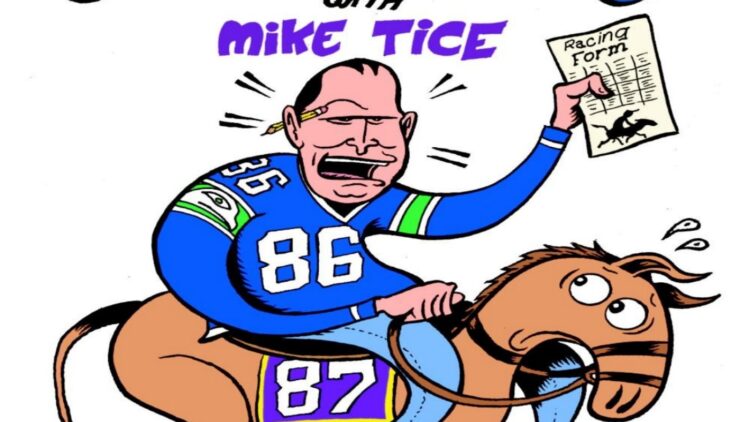 If you hadn’t noticed, we’ve been working with former Vikings head coach, NFL legend, and all-around good guy Mike Tice on his new(ish) Podcast, ‘Odds and Ends with Mike Tice’. We post new episodes here as well as on our new, Minnesota Vikings (and Twins… And Wild… And Timberwolves… And Gophers (Football)) podcast streaming site, purpleTERRITORYradio.com every Thursday Night. We’re very excited to be working with coach Tice, who apparently is even more excited to be doing the show in the first place.

Tice spoke with Pioneer Press scribe Chris Tomasson about his show, and I thought I’d share that with you all since, again, since we’re helping coach Tice promote his show, the article was sort of about us as well (by proxy, and even then that’s a bit of a stretch, sure, but we’ll take what we can get!).

Tice does the show with (and with the help) of his son, Nate. The younger Tice played quarterback at Wisconsin and has some NFL coaching experience under his belt, and like most Millenials with Baby Boomer parents, he also essentially had to help his Dad with the set up of his AMAZING podcast studio.

According to the article, Tice spent over $50k on his podcast studio and it shows, just take a look at his background at the beginning of our draft show (especially compared to mine).

The elder Tice is lucky to have his son on hand for things like that, as if not for the podcast it sounds like things could’ve gotten a bit messy in Ticeland.

“I had the over-under on mom killing him at 18 months…” Nate Tice said, whilst laughing, a common issue for newly retired couples who, especially when you look at the 100-hour weeks that NFL coaches put in during the season, simply aren’t used to being around each other that much. My dad has worked overnight at the post office since before I was born, and he’s getting close to retiring and because of his shift, he typically slept during the day and really only saw my mom or us for 2-3 hours, tops. That means despite the fact that my parents just celebrated their 39th wedding Anniversary, they’ve actually only spent about 6 months of actual time together.

Maybe my Dad needs a podcast? First, though, he’ll have to master the touchtone phone.

But you don’t care about my family! This is about Tice and his amazing podcast!

That show, as you probably noticed, mixes the NFL with horse racing, something that Tice is very interested in (as he discussed on his appearance on my podcast, Morning Joes, as he has owned a racehorse or two in his day). ‘Odds’ actually started solely as a horse racing pod, and also as solely an audio podcast.

Tice fully admits that he started the show to pass the time, stating:

“I was bored. I wanted to stay engaged. The first year I sat out after I retired I was not engaged. I traveled during the football season. But when you sit out a year, you want to get back in it, and one of the things my son said was, ‘Why don’t you start a podcast?”

It was clearly an amazing idea as Tice has the type of voice that makes program directors (and baleen whales) swoon. Beyond that, Tice is a very entertaining and charming host, who has great connections in the league because of his amazing reputation.

For example… he’s had current players like Russell Wilson:

… and former players like Corey Chavous on his show.

That might be cool, and all, but keep in mind that I did an interview with disgraced former Vikings mascot Ragnar a few years ago (I wish that was a joke). So, yeah… I get it. Cough noise. Tice continued:

“It gives me something to do, it keeps me engaged. It makes me have to study all the teams, which is good. … The way I look at it, if I continue to work at it, this podcast can get better and better. It’s my first foray into media. If I can make a little side living off it, it’ll be fun.”

It’s safe to say that he’s got a knack for it, as his interviews are very personable and warm, showing why he was known as a players coach back in the day (in the best way possible, as that can sometimes be used as a slight, just ask Leslie Frazier).

As Tomasson points out, too, there’s Tice discusses gambling a bit on his show as well (in terms of both horse racing and the NFL). Tomasson’s article states that in 2019-20:

So, if you’re looking for some betting advice, a show with amazing guest appearances and a super fancy studio, and one of the best podcasts in the game PERIOD, we highly recommend that you subscribe to ‘Odds and Ends’ on one or all of the following platforms:

Or you can find it here or on our new Minnesota Sports Podcast Streaming Site, purpleTERRITORYradio.com, each Thursday night or Friday morning!

Odds and Ends with Mike Tice

If nothing else it’ll give coach Tice something to do.