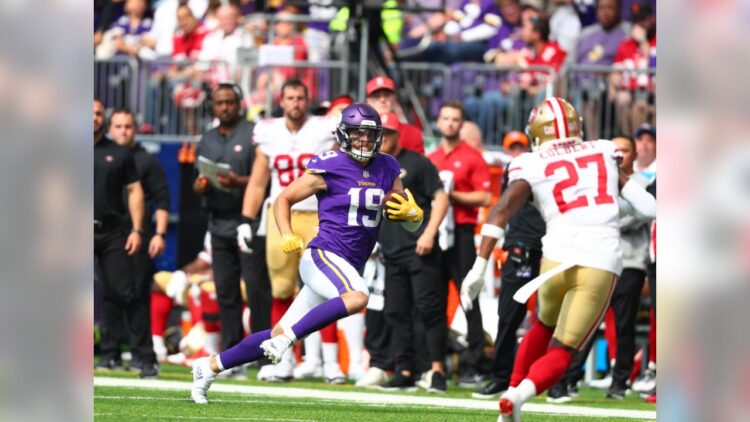 Last Sunday in the Wild Card game’s final drive as the Vikings worked up the field for the winning score in overtime, quarterback Kirk Cousins threw a near perfect pass to the five yard line that Adam Thielen grabbed in incredible fashion. The over-the-shoulder catch required Thielen to site the trajectory of the ball a ways before its arrival, turn his read to the right and track it, as best he could in his periphery, and then secure it in a Willie Mays basket-catch-like manner with the defender draped on his back. It is Wednesday, and I am still thinking about the high degree of difficulty of this phenomenal catch, while a date with the San Francisco 49ers in the Divisional Round game on Saturday is chugging toward the Vikings. I hope the Vikings aren’t still thinking about that catch or that game or that great win because that would likely bring about a repeat of two postseasons ago.

“We were all there two years ago when we had the greatest win and everyone thought we were destined to win the Super Bowl and we laid an egg,” Kyle Rudolph told reporters about the veterans on the Vikings who experienced the high of the Minneapolis Miracle and the low of 38-17 in the NFC title game. “We need to go out and play well in San Francisco or it’s going to be over just like that.”

A hangover of a celebration like the one following the last playoff win over the Saints would be the worst thing for the Vikings. They are capable of beating anyone still in the playoffs—including the number one-seeded Niners, but only if they come to the game focused, confident and resilient as they were last Sunday.

You don’t have to look far to find someone who thinks the Vikings won the tougher game last weekend and face an easier opponent this week. There are not a lot of facts to back that up, however. You only need to look a little further to find someone who gives the Vikings about the same amount of chance to win in San Francisco as they gave them in New Orleans, with the 7.5 starting line is comparable to the one against the Saints. That view doesn’t hold much water either, as the Vikings will be competitive again this week, but only if they can avoid an emotional letdown like the one they experienced in 2018.

They seem to be working against doing so—they shut down the celebration much quicker this time around. But that is no guarantee of victory—it just makes the odds better that they won’t look like as hapless as they did in Philly.

The Vikings face a different kind of opponent this week. The excellent defensive game plan that head coach Mike Zimmer plotted against Drew Brees last week likely won’t be as effective. For one, the Niners offensive coaches have seen it, and secondly, San Francisco quarterback Jimmy Garoppolo is much more mobile than Brees. Garoppolo (who was 12th in passing yards and T-5 in touchdown passes during the regular season) provides a completely different set of challenges with his ability to get out of the pocket.

Garoppolo’s 27 TD passes are nice, but he also is T-8 in picks in the league with 13. He has been known to get a little rattled when he does stay in the pocket, but generally he can extricate himself and keep a play going.

His targets on the outside are not as well known or accomplished as the league leader the Vikings faced (and slowed down) last week in Michael Thomas—former Denver Bronco Emmanuel Sanders has the best pedigree, although Deebo Samuel is starting to change that. Still, Garoppolo has the ability to find just about anyone on his offense with hands from running backs Raheem Mostert, Tevin Coleman and Matt Breida to that one particular problem named tight end George Kittle.

Kittle is the Niners leading receiver with more than 1,000 yards and five touchdowns. You might counter that the Vikings defense has only given up one tight end touchdown this season, and that is true, but Kittle is the best tight in the league and is capable of doing plenty of damage before he reaches the goal line, where any of the Niner running backs will be glad to take it across. Shutting down Kittle (whether it is Andrew Sendejo or Jerome Kearse or anyone else) will be job one for the Vikings defense and crucial to a Purple victory. Last week, the Vikings faced the number three scoring offense and this week they move up to trying to stop the second best one in the league at 29.9 points scored per game.

The Niners defense is another matter altogether. They unit is number two in the league in yards allowed (281.8 per game) and that is primarily attributable to their number one ranked pass defense—which gives up an amazing 169.2 passing yards per game. That provides a unique challenge for Kirk Cousins and company. The good news is that Thielen demonstrated that he was back at full speed last week and presented a two-headed attack with Stefon Diggs in the passing game (that is, until news on Wednesday of an ankle injury in practice had Thielen listed as limited). Even Rudy (who grabbed the game winner in the Bayou) has come on as the season has progressed, so the Vikings passing attack may be as strong as it has been all season.

It could be another game where the Vikings try to establish the run in the early going with a refreshed and strong-running Dalvin Cook back in the lineup and Alexander Mattison returned to spell him. This group, with the help of another decent performance from the offensive line, will go a long way to (hopefully) putting some points on the board and opening up the passing game for Cousins. The Niners defense was ranked eighth in the regular season giving up only 19.4 points per game (the Vikings were fifth at 18.9 ppg.), so they will have to grab the points wherever they can find them.

This will be another low-scoring game, despite two good offenses on the field. It’s a good thing, perhaps, the game is on Saturday, so the Vikings don’t have an extra day to relish their Wild Card win and become flat. What may be the best intangible in their favor, however, is the fact that the Vikings have a number of players with playoff experience, both last weekend and in 2017-18 ,while the recently minted Niners are lacking in the category, comparatively speaking. If the Vikings can start fast and strong in this one, it may force the Niners to press a little and perhaps not play like the machine that they are. Garoppolo has certainly seen plenty of playoff games standing on the sidelines with the New England Patriots, but he doesn’t have a start in the postseason—plus he has had all week to think about his first one.

The longer he gets comfortable and the action resembles a regular season game for him, the worse for the Vikings. So, it is imperative that the likes of Everson Griffen and Danielle Hunter greet him early and get in his face often. Throw the QB off (like they did last week to Brees) and you can slow down a high scoring offense. It says here that the Vikings will and will also score enough to win.