Despite doing things Teddy never did, Cousins gets 1% the credit/love/respect from Vikings fans 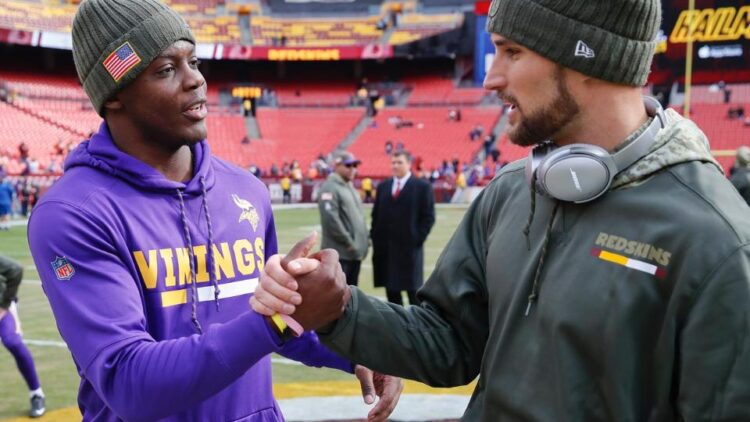 I just finished writing an article about Zimmer being one of the front-runners for NFL Head Coach of the Year and something ended up occurring to me while I was finishing that piece.

If the Vikings make the post-season, Zimmer should be Coach of the Year

I was writing about the blueprint this Vikings offense has shown it could potentially build upon as it makes an improbable run for the playoffs after starting 1-5 and going into the bye after losing to the previously winless Atlanta Falcons.

Dalvin Cook is playing at a god-like level, and somehow people are using that as yet another way to bash Kirk Cousins. There’s another local/independent site that literally wrote an article titled ‘Kirk Cousins is getting paid $40 million to hand the ball off to Dalvin Cook’. So, as I was writing about that blueprint and comparing it to the 2012/2015 Vikings, who made the playoffs mostly on the back of Adrian Peterson, it occurred to me that (yet again) people are somehow bending over backward to knock Cousins despite the fact that had the 2012/2015 versions of Cousins put up the stats Cousins has, they’d be either still in the league (in Ponder’s case) or even more beloved, but for actual reasons, in Bridgewater’s case (who had back-to-back seasons with the Vikings before he was injured with a QB-rating of 85… Cousins had an average of over 107 in 2019, and nearly 100 in 2018… And he’s a bust but Teddy was the second-coming? Okay.).

It’s an important comparison as the 2020 offense feels like the 2012/2015 Vikings, years where the Vikes went 10-6 and 11-5, respectively, mostly due to Adrian Peterson (who had nearly 2,100 yards and nearly 1,500 yards, respectively). The difference here is that this Vikings offense also has the potential to put up elite statistics through the air, something we saw from Week 5 onward last season even with Adam Thielen mostly being sidelined by a hammy.

Oh, and that Cousins actually won a playoff game whereas Ponder’s Vikings lost to the Packers in the Wild Card round and Teddy’s Vikings lost to the Seahawks in that same round. Sure, Teddy’s team should’ve won that game had Blair Walsh been as good as a JV field goal kicker but had the Vikings lost to the Saints in last season’s Wild Card game while mustering only 9 points, he would’ve been even more loathed by those still upset that he temporarily held the title of the highest-paid QB in the league in 2018.

Vikings quarterback Kirk Cousins may be “overpaid” or “never going to win a Super Bowl”, but as I laid out AGAIN in this article about the final negative narrative that Cousins hasn’t knocked down (his record in Monday Night Football games, which really doesn’t tell us much)…

With MNF looming, Cousins can knock down final negative narrative (to those actually paying attention)

… Cousins has done things as a Viking that we haven’t seen since Brett Favre in 2009, or beyond that Daunte Culpepper in 2004. He had 4,000 yards, 30 touchdowns and 10 interceptions, the first 4k/30/10 or less season in team history during his 2018 campaign. He had less yards in 2019 mostly due to the emergence of Dalvin Cook, but he also only had 6 interceptions while joining the MVP race from Week 5 on despite splitting votes with Cook.

Remember when everyone bent over backward to explain away Teddy’s inability to hit wide open receivers down the field? When Mike Wallace was open by 5-yards on seven or eight plays but because of his throwing motion, Teddy overthrew him. That lead Wallace to spurn the Vikings for the Joe Flacco lead Ravens, saying he wanted to play with a “real QB”. Sure, he backtracked on that, but he also had over 1,000 yards in his first year in Baltimore, which sort of made his statement true regardless of any takebacks.

People blamed Wallace, not Bridgewater, despite people like Tommy Kramer saying that Teddy’s throwing motion was an issue. Sure, Teddy did have a couple “ice in his veins” moments late in games, but even those lead Zimmer to say things like “We’re trying to get Teddy to play the entire game like it’s the last two minutes of a game”.

One overlooked aspect of Laquon Treadwell’s career was the fact that he was drafted to be Teddy’s go-to guy. They wanted someone who could come down with contested balls as the entire Vikings passing game as relegated to running 10-15 yard button hooks, something that made it hard for the team to see the potential of both Adam Thielen and Stefon Diggs (hence the first-round pick of Treadwell).

I bring this up because Cousins also helped Stefon Diggs finally reach the 1,000-yard mark in both 2018 and 2019, making Diggs the biggest deep threat in the NFL last season. While many seem to think that this team needs to limit Cousins to Sam Bradford in 2016, where he is only allowed to throw the ball behind the line of scrimmage. But that ignores the fact that this Vikings offense is the most explosive in the NFL and that Cousins is the second-most accurate quarterback in league history by almost a full percentage point.

That means that this team could very well build on what Dalvin is doing by lighting teams up through the air, as well. It’s safe to say that the Bears will stack the box on Monday Night, and if/when they do that it’ll be on Cousins, Justin Jefferson, Adam Thielen, Kyle Rudolph, and Irv Smith Jr. to show the league that this is one of the best all-around offenses in the NFL.

This may be the hottest and most exclusive takes ever but the more points this Vikings offense can put up, the less stress they put on their defense. Considering the improvement we’ve seen from the offensive line, Cousins may actually …. GASP… have time to throw really for the first time since he put pen to paper in Eagan.

That should excite everyone, as while Cousins had a bad pre-bye start to his season, he has shown the ability to fight back from adversity while playing for the Vikings. Take the Week 4 loss to the Bears last season, where both Thielen and Diggs made public comments about Cousins’ play. Cousins’ arguably had one of the best seasons of any quarterback in my lifetime (I’d say it was the third best, behind the ’09 Favre/’04 Culpepper seasons) despite playing behind the 27th-“Best” pass blocking offensive line in ’19.

Since the bye, though, Cousins has had an average QB-rating of 140, while being incredibly efficient moving the chains in between monster runs from Dalvin Cook. That should set up more play action passing, something that Cousins is objectively masterful at (perhaps the best in the NFL, with Russell Wilson being his main competition) during his career.

We should get a good sense as to how this offense will react to a team putting everything into stopping Dalvin Monday Night, especially as the Bears are one of the best run stopping defenses in the league. While Cousins is coming off of a three-touchdown game, he hasn’t been asked to do a lot because Dalvin has been so amazing, which has lead to posts on our social media like: “Kirk Cousins is getting paid $40 million dollars to hand off the ball to Dalvin Cook”.

Well, Cousins is actually making $21 million this season, and that’s just not how football works. The Vikings are paying Cousins market rate for a quarterback of his ilk, and as the article I linked to above shows, he’s done a lot more than people will admit/give him credit for. Imagine in 2012/2015 if the Vikings would’ve had a quarterback capable of that 4k/30 TD/10 or less interception stat line? Instead, they had Christian Ponder, who had under 3,000 yards passing, 16 touchdowns and 12 interceptions in 2012 and Teddy Bridgewater, who had 3,200 yards, 14 touchdowns and 9 interceptions in 2015.
But people still pine for Bridgewater, who on the season has a quarterback rating of 98.7 to Cousins’… It has to be what, 50? Considering how many people are calling for the Vikings to eat his $41 million in dead cap space in 2021 and posting dank memes like “durr durr COUSINS durr durr $40 million!”

Wait. Cousins’ rating is 97.7 on the season despite his poor start? Oh, but… but, but BUT Monday Night Football?

So, yeah. Let’s all do ourselves a favor and stop tripping over ourselves to find ways to bash Cousins. Hate him or … Hate him, he is going to be the Vikings quarterback for the foreseeable future and he does deserve some credit for the things he’s done while he also should be held accountable for things he hasn’t done, or that he has done poorly.

Nothing in this world is 100% one way or the other, and it’s impossible to argue that Cousins isn’t the best quarterback this team has had since ’09 Favre. Considering how well Cook is playing, we’ve seen the blueprint for what could be a deep playoff run this season or especially next season. While we’ll learn a lot about whether or not Cousins has got his mojo back Monday Night, we all should be rooting for him to revert to his 2019 form, because despite what some meme on Facebook told you, he did about 10 things last season people said he’d never do and by ignoring that fact you’re just mindlessly bashing your “favorite team’s” chance to win a Super Bowl in a decade.