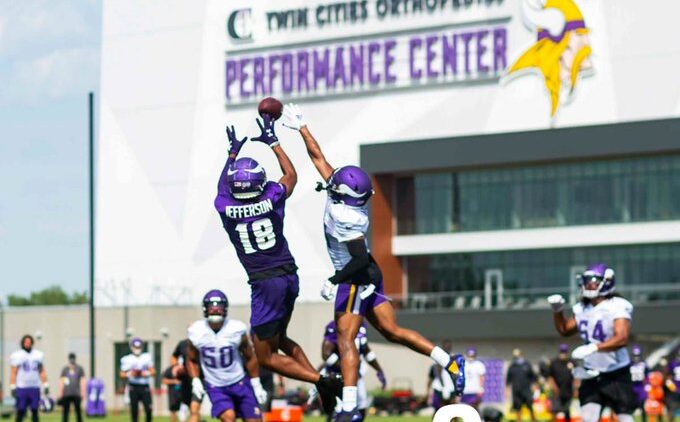 For the first time under head coach Mike Zimmer, the Minnesota Vikings have more continuity on the offensive side of the ball than the defensive side. They’ll need to rely on that heavily in 2020 as the youth on defense happens to be at the most critical parts of Zimmer’s scheme.

There is some good news on that front, though, as it appears that the team is at least attempting to shake up the status quo on the offensive line, which happens to be the Achille’s Heal of the Zimmer-lead Vikings (if Achilles’ heal was made of 7th-round draft picks).

After new offensive coordinator Gary Kubiak announced that the team wouldn’t be moving left tackle Riley Reiff to left guard and that four-of-five starters would begin camp as such, there was finally some admission in Vikings media (outside of my articles, of course) that the status quo clearly wasn’t good enough despite a duo of extensions for both Zimmer and general manager Rick Spielman.

That was followed by an announcement that the team would be moving 2019 left guard and utter disappointment Pat Elflein “back” to right guard, his “natural” position from his pre-center time at Ohio State.

That opened up a battle at left guard between 2019 holdover’s Dakota Dozier and Aviante Collins (which Dozier appears to be winning) as well as 2020 third-round draft pick, tackle Ezra Cleveland.

While the idea of Cleveland at guard is tantalizing as hell (as he’s been physically compared to right tackle extraordinaire Brian O’Neill but hasn’t faced the cream of the crop in terms of talent coming out of the Lays Potato Chips Conference or whatever conference Boise State plays in), the risk of hurting his development as the potential left side O’Neill is a bridge too far if you ask me.

Beyond that, Kirk Cousins has been chatting with Vikings GOAT Fran Tarkenton about scrambling more in 2020, which seems almost impossible as there was a period in 2019 (let’s just refer to that period as “the entire season”) where Cousins essentially completed every pass from outside the pocket. Or rather, outside where the pocket normally would be.

The hope with Elflein on the right, I guess, over 2019 standout Josh Kline (who was released for reasons I’ll never agree with) is that Elflein can get to the second level faster/better than Kline?

Ignore what Kline and O’Neill did together, and that there were extended periods in 2019 where Dalvin Cook could only gain positive yardage from the right side of the line, because apparently the team cares more about screens than running the ball?

Kline missed three games in 2019 and Cook’s per rush yardage average dropped from 5.4 to 2.5. Don’t believe me? Here is his per game average from that time period:

So, the Vikings “saved” $1.4 million this season (while eating over $4.6 million the next two seasons) to jettison Kline and create two positions of need where they’ve otherwise historically failed miserably to even find help at one.

With deep threat and squeaky wheel Stefon Diggs gone, that leaves a lot on the plate of Adam Thielen. Thielen, the only proven receiver of the current bunch, may have some help as rookie first-round pick Justin Jefferson has been, by all signs, been having a great training camp thus far.

Jefferson has had heaps of praise thus far, and also has been so adept at “learning” the offense (which is very similar to what he ran at LSU) that the team is already cross-training him at nearly every available spot in the passing game. That’s huge news for a receiver that has the label of “slot guy” due to his monster season at LSU coming out of the slot about 99.5% of the time.

Take Thursday’s two-minute drill and this grab with 33-seconds left from Kirk Cousins.

This 15-yard grab came over the top of elder statesman in the secondary, Mike Hughes. Vikings.com explains:

“Jefferson used his athleticism to rise above Mike Hughes and snagged the pass for the score, which tied the game at 19 in the hypothetical situation (a PAT was not attempted). The offense began on its own 37-yard line with a minute and 47 seconds on the clock.”

This is huge news as the Vikings can not only NOT afford to take a step back on offense in 2020, but they actually need to take a big step forward to help the young defense acclimate. With Kubiak calling the shots, hopefully any improvement on the line, Cook staying healthy and Jefferson showing multi-faceted talent…

… The Vikings at least have a shot. While I’m still skeptical (as being negative means you’re batting 1.00 since 1961), you could say that I no longer am convinced 2020 will be a sub-.500 campaign for my favorite team.

Since trading Randy Moss after the 2004 season, the Vikings have drafted Troy Williamson, Percy Harvin, Cordarrelle Patterson, Laquon Treadwell and now Justin Jefferson in the first-round (and Sidney Rice in the second). That is five receivers, six including Rice, all from the SEC and four/five of which came during some facet of the Spielman era.

This time, though, the team has no back up plan at the position and while Cook had a great 2019, he hasn’t had the impact that Adrian Peterson had back when the team tried to find a receiver to compliment his talents. Plainly, this team’s success is more tied to Jefferson’s development this season than any receiver before him (since Moss).

While initially skeptical, considering his move to the slot in 2019 (which means he ran free from the line and thus could struggle with press coverage, especially as most scouts have called his strength into account), his knowledge of the offense and talent combined with the second most accurate passer in NFL HISTORY in Cousins and Gary “I bring success everywhere I go” Kubiak, I have (increasing) faith that Jefferson will actually come through on the whole “most pro ready” tag that people have given him (unlike Treadwell, who was labeled the same).

That’s good news, as the Vikings clearly need him.