Could NFL benefit from a lack of college football? 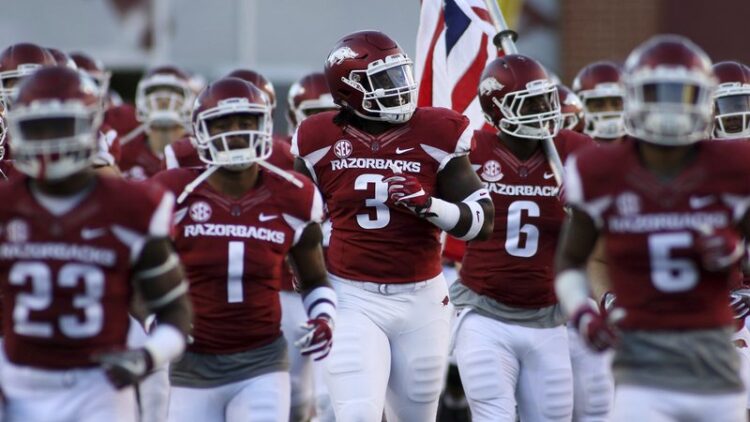 Arkansas' McTelvin Agim smiles as he runs out with the team before the start of an NCAA college football game against Alabama in Fayetteville, Ark. Agim started the final five games for the Razorbacks last season as a true freshman. Now 6-3 and 286 pounds, many expect him to use his quickness and power to approach an all-SEC level this season. (AP Photo/Samantha Baker)

As of the writing of this piece, a few minutes before the clock strikes Tuesday, college football’s 2020 season is officially in limbo.
With the Mountain West conference both cancelling it’s season and also alerting the general public that there is a Mountain West conference, the Big Ten reportedly contemplating a similar move/postponement and the Pac-12 conference meeting Tuesday to determine what feels like the inevitable, it is looking like Saturday’s will devoid of the second most popular sports league in the country until at least Spring.

I’ll admit that it is incredibly enticing, as both someone with a degree in Political Science and THREE NFL websites during a training camp in which the only exposure comes via Zoom, to jump into the whole “THIS IS ALL THE LIBERAL SPORTS MEDIA OVERREACTING” vs. “Umm, look at the rest of the world to see that you aren’t damned if you do, Favre” narrative(s).

However, I do believe that unless the two overlap, my job is to cover the Vikings and NFL and anything outside of that is something that people don’t come here for.

So, while I’m very concerned that the NFL won’t have a full season in 2020 (and what that’d mean for my ability to eat food), I won’t take the bait and explain what my thoughts are on the state of football as it pertains to the political aspect of things.

Instead, I wanted to look at what a potential financial boon the lack of football on Saturday’s could mean for the NFL, a league that rolled out a new COVID Collective Bargaining Agreement just in the nick of time before camp started.

That agreement essentially presumed a massive loss of revenue that’d be capped each subsequent season at a minimum cap of $175 million (down from around $198 million this season and the typical season-by-season increase of about $10 million).

The main loss of revenue for the NFL would be obvious, ticket sales. Those sales account for about 15% of the NFL’s $15 billion-a-year revenue, meaning that the league could be out over $2 billion if stadiums are empty or mostly empty.

What if the league played games on Saturday for football fans who miss their favorite college squad?

To start, college football is a lot more popular and profitable than you might think. Living in Minnesota, a market in which we are absolutely spoiled in terms of sports and also the opposite of spoiled in terms of our college ball (until recently), we don’t really have the sort of following for the Gophers that other Big Ten teams do or especially what teams in sports starved markets like Alabama, Oklahoma or Mississippi.

Just take a look at some of these tidbits from FootballFoundation.org.

The six College Football Playoff (CFP) games, all telecast on ESPN, produced five of the six most-watched cable presentations of the year.

Or this tidbit from November of 2018:

Eight of the 10 most popular telecasts [in the] week [in question] were NFL and college games or related programs, according to Nielsen ratings released [on 11/6/2018].

While the NFL’s TV contracts are locked in (and thus an increase in ratings wouldn’t immediately impact their pocket books), it could increase their revenue when they negotiate their TV deals next off-season.

Could the lack of Saturday ball translate to more money in the NFL’s coffers?

Obviously that money wouldn’t just exchange hands. Instead, I am trying to give a sense of scale to help limit the loss of revenue from NFL tickets by increasing the NFL’s TV ratings for when they re-up their contracts.

The question then becomes whether or not stations like ESPN, which pays $100 million PER Wild Card playoff game, will see any increase in ratings as a temporary COVID bump and not as something sustainable.

The good news is that the league is expanding to 14 playoff teams in 2020, which makes for an extra playoff game and apparently an additional $100 or so million in their piggy banks.

That just makes for $1.9 billion more to go!

But either way, it wouldn’t surprise me if the SEC didn’t cancel their season. Which, of all the college conferences, has the most fervent fan base. It also had the least amount of overlap with pro sports, as the deep South (outside of parts of Florida and Georgia) doesn’t have a lot of pro sports.

With the recent pre-COVID valuation of the Vikings being worth $2.4 billion, a four-fold increase from the $600 million the Wilf family paid for them in 2005, I’ve argued that the NFL owners should just eat any and all revenue losses from 2020 as a thank you to the players that are risking their health and lives to provide us with entertainment.

Any decrease in the cap will be devastating to the league, and will hurt the current state of things as well as how could any team move forward with contract extensions when they aren’t sure how much money they’ll have in a year?

If COVID continues unabated, which it seems it will with Minnesota breaking records this past weekend during August (the most humid month of them all); the Vikings could end up paying two players in Kirk “$45 million in 2022” Cousins and Dalvin Cook over 35% of their salary cap if Cook gets $15 million a year and the cap is $175 million in 2022.

Let’s hope that doesn’t happen and that if college ball is cancelled the NFL will benefit from it.