There’s a project I’ve been trying to put together for the past six months, a documentary about the 2004 Minnesota Vikings. I was a sophomore in college at the University of Minnesota, living with my best friend in DinkyTown, and we were absolutely obsessed with the Vikings. We came of age during Randy Moss’ rookie year, and that’s when, I believe, we converted from “fans” of the team to the type of fan that our fathers were. I look back on that time very fondly, for more than one reason, and I’ve always felt like the 2004 Vikings are overlooked in the pantheon of (regular season) super teams that we’ve been spoiled with as Vikings fans.

Daunte Culpepper had 39 touchdowns, Randy Moss was proving that the Randy Ratio wasn’t the joke people claimed it was, and the Vikings ended up putting up a ‘W on Lambeau Field’ as Moss’ last splash of brilliance before being traded that off-season.

That makes what I do now so surreal. I’ve said this before, but if you were to tell college age me that I’d be working with then head coach Mike Tice (as the exclusive promoter of his AMAZING YouTube show/podcast ‘Odds and Ends w/ Mike Tice’)

Odds and Ends with Mike Tice

, or having Vikings players like Matt Birk (who will be on next week’s ‘Three Deep w/ Wobby’ LIVE @ 8pm (with a special guest calling in, as well!)), there is no way I’d believe you.

It’s been as surreal as you’d think it’d be, and a good example of how amazing covering the team for a living has been, take the most recent guest on ‘Three Deep w/ Wobby’. For those of you who haven’t tuned in yet, ‘Three Deep’ is hosted by yours truly and Mike ‘Wobby’ Wobschall. Each week we have a different amazing guest like AJ Mansour of KFAN, DeShawn Vaughn (our managing editor), Mike Tice, Matt Birk, and this week’s guest Bryant McKinnie.

As someone who care(s)(d) too much about the Vikings, whenever I’ve had a player or coach from that era on one of my shows I’ve made a point to ask them something that I’ve always felt was true. The best way I can introduce the crux of this piece is by explaining an experience I had with my best friend back during the 2004 season.

My best friend comes from a family that owns a household name business here in Minnesota and because of that he always would end up with AMAZING tickets to local sporting events (because apparently people that buy advertising end up getting free tickets (I guess my $5 a day Facebook budget doesn’t cut it?)). I’ve sat on the floor at Timberwolves games, in boxes at every stadium, etc.

It was Week 7 of the 2004 season and the Vikings were 4-1 and facing the Tennessee Titans. I was born super premature and because of that up until the age of 30, like clockwork, I’d end up getting bronchitis (just in time for hockey try outs!). I was particularly stricken at this point, and I also was incredibly hung over, but my buddy enticed me to take the bus to the game with a pint of bottom shelf rum (like leading a donkey with a carrot).

I downed half the pint before we got on the bus and felt a lot better, but I was essentially coughing like Doc Holliday at the end of ‘Tombstone’ the entire time, which didn’t really ingratiate me with the people sitting in front of us at the Metrodome. We had second row seats behind the end zone, and we ended up getting to the game a bit early.

I was pre-occupied with sneaking pulls from the plastic bottle in my waist band while also trying to hold in my bovine tuberculosisness because the couple in front of us had already given me a year’s worth of dirty looks and the coin hadn’t even been flipped yet. I was drinking/coughing in my Randy Moss jersey when I heard this gigantic commotion. I took my head out of my shirt and saw people nearly stampeding one another to reach over the hand-rail.

My first thought? It must be one of the Vikings who was out to stretch out, sign autographs, etc. Much to my surprise, though, it was actually Vikings owner Red McCombs, which I realized before I saw him because I heard someone shout ‘Purple Pride!’ as if they were doing a Colonel Sanders impression.

Now, at the time the Vikings were 4-1 and were favored to win against the Titans (which they did, 20-3). However, this was after a 2003 season in which they also started 6-0 and ended up missing the playoffs (thanks to the ‘NOOOOOOOO’ 4th and infinity touchdown by the Arizona Cardinals). This was a time in which the Vikings had a nigh unstoppable offense but also had one of the worst and most thin defenses in the league.

There was talk, also, that the team either was or almost was fined by the league for being under the minimum salary cap amount (and that they’d used player signing bonuses against the cap, which isn’t how any of that works). Fans, real fans, were frustrated that the team wasn’t investing in their defense and that the window of opportunity that Moss afforded them was essentially being wasted.

I remember a reporter asking McCombs why he didn’t invest in the defense and he said, I kid you not, ‘Because I believe they’re already a championship caliber defense’. That, right there, galvanized how I felt about McCombs and the wasted talent of that era. The literal used car salesman was using tactics reserved for selling a Pontiac Fiero. “This is a reliable car! One owner who only drove it to church! Never spontaneously combusts, too!”. 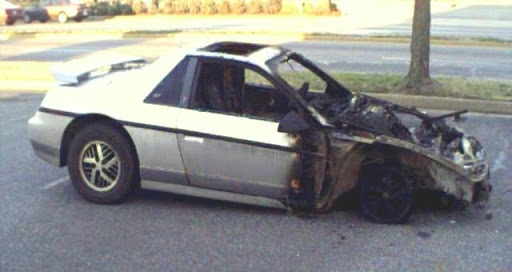 The image that exemplifies the McCombs era

I was in the weird still hungover but kind of drunk phase of my day while also potentially delirious from too many albuterol inhalations but it infuriated me that people wanted to touch McCombs as if he wasn’t actively wasting the talent this team had on offense. Like he was the Pope come to the Metrodome to rid it of the curses therein. Beyond that, there was ample talk that McCombs wanted to move the team either to Los Angeles or his native San Antonio (which’d make sense as their mostly known for the Alamo, which is essentially the historical equivalent of the Minnesota Vikings as a franchise).

After screaming an explicative or two too many, enough to have the security guard come warn me, I articulated my point (the point of which was) ‘WHY DO YOU WANT TO SHAKE HIS HAND? HE’S RUINING THE TEAM SO HE CAN MOVE IT TO TEXAS! TEXAS!’, the couple in front of me turned around and shook their heads at me in a way that actually made me feel the type of shame I’d only felt previously when my parents had told me that they weren’t mad, just disappointed, at/in me.

I bring this up because I don’t think there’s enough talk about that era or how lucky we are to have the Wilf family in charge of things now. I’ve reached out to McCombs for the aforementioned documentary, but his handler essentially said he doesn’t want to talk about that time but appreciates Minnesota, etc.

That brings me to Bryant McKinnie’s appearance on my podcast this week. When I first had Mike Tice on my other podcast ‘Morning Joes’, I asked him if it was frustrating coaching under McCombs. Tice mostly dodged that question (but answered everything else, like essentially establishing that Moss was NOT a locker room cancer as reported back then/parroted by fans from Anoka County, mostly).

With McKinnie, I asked a similar question and essentially said that I’m sure he didn’t want to bash anyone (as he’s a nice guy too) but that college me would come back to haunt/cough on me if I didn’t ask that.

Guess what? He answered!

McKinnie said of playing under McCombs and whether it was frustrating or a palpable feeling that they were missing out on something special because of the lack of investment int he defense:

“When I was there we had the number one and two offense, or something like that, but we had like the 31st defense or something. So, it was like, we score these points but then, we’re letting up a lot of points too. So we were always in the top one or two, I know for at least two or three years in a row, like top one or two offenses”

Surprisingly, because of Tice’s answer on ‘Morning Joes’, he added:

“That could be a little frustrating, and coach Tice would kinda say it, too.”

That sheds light on some behind the scenes drama that we weren’t aware of at the time. I elaborated on my point of view/memory of the time and brought up the salary cap penalization and McKinnie added:

After I was done rambling McKinnie put a bow on the topic by saying:

“It was just because you put up 30 something points, you put up 34 and they put up 36. You have to go out there and score as many points as you can but each week you can’t have a scoring fest, so, sometimes they just let you down. “

So there you have it. As if we needed more proof that McCombs was just the worst. But I do think it’s important in terms of the legacy of players from that era and also basically explains why Moss walked off the field against the Redskins toward the end of that season. The Vikings were collapsing as they did the year before and at 27 Moss had over 9,000 yards and over 90 touchdowns for a team that had a fan base that was increasingly turning on him.

There were reports that when the Wilf’s agreed to purchase the team they told McCombs NOT to trade Moss, but as a final middle finger to Moss and the state he did anyway. Moss was nearly single handedly responsible for years of sellouts at the Metrodump at a time when the team was struggling to fill those awful, awful blue seats. He helped increase the value of McCombs investment, and like the used car salesman he is/was, he essentially sold the Wilf’s a lemon.