Beware of the Dallas Cowboys 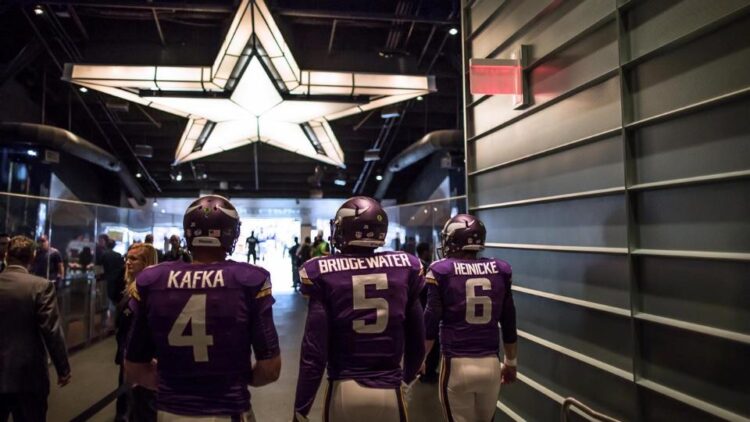 The Minnesota Vikings, with a 4-5 record, are 1.5 games out of the No. 7 seed of the NFC playoffs. The Arizona Cardinals fell to the Seattle Seahawks on Thursday Night Football, an outcome that benefitted the Vikings.

The Dallas Cowboys, with a 2-7 record, are 1.5 games out of first place in the NFC East, a spot that would earn the team a home playoff game. The 2-7 record makes most onlookers vomit, but the NFC East is so despicable that it’s still up for grabs. The Philadelphia Eagles lead the way with a scrawny 3-5-1 record. Theoretically, the Cowboys could be in first place by the end of the month should they win their next two contests and watch their division foes lose games.

Minnesota is in the middle of, what appears to be, a revitalization with their 2020 season. The campaign began terribly as the team stumbled out of the gate to a 1-5 record. Now, the Vikings are 4-5 in winning three consecutive games after exiting a timely bye week. The purple and gold can probably drop one or two more games and remain in the NFC’s contentious playoff picture.

The Cowboys are now – what the Vikings were after Week 6. Searching for answers, scratching heads, and praying an in-season transposition are all on the menu. A trashy division should keep the optimism alive, but the Cowboys must win some football games sooner than later.

The Vegas spread favors the Vikings by a touchdown. Be cautious, though, as that should not give Vikings faithful excessive confidence.

Andy Dalton is Not Terrible

To date in 2020, the league has only seen a bad edition of Andy Dalton in Dallas. His performance throughout his career is not emblematic of an awful quarterback. Let’s be clear, he has not played well with Dallas in a tiny sample size. He is now recovering from a vicious concussion and the coronavirus. The Cowboys will depend on his about-face to perhaps win the NFC East.

Dalton cannot be classified as a Nick Foles, whom the Vikings saw last Monday night. Foles habitually plays underwhelming when he is anointed the starting quarterback of a team. Only in reservist spots does Foles play like a Super Bowl MVP (which he is). Dalton is different. He merely had a bad opening act to the Dallas section of his career. No one should be stunned if he returns to the Bengals version of his performance – one that was generally decent.

The 33-year-old Dalton is a reasonably-good [but not great] NFL signal-caller. He is the type of player that could take advantage of the Vikings young cornerbacks if in-game momentum flows in the Cowboys direction. This has happened to the Vikings before – paging Rick Mirer, Doug Flutie, or Matt Moore.

We’ve established that Dalton is decent-to-good on most days. Other players on the Cowboys roster are flat-out fabulous. The receiving corps consists of Amari Cooper, CeeDee Lamb, and Michael Gallup. This is arguably the best trio of pass-catchers in the world. Dak Prescott’s elephantine statistics before his leg snapped substantiate this claim.

Zack Martin is one of the NFL’s best guards. The other guard, Connor Williams, is pretty damn good, too. Defensively, the Vikings will face Jaylon Smith, Sean Lee, Demarcus Lawrence, Xavier Woods, Randy Gregory, and Aldon Smith. That’s not a flunky batch of defenders. And, we haven’t even mentioned Ezekiel Elliott, a top-three running back leaguewide.

This isn’t the New York Jets.

If the Vikings can plaster the Packers at Lambeau Field, they can assuredly handle the Cowboys at U.S. Bank Stadium. That is the logic used by most Vikings savants.

Yet, beware. This is the mindset that was used heading into the Falcons game during Week 6. “If Minnesota can come an inch away from winning at Seattle, they’ll spank Atlanta.” It made sense. Atlanta was winless through five weeks, their Super Bowl-appearing coach was chased out of town, their defense was a punchline, and Matt Ryan was washed. Then, the Falcons notched their first win over the Vikings, the interim coach was inspirational, the defense played like a top ten bunch, and Matt Ryan was still a force.

All of these happenings could conceivably replicate this week when the Vikings host the Cowboys. Dallas even has more talent than Atlanta. A win for the Vikings is not a foregone conclusion.

Instead, this contest will serve as a rolling referendum on this quasi-playoff push. If the Vikings win, it’s probably a real thing. A loss would send the team back to an emotional cellar.