3 QB Targets If The Vikings Move On From Cousins 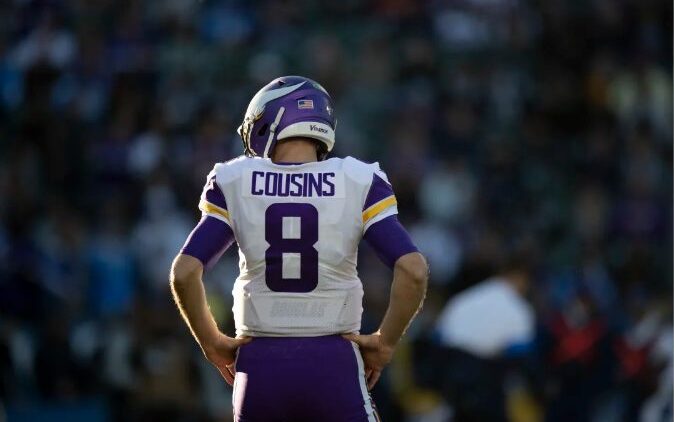 Kirk Cousins is a hero again.

Vikings fans have fluctuated between “love” and “hate” for the majority of Cousins’ tenure in Minnesota, and right now the collective consciousness is firmly positioned on “love”.

In a mere 30 minutes at U.S. Bank Stadium, Kirk Cousins and the Vikings went from sloppy, ineffectual, and without a doubt out of the playoff race, to just one game back from a Wild Card spot.

While mistakes plagued the Vikings all afternoon against the Panthers, Cousins conducted the eventual game-winning crescendo. With 1:51 left in the game, he went 6-7 for 75 yards and the deciding touchdown in just over a minute of game time.

And don’t look now, but after rebounding from a horrendous start of the season, Cousins is quietly playing some of the best football of his career.

First in the NFL in 4th quarter passer rating,

If someone tries to tell you #Vikings quarterback Kirk Cousins hasn't been THAT clutch this year…..

Just remind them that Cousins is first in the NFL in 4th quarter passer rating. pic.twitter.com/VbEryH56Pw

First in the NFL in 4th quarter passing touchdowns,

If they still don't believe #Vikings quarterback Kirk Cousins has been clutch….

Remind them that Cousins is first in the NFL in 4th quarter passing touchdowns. pic.twitter.com/Yv2T0c7stj

And first in the NFL in 4th quarter passing touchdowns when the score is within seven points.

And if they STILL don't believe #Vikings quarterback Kirk Cousins has been clutch….

Remind them that Cousins is first in the NFL in 4th quarter passing touchdowns when the score of the game is within 7 points. pic.twitter.com/uHm0FsYiws

While Cousins is certainly playing outstanding, questions remain about his future with the Vikings. As it stands, there are three conceivable options.

One, the Vikings sit tight and eat his scheduled $45 million cap hit in 2022. As of today’s numbers, that would make him the highest-paid quarterback in the league at 34 years old.

Two, the Vikings extend Cousins again. Kick that $45 million can down the road and tie Cousins to the Vikings financially until, presumably, he is 36 or 37.

If the Vikings decide to trade him after this season, per The Athletic, the team taking on Cousins would be getting him essentially at $28 million a year for two years, a very solid contract for a quarterback playing some of the best football of his career.

So, allow me to explore the hypothetical: the alternate universe in which Vikings GM Rick Spielman decides to offload Cousins one year after his contract extension, selects the hopeful quarterback of the future in this years’ draft, and targets a free agent “bridge” quarterback to keep the team competitive while the rookie quarterback develops.

If you are skeptical this could happen — and rightfully so — just remember that Spielman traded for and then traded away Yannick Ngakoue in just under the span of two months. Maybe it’s more plausible than you think?

Before we proceed, there are three rules:

Projected Contract: $6 to $10 million per year

The 38-year old veteran has proven time and time again that he still has plenty of gas left in the tank.

Prior to being benched for the Dolphins’ hopeful quarterback of the future Tua Tagovailoa in the waning minutes of week six, Fitzpatrick was playing like a bonafide starting quarterback.

Going 3-3 including three wins in the four games before he was replaced, Fitzpatrick threw for 256 yards a game, with 10 TDS, 7 INTs, and a 70% completion percentage.

Fitzpatrick would be a perfect blend of skill:

Mike Gesicki rose high to catch one of Ryan Fitzpatrick's two touchdown passes as the Dolphins beat the Jags on Thursday night.

Report and highlights below 👇

"The greatest teammate I’ve played with. The thing that makes him special is he makes the guys around him better players. If I could play with him for the next 15 years I would. He’s the man."

Find yourself a supportive work colleague like Ryan Fitzpatrick 🥰pic.twitter.com/fdLkYmLoaj

Not to mention, Fitzpatrick just led the Dolphins to a win last week with Tagovailoa out, going 24-39 with 257 yards, 2 touchdowns, and no interceptions.

With a contract of no more than $10 million per year, the Vikings would still come out ahead financially even after the $20 million of dead cap due to the hypothetical Cousins trade.

Projected Contract: $10 to $20 million per year

Cam Newton signed a one-year $1,750,000 “prove it” type contract with the Patriots this past offseason, and the year is not going as Newton would have hoped.

Coming off an injury and being snubbed by a number of quarterback-needy teams, this was the year Newton hoped to bring himself back into “respected starter” territory. Instead, the Patriots have wobbled to a 5-6 record, with Newton looking out of place and uncomfortable at multiple points throughout the season.

Despite the current troubles in New England, the Vikings could be an intriguing fit for a variety of reasons.

For starters, it’s hard to see Newton commanding a large contract after this lackluster year with New England. One would think if he wasn’t getting blockbuster offers this past offseason, he certainly won’t be getting them this offseason.

Bill Belichick says Cam Newton “is in the building more than any player on the team” and “spends a lot of time talking and connecting and building relationships. He has tremendous leadership. It’s very impressive.” pic.twitter.com/TVQvw8WRH3

Third, it’s hard not to salivate at the potential Vikings’ offensive output with Newton at the helm.

Can you imagine the RPO offensive possibilities with a mobile Cam Newton, Dalvin Cook in the backfield, and Adam Theilen and Justin Jefferson as targets?

Newton has lost a step since he was terrorizing the league, but his lack of playmakers in the New England offense isn’t helping him to showcase his talents. A Vikings offense filled with weapons could help Newton rejuvenate his career.

Projected Contract: $10 to $18 million per year

Once upon a time, Brissett was seen as the heir-apparent to Tom Brady in New England.

Upon moving to Indianapolis in 2017, Brissett had the chance to prove himself as a franchise quarterback for the 2019 season after Andrew Luck abruptly retired just before week 1. What followed wasn’t exactly a fruitful season — and quite possibly why the Colts signed Phillip Rivers this offseason — but it wasn’t truly horrendous, either.

As the starter, Brissett led the team to a 7-8 record, amassing just under 3,200 total yards, 22 total touchdowns, and six interceptions.

And now as the backup for Rivers, the Colts have started to incorporate him in the offense in creative, effective ways. Brissett has three touchdowns in the past three weeks, and has impressed in limited action with plays like this:

More scoring #TENvsIND… how lucky are we?

Jacoby Brissett with the greatest QB sneak of all-time. pic.twitter.com/VBMzZRfDI4

Once again, Brissett does have limited action this year, but PFF currently ranks him 14th among all quarterbacks.

The only problem: it’s unclear what the Colts intend to do with their quarterback situation. Starter Phillip Rivers and Brissett are both free agents after this year, and only time will tell if the team re-signs Rivers, Brissett, or decides to go in a new direction.