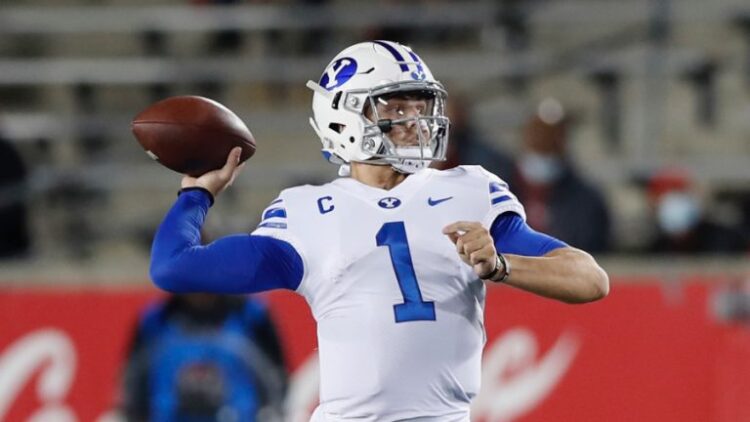 The Vikings’ loss to the Dallas Cowboys on Sunday all but killed Minnesota’s bleak playoff chances. It’s time to look at the future. Using The Draft Network’s Mock Draft Simulator, here is a 2021 three-round mock draft for the Vikings.

Minnesota probably needs to trade down to obtain more draft capital. However, the board fell in favor of the VIkings here. Kirk Cousins will most likely be Minnesota’s starting quarterback because of his contract. That doesn’t mean the organization can’t think about the future.

Zach Wilson, the quarterback prospect who has made a name for himself the most this season, falls into Minnesota’s hands. Most teams have to trade up to get their next franchise guy. Wilson is probably a quarterback who would benefit from sitting and learning for at least half a season.

Wilson does great things on the move, whether it be bootlegs or scrambles to extend plays. His athleticism will also benefit the offensive line’s play. He’d also enter an offense with Dalvin Cook, Adam Thielen and Justin Jefferson; a group that helps a young quarterback incredibly.

The defense will continue to need an overhaul. Minnesota has a business decision to make considering Anthony Harris this offseason. Harris comes off the franchise tag and will turn 30 years old next October. Is it likely he comes back on a multi-year deal? Doubt it.

Who comes in to replace him? Syracuse’s Andre Cisco. Simply put, he is a ballhawk. Cisco intercepted 13 passes across three years and 24 games. He’s constantly around the ball. There are deficiencies in his game, tackling struggles and “dirty eyes” that follow with a lot of ballhawk players are there. Cisco is still a piece that can become a fun piece in Minnesota’s future defense.

I like me some play making safeties! Andre Cisco pic.twitter.com/5g4giyNTDY

Through 11 weeks this season, Minnesota’s sack leader is Yannick Ngakoue. He played six games for the Vikings. Danielle Hunter can’t be counted on to play another snap for the Vikings. There needs to be new blood to rush the pass rusher.

Weaver isn’t the pass rusher that blows you away from an athletic standpoint. Nevertheless, he wins in many different ways as a pass rusher. Despite missing the 2019 season due to an ACL injury, Weaver has nearly matched his 6.5 sacks and 14 tackles for loss from 2018 this season. In eight games in 2020, he has 5.5 sacks and 12 TFLs.

Rashad Weaver is a tormentor of quarterbacks.
An owner of an extensive pass-rush arsenal.
Quite instinctual and savvy when it comes to run D.