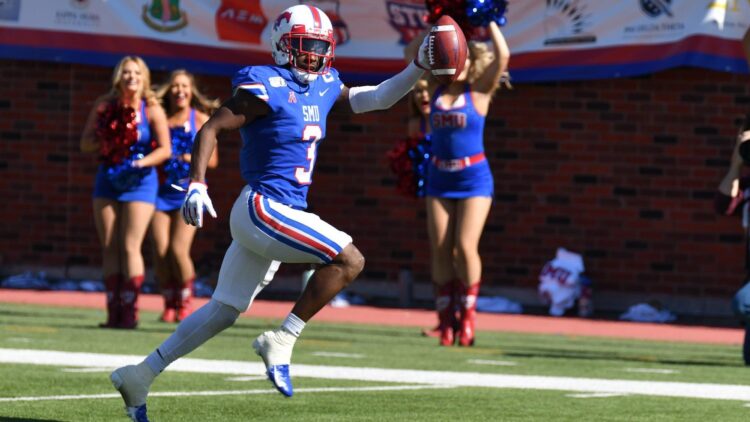 The Minnesota Vikings receiver room is looking a little sparse on talent. With the trade of Stefon Diggs, they’ve lost one of the best in the NFL. They still have Adam Thielen who is a top 15 receiver in the league, and they just brought in Tajae Sharpe from the Tennessee Titans. That said, Sharpe isn’t Stefon Diggs, but he does bring some solid veteran depth, assuming he makes it out of training camp.

After that though, the pickings get really slim. Olabisi Johnson played a significant amount of time last season with Thielen being injured for much of the year, but nothing he does is elite by any means. Dillon Mitchell was stuck on the practice squad last year, and I’m higher on him than most, but he seems very similar to Johnson. Solid, but with little in the way of elite skills. The same can be said for Alexander Hollins, Davion Davis, and Chad Beebe.

With all that said, it looks like the Vikings could be setting up to go receiver in the first round with one of their two top 25 picks. However, I don’t think they need to, I’m working on a piece dedicated to just that argument, part of that argument is the fact that guys like James Proche from Southern Methodist University will be available very late in the draft.

If it was just a question of production, and if he was in another year’s draft that wasn’t so stacked at receiver, Proche would likely be a day two pick. In five seasons with the Mustangs, one of them as a redshirt in 2015, Proche racked up 3949 receiving yards, 39 receiving touchdowns, all on 301 catches. That’s a 13.1 yard per catch average, and a touchdown every 7.7 catches. He also returned 50 punts for 382 yards, a 7.6 yard per return average, and 31 kicks for 615 yards, a 19.8 average.

Proche participated at the 2020 NFL draft and measured in at 5’11” and 201 pounds. He was also measured with an arm length of 29 ¾”, which is very low, and a hand size of 9 ⅝”. He did not run the 40 yard dash, 60 yard shuttle, or record a broad jump. He was a top performer in the bench press where he put up 20 reps, which was fourth best for receivers.

When you watch Proche’s tape, you see his unreal ability to track the ball calmly and snatch the ball out of the air with elite hands. He lacks length, even for the college level, but makes up for it with his ability to time his jumps and pull the ball away from defenders. Working out of the slot, he has the room to find openings and give quarterbacks a chance.

His highlight tape is almost all circus catches over and around defenders. It’s strange to see such a great contested catcher in a small form factor like Proche. Usually, it’s the long guys who can beat defenders with their reach and height in 50/50 situations, but Proche seems to do it with his extremely strong hands and a knack for making defenders mistime their turns.

Proche will need to improve his route running at the next level. He lacks a suddenness in his cuts, and tends to gear down into them which telegraphs to defenders that he’s about to change directions. He also rounds off his routes, making it tough for him to create space. He makes up for this with his contested catch ability, but it’s a lot less dangerous to throw to an open guy then a guy who’s covered, but you know can go get the ball.

Proche is also on the smaller side and that, combined with his lack of quick feet to throw off press coverage, means that he’ll be relegated to slot duties at the next level. I was very happy to see him as a top performer in the bench press, because it confirms the strength I saw in his tape, and his competitive toughness helps negate some of his size issues, at least when he has the ball. However, if he’s working in the slot, he’ll likely have less chance to show off his contested catch ability and will need to polish his routes to create better separation.

If the Vikings want to get Proche, they’ll need to spend a sixth or seventh round pick on him, or hope they can sign him after he goes undrafted. I think he’s a diamond in the rough in this draft. He’s got maybe the best hands in the class, and he’d be crazy valuable at even the sixth round. His experience as a returner also gives him an instant role on the team. He’s not a burner, but much like Marcus Sherels, I don’t think he’d have any issues with muffs or fumbles.

Of course, this is all assuming the Vikings are looking to grab receivers this late in the draft. If they do go receiver in the first, plus say Tyler Johnson in the third or fourth, they might be looking to spend these picks on offensive lineman or depth defensive backs. Although, I think that may be the wrong move as I’ll explain in a piece on PurplePTSD.com tomorrow morning.