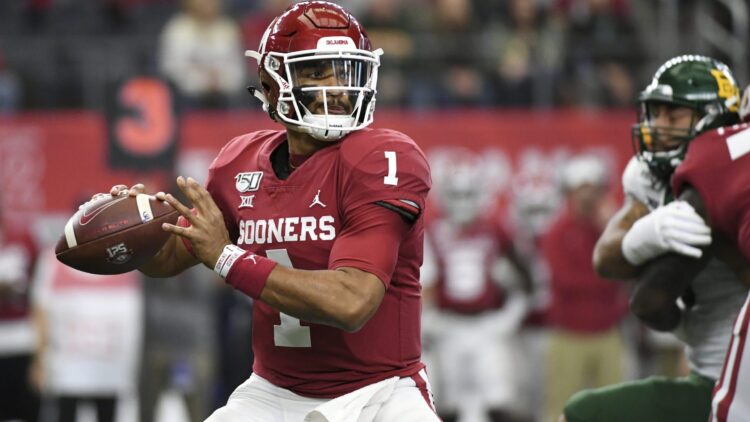 Oklahoma quarterback Jalen Hurts looks to pass against Baylor during the first half of an NCAA college football game for the Big 12 Conference championship, Saturday, Dec. 7, 2019, in Arlington, Texas. (AP Photo/Jeffrey McWhorter)

The Minnesota Vikings sit at a crossroads with their quarterback situation. Two years ago, they brought in the best QB to hit free agency in recent history by giving Kirk Cousins $84 Million in guaranteed money. The idea was that Cousins was the last piece of the championship puzzle for a squad that had reached the NFC Championship game the year prior.

Flash forward to today, and the Vikings have yet to even reach the same level of success with Cousins at the helm, and they are currently in what some like to call “salary cap hell,” being up against the cap with many players left to re-sign and give extensions. Our own Deshawn Vaughan laid out a plan, similar to how the Chiefs acquired Patrick Mahomes to replace Alex Smith, but I’m going to agree with not giving away too much to move up to get a first rounder, and instead trying to snipe a second or third round guy with some things that could make him the next big NFL star.

The subject for this profile then is Oklahoma Sooner, and former Alabama, quarterback Jalen Hurts. Hurts had an interesting rise to relevance in college football. Starting out at Alabama, Hurts led the Tide to a national title berth in his Freshman season, while picking up SEC Offensive Player of the Year honors. His sophomore season he once again played well enough to bring Alabama to the national title game, but was benched after the first half for Tua Tagovailoa who would lead the team to a comeback victory.

In his Junior season, Hurts rode the bench until an injury sidelined Tua. Hurts led the team to an SEC Championship, but Tua returned for the National Championship and the Crimson Tide once again benched Hurts. After that benching, Hurts decided to transfer to Oklahoma as a graduate, so he could play immediately.

This year at Oklahoma, Hurts led his team to a 12-2 record, and a College Football Playoff berth. Unfortunately, his team ran into the monster that was Joe Burrow and the LSU tigers. Along with passing for 3851 yards and 32 touchdowns to eight interceptions, Hurts also accumulated 1298 rushing yards and 20 rushing touchdowns this season. Hurts also finished second in the Heisman voting to Joe Burrow, and collected first-team All-Big 12 honors along with being named third-team AP All-American.

Over four collegiate seasons, Hurts collected a total of 9477 passing yards and 3274 rushing yards. He also added 80 touchdowns to 20 interceptions, and 43 rushing touchdowns.

What Hurts does really well is move with the football. His ability to create with his legs is obvious from the numbers, but is even more impressive on the tape. Given a lane, he can take a few yard loss and make it a 20 yard gain. He has the second gear as a runner to make big plays once he hits the second level. That athleticism also gives him the option to string plays out and look for breakdowns in coverage.

Where he will need to improve is once he steps up, or out,  he needs to keep his eyes downfield and look for his third and fourth options. At the next level, he won’t be able to tuck immediately and expect to pick up chunks of yardage every time. Using his legs sparingly, he could be similar to Russell Wilson.

What will keep Hurts from being Wilson is his arm talent. He certainly doesn’t have the arm some of the top end talent in this draft, and it’s why he will be falling to the second or third round. He lacks the ability to make throws down the field. When he does go for big shots, he tends to float the ball and it’s all up to his receiver to bail him out. If he can ride the bench for a year and let the training staff build up his arm, he could improve his deep ball.

The final knock on Hurts is a downside to his creativity and escapability. He never gives up on a play, and because of that he tends to force throws, especially in the red zone. He will also need to remember to slide at the next level because although he’s not the smallest guy, 6’2” and 218 lbs, durability is always a question with mobile quarterbacks in the NFL.

If the Vikings really want to move on from Cousins, which is unclear at this point, Hurts is an intriguing player. However, I just don’t think he’s the type of guy that Zimmer, Kubiak, or Spielman are looking for. What I will say is that he reminds slightly of Teddy Bridgewater in his lack of a deep ball and ability to make plays with his feet. So, perhaps Spielman will look at him as a second chance to get that franchise quarterback in the draft. The Vikings would need to spend either a second or early third to get Hurts. It’s unlikely that he slides to the late third, barring injury. So, perhaps they will be able to slide back and still get him.