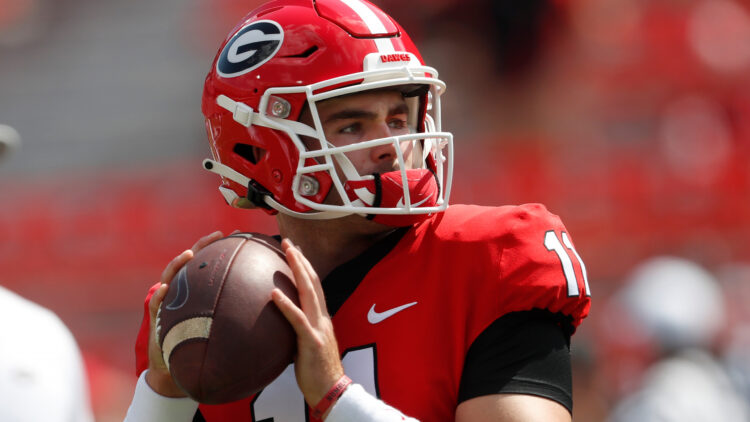 Last week I wrote about the Vikings potentially targeting Oklahoma Sooners Quarterback Jalen Hurts. What I loved about Hurts is his potential for growth and the fact that he could fall as far as the third or fourth round. Hurts is also not the type of player that the Vikings are looking for at quarterback. He is nothing like Kirk Cousins, and he wouldn’t be ready to run an NFL offense from a mental standpoint. However, if the Vikings wanted to go for a guy who already has it all between the ears, they could target Jake Fromm out of the University of Georgia.

While at Georgia, Fromm played in all 43 games in his three seasons and led the Bulldogs to a 36-7 record. In his freshman season, the Bulldogs went 13-2 and made the CFP National Championship game against Alabama. The Bulldogs lost in overtime 23-26, and from went 16/32 for 232 passing yards and one touchdown to two interceptions. Fromm passed for 2615 yards, 24 touchdowns, seven interceptions and completed 62.2 completion percentage as a freshman. He also won SEC Freshman of the year as voted on by SEC coaches and was a freshman All-American according to ESPN and USA Today.

Fromm’s sophomore season was his best statistically, but the Bulldogs finished 11-3 with losses to Alabama in the SEC championship and Texas in the Sugar Bowl. Over his sophomore season, Fromm threw for 2761 yards, 30 touchdowns, six interceptions, and a 67.4 completion percentage. He was a finalist for the Davey O’Brien National Quarterback award.

This season, Fromm’s junior year, the Bulldogs had a record of 12-2 and won the Sugar Bowl against Baylor. Georgia again made the SEC Championship game, but were beaten by the eventual national champions LSU. Fromm’s completion percentage and touchdowns went down, but his yardage total went up and he still only threw five interceptions. His final statline was 2860 passing yards, 24 touchdowns, five interceptions, and a 60.8 completion percentage.

You would like to see a guy play his best football right before he declares for the draft, but Fromm has shown enough consistency over his three seasons at Georgia that it won’t affect his stock much if at all.

Fromm’s best attributes are between the ears. He knows how to read a defense and can work through his progressions unlike many other college quarterbacks. It’s rare to see a guy so polished on the mental side of the game, and that makes Fromm a very safe option to hold a clipboard for a season or step in and manage a game right off the bat. Teams can really get excited with the stability he would bring at the quarterback position.

On short throws, Fromm is one of the best at putting the ball where it needs to be. Within 10-15 yards from the line of scrimmage, and especially in the middle of the field, Fromm places the ball perfectly and it means he doesn’t turn it over in those situations. On the flip side, his deep ball leaves something to be desired, and he tends to float throws outside the number and that gives defenders chances to make plays on the ball.

I’d like to see Fromm use his legs more, in many ways. First, I’d like to see him use his hips to drive the ball more. He is very up and down when he throws and flips his wrist well, but he could get more on his throws if he engaged his legs and hips more. He doesn’t get his front leg bent much, if at all.

Second, I’d like to see him quicken his feet on drop backs. He is very smooth while dropping back, but could stand to speed up to get himself ready to throw. If he’s pressured quickly, which is more likely to happen at the next level, he’ll have issues making quick throws. Another small thing to go with that, he has a habit of spinning the ball that isn’t a problem unless that quick rush happens. It shouldn’t be too big of a deal, but it could make it easier to fumble with that extra movement.

To go along with the footwork, he needs to be able to sense pressure better and move in/out of the pocket more. If you take away his options, or get to him quickly, he’ll often be content with taking sacks by running into rushers or his linemen. He needs to find lanes and escape much better. He doesn’t have to become a running threat, and likely won’t as he is pretty slow, but he needs to know how to get out of danger better and at least get the ball out of bounds.

If the Vikings wanted to get Fromm, they would need to either spend their pick in the first on him, or move up into the early second to get him. He’s the kind of player that Rick Spielman and the current staff want. He’s extremely smart, knows how to run an offense and read a defense. However, the Vikings already have Kirk Cousins who does all that and has a better arm. If the Vikings were in the position they were in 2018, where it looked like all they needed was a quarterback to run the offense, Fromm would have been perfect, but they already spent the money to get Cousins.

Cousins is about the ceiling for Fromm too. He’s not a high upside pick who has elite physical talents. He’s a very solid player who can manage a game and might be able to make some exciting plays down the line. The Vikings taking Fromm in this draft really doesn’t make sense unless he somehow falls to the fourth or fifth round, which is very unlikely given how many teams are still looking for their guy.