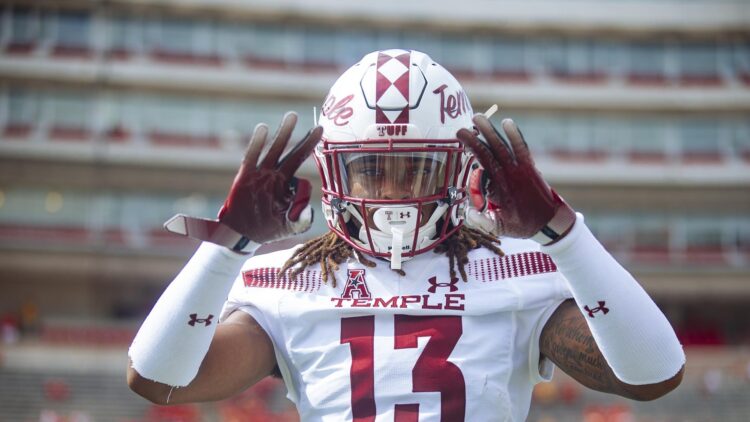 It seems like every year around this time, I fall in love with one player or another for the Minnesota Vikings to target in the upcoming NFL Draft. In 2013, it was Cordarrelle Patterson. The Vikings made, in my view at the time, the right choice to get him with the 29th pick. Freak athleticism, size and above all a shiftiness that made him an excellent kick returner.

2014: Johnny Manziel, and the Vikings dodged a bullet there.

2018: Lamar Jackson, yes even with Cousins

Although Jackson would have been a good pick, and the jury is still out on Mixon and Hurd, I feel that in general my draft crushes have not panned out. So this year, I decided to get excited about a guy who is low risk, because the Vikings could get him with one of their very late round picks. At that point they’re all just guesses anyway, right?

So I present my 2020 NFL Draft crush, Isaiah Wright from the University of Temple. Wright was a four year player for the Owls, and played wide receiver, half back, and kick/punt returner. Over his four seasons, he collected 1552 receiving yards, 134 receptions, 12 receiving touchdowns, 552 rushing yards, 3 rushing touchdowns, and he threw five passes, completing two for a total of negative five yards.

When you watch Wright’s tape, you see the versatility and explosiveness on display. He’s shifty with the ball, and he knows when to make his moves in the open field to set up lanes in both the return game and on offense. The return game is really where he shines, something that could help the Vikings fill the hole left if Marcus Sherels retires.

He really can line up anywhere on the field, and that makes him valuable as both a true option to get the ball and as a decoy. Since the Vikings love using the running back as a receiving option, Wright could slot in very nicely behind Dalvin Cook and Alexander Mattison and potentially take the place of Ameer Abdullah.

Wright also knows how to use leverage against defensive backs very well. What I mean by this is that he knows when and where to push and pull defensive backs with his athleticism. If he needs an inside release, he knows to attack the outside shoulder before making his cut.  So he knows how to separate, despite not running an advanced route tree. He also put on one of the best double moves I’ve ever seen in Shrine Bowl practices.

Unfortunately, you also see the biggest drawback of Wright’s game, which is undoubtedly his hands. He creates enough space to give his quarterback a chance, but he seems to either fight his hands and over think, or go to make his run after catch before securing the catch. This is frustrating at the college level, but it’s down right career-ending at the NFL level.

If the Vikings want Wright, they will need to spend either a sixth or seventh round pick or hope to snag him if he goes undrafted. He’s raw for sure, but he reminds me a ton of Cordarelle Patterson, just without the first round grade. A dangerous gadget player with issues that need to be worked through. The risk at that point in the draft is worth it in my opinion, especially if the Vikings want to try to get Diggs’ replacement dirt cheap.IT