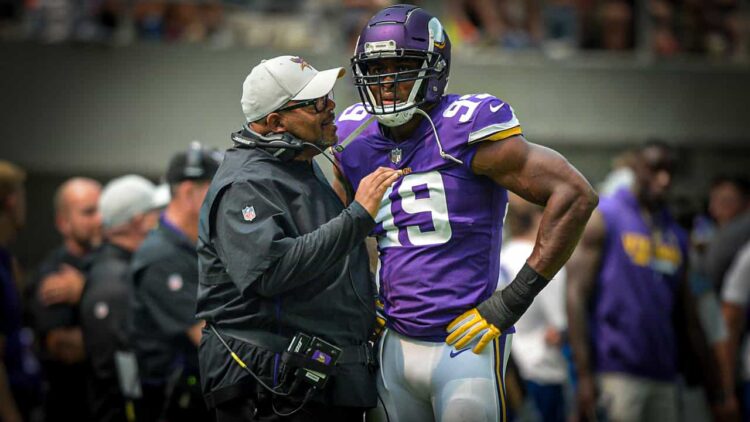 Minnesota Vikings fans should be feeling hopeful. True, the 2020 season has been a disappointment. We were expected to compete, but instead we’re heading toward yet another underwhelming finish. Nevertheless, we should have hope in our Minnesota Vikings.

If you have a few minutes, go read Dustin Baker’s most recent article on Purple PTSD. Baker outlines the tremendous roster turnover on defense and then the issues with injuries. The end result, Baker notes, has been a thoroughly underwhelming defensive performance. However, there is good reason to believe the Vikings’ defense can bounce back.

The defensive line will receive a much-needed talent infusion with the return of Danielle Hunter and Michael Pierce. Baker envisions D.J. Wonnum as the other defensive end, but I actually think Jalyn Holmes has a good chance to be the starter. He does a nice job in run defense, and he has the size to slide into 3T on passing downs, thereby freeing Wonnum to come in as a pass rush specialist. Otherwise, the linebackers and secondary will improve. The young rookies — Jeff Gladney and Cameron Dantzler — are looking really promising. The return of Anthony Barr and Eric Kendricks will also revive the linebackers. In the end, it wouldn’t be at all surprising to see this defense jump back up to elite status in 2021.

Recently, I was looking around Over the Cap’s Vikings section. Perhaps the most striking component of Minnesota’s financial situation is that they currently have just under $35 million in dead money this season. It’s a staggering amount. Stefon Diggs accounts for the biggest number, and Yannick Ngakoue isn’t too far behind. Why bring this up? Well, it does speak to the aforementioned issues on defense since so many of the former players are still chewing up cap space. Moreover, it illuminates what needs to happen for Minnesota during the offseason.

Next season, it’s crucial for Rick Spielman to get the financial end of things under control. They currently only have around half a million in dead cap money for 2021. This number is going to rise, but they need to do their utmost to ensure it doesn’t get out of control. One option is to explore the trade market so they can guard their cap space. The Vikings just aren’t in a position to take on massive dead money, so Spielman and his team will need to be shrewd. In the NHL, GMs regularly shed salary by trading bad contracts to teams with cap space, usually because they’re attaching a promising prospect or draft pick. It’s a technique that isn’t as common in the NFL, but it’s one that Spielman ought to consider.

Mike Zimmer’s Back and Forth Success

Admittedly, I’m still skeptical about the narrative surrounding Mike Zimmer having one good year and then one bad year. At this point, it’s worth returning to.

Zimmer’s Vikings will once again follow a playoff season with a disappointing non-playoff season. How much blame can he receive for this? He certainly deserves a lot of blame. After all, Zimmer is the man in charge. That being said, Zim deserves credit for getting his players to continue fighting and growing after a 1-5 start. The work Zim has put in getting the Minnesota Vikings to actually compete following the bye ought to give fans hope.

The Minnesota Vikings are committed to their Leadership Trinity for the next few years. Things are discouraging now, but don’t lose hope. The Vikings are well-positioned to have a strong 2021.