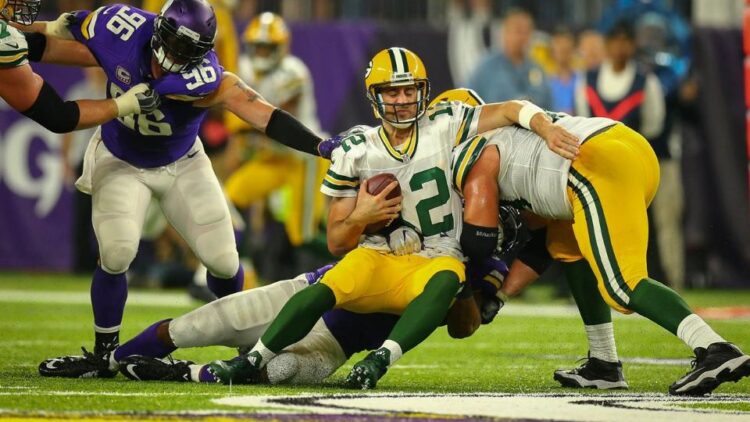 Image courtesy of Vikings.com
Sunday will mark the 116th regular season match-up between the Minnesota Vikings and Green Bay Packers in what, as we saw last season, could very well be the game that determines whether or not the Vikings make the post-season a year after missing the playoffs and disappointing Vikings fans everywhere.
We’ve covered the Vikings/Packers match-up from top to bottom on the purpleTERRITORY Media Network and that means that all that is left is the actual score predictions from our team of writers!
So, let’s get right into it!
Joe Johnson (@vtPTSD)
Owner/Senior Writer/Editor-in-Chief/Hyperbolic Title Creator
I wrote in length about how good (or bad) I believe the 2019 Packers are and a lot of that is tied to the decline in production from none other than Aaron “Lonely Christmas” Rodgers. You can click here to read more about that, but the basic crux is that Rodgers (and thus the Packers) really haven’t been the same these past couple seasons and even with Rodgers playing at his highest level, this Packers team has a ton of question marks on it’s roster. Beyond that, with new head coach and Gary Kubiak acolyte Matt LaFleur calling the shots, this is also the first complete offensive overhaul of Rodgers’ long career.
It’s that new offense and the lack of any pre-season play that makes the Packers especially vulnerable week two at home. While I personally don’t think they’re going to be a very good team this season anyway (they’ve got a rough strength of schedule, just like the Vikings, but have a lot to figure out on the fly on both sides of the ball), playing them at home a week after what can only be described as a borderline disastrous start to the season (outside of the fact that Chicago played equally “bleh” on offense), is a gift from the NFL gods/schedule makers.
Beyond that, though, division games are always hard to predict. The Vikings haven’t hit or topped 30 points in the past TEN (11 actually) games against the Packers, despite Kirk Cousins arguably having his best games against the Packers last season. I do think that the Vikings, with the establishment of a run game (as we saw in Week 1 against the Falcons) WILL top 30 points and I think that the defense will mostly keep the Packers new/faltering offense in check (until late in the game where they’ll most likely pick up some garbage time points).
Vikings 31- Packers 17
Jordan Hawthorn
Senior Writer VikingsTerritory.com/Host Load the Box Podcast
Note: The following came from Jordan’s weekly ‘Gambler’s Guide’ Series

Green Bay gets 3 points at home. I’m not that surprised as they are the home team and both teams have stout defenses. Like I said above, I think this game will be won by a last-second field goal. I think the Vikings will find themselves down one or two with under a minute on the clock and Cousins and company will throw themselves into field goal range. Then Dan Bailey will get his shot to build on what has been a more consistent game ever since the team created a competition between him and now free agent kicker (at least as of the writing of this article) Kaare Vedvik.

I feel comfortable taking Minnesota, especially when they get +3. Look for a Vikings “upset” this week, 27-26.