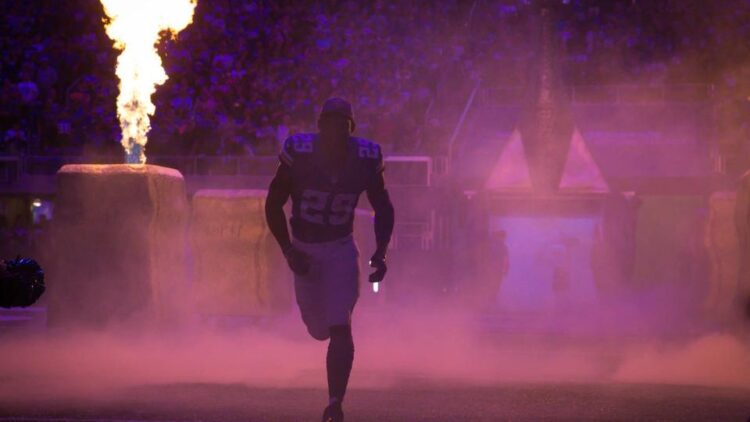 Every win matters in the NFL regardless of context, but obviously some wins are more important than others and it’s safe to say that Sunday’s win against a very beatable Giants team (that was without its star running back in Saquon Barkley) was one of the most important week/game 5 wins in (at least) the recent history of this team. After falling to the Bears thanks to a completely disjointed offense lead by $84 million dollar man quarterback Kirk Cousins the Vikings, or at least the media that covers the team, alternating between it’s two super talented, and angry, wide receivers.

The drama that followed the team to New York, though was the ‘will he/won’t he play’ drama which, I guess, was a step up from the ‘will they/won’t they trade him’ drama that engulfed the team earlier in the week (as I said, it was a LONG week). Diggs ended up playing, and while he was limited to four catches for 44 yards (for a healthy 14.7 average). His intensity or frustration was palpable, though, as he broke two tackles late in the game for a big gain.

One of the main stories of this game, and there were many, was the fast start for Kirk Cousins who was 19-of-23 for 278 yards and a touchdown in the first half and who ended the game with a healthy 306 yards, two touchdowns and an overall rating of 138.6. While Diggs ended up as the squeakier wheel this week, Adam Thielen was the first to show his displeasure with the way things were going in the passing game. In his post-game presser after the disastrous Bears loss, depending on who you ask Thielen either threw Cousins under the bus or was speaking more generally about the passing game. Unlike Diggs later in the week, Thielen did attempt to dial those comments back, going so far as to appear on Cousins’ mid-week podcast.

That must’ve helped at least rekindle the chemistry between him and Cousins as Thielen ended the day with 130 yards. He also had the second two-touchdown game of his career, which as the announcers noted during the game, should lead to lots of “Hey Kirk, can I come on your podcast?” jokes from other Vikings this week (probably not Diggs, though).

In a season filled with career days in only five weeks, Cook had perhaps his best game as a pro by compiling 218 total yards on 132 yards rushing (on 21 carries) and 86 yards receiving on six catches. Wow. The above totals helped the Vikings more than double the yardage from the Giants, 490 to 211. That yardage was decently balanced with 211 (net) rushing yards and 279 passing yards, which also helped the Vikings win the time of possession battle 32:45 to 27:15.

The Vikings defense welcomed rookie Daniel Jones to the NFL in his third start, with a good mix of blitzes that lead to four sacks on the day. The lack of pressure against Bears back up Chase Daniels was a big talker this past week around Vikings media (and most likely in Eagan at Vikings HQ), so it was nice to see Zimmer and company throw lots of smoke at what should be an overmatched opponent.
Speaking of career days, Anthony Barr was everywhere on Sunday, recording a safety in the second quarter as well as an amazing interception late in the game (just as the announcers on Fox were talking up what a Swiss Army Knife he was in the Vikings defense).

Jones finished his day 21-of-38 for 182 yards and a touchdown and an interception for a paltry rating of 65.9.

The Vikings needed a big win to at least start getting the taste from last week’s game out of their mouth and while it remains to be seen how Diggs feels about things, you’d think that this game would at least be viewed as one step in the right direction. The Vikings will face a tough but beatable Eagles team at home next week, followed by another division game against the tough Lions. Speaking of the Bears, they also were upset by the Raiders in London, dropping them to 3-2. Should the Packers fall to the 3-1 Cowboys and the Lions on the Bye, the Vikings could find themselves still in last place (thanks to the tie-breakers and their 0-2 division record) but in a much better spot than they seemed a week ago.