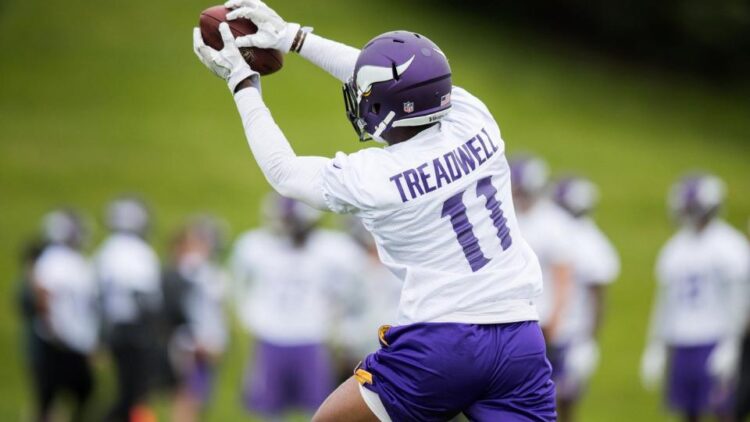 The Minnesota Vikings had plenty of weapons on their offense this year. The main issue with the offense was the offensive line. Cousins hardly ever got time to throw the ball, while the run game struggled to ever get going against competent teams. As the season progressed however, the Vikings learned of a new problem emerging within their offense: The Vikings’ have a serious depth problem at wide receiver. Adam Thielen and Stefon Diggs are both amazing wide receivers and they each had a spectacular year. However, as teams realized that the Vikings only had two weapons on the outside, they began to dare the Vikings to beat them with someone else. The Vikings attempted to utilize Laquon Treadwell and Aldrick Robinson, but Treadwell had issues with drops and Robinson is strictly a deep threat. So, what do the Vikings need in a WR3? The team needs someone who can play on the outside so Thielen can work his magic in the slot. They need someone who can stretch the field. They need someone who won’t let his ego get in the way of the team’s success. Let’s breakdown some potential options for the new WR3.

The Vikings could stick with Treadwell or Robinson as their WR3. The team could also explore using Chad Beebe or Brandon Zylstra in their WR3 spot. Treadwell and Robinson combined for 53 catches, over 500 yards, and 6 touchdowns. Treadwell was a first round pick and has the ideal body type for an outside receiver. Standing at 6’2”, Treadwell should be able to go up and get the ball for some big plays. There are multiple issues that come along with Treadwell however. He hasn’t shown the ability to make big plays and HE CAN’T CATCH A BALL TO SAVE HIS LIFE. Robinson is almost the exact opposite of Treadwell. He is a short player standing at 5’10”. Robinson was a 6th round pick, and he has shown the ability to make big plays down the field. The issue with him is, he is a one-trick pony. Robinson is almost exclusively a deep-threat. The other two players I mentioned haven’t had much playing time, but Beebe is more of a slot guy, and I would prefer we keep Thielen in the slot.

The Vikings could pursue Golden Tate in the free agent market. Tate has been a thorn in the Vikings’ sides for years, and could be a solid, but expensive WR3. Tate can play outside and in the slot, and he does most of his damage after the catch. If Tate was to get 1-on-1 coverage consistently, could he make a catch and a big run afterwards? I believe so. Another free agent the Vikings could pursue is Randall Cobb. Cobb has played all of his career in Green Bay, and the Vikings could add the 29-year-old pass catcher in this offseason. Cobb has over 5,000 career yards and over 400 catches. A name that hasn’t been tossed around much is Kevin White. White is a lot like Treadwell, but is 6’3” and instead of dropping passes, he gets hurt. White would be a cheap signing, and could be a low risk, high reward type of player.

The Vikings only other option is to select a receiver in the 2019 NFL Draft. Minnesota MUST use their first selection on an offensive lineman, but what about the later rounds? The Vikings best receivers now are an undrafted player and a 4th rounder, so they have had success in the late rounds. The Vikings need a big bodied, deep-threat player that can be found at a value. Why not draft Lil’ Jordan Humphrey? He’s 6’5”, runs great before and after contact, breaks tackles, and he knows how to highpoint the ball. I think he could step into a room and learn from Adam Thielen and Stefon Diggs right away and become this team’s new star. Another potential draft steal could be Hollywood Brown. The Vikings may need to trade up in the second for him, but the speedy deep threat is like Aldrick Robinson, but faster. He could be a real burner for this team and could break games open with his speed.

Overall, the Vikings will need to add someone to their roster, even if it is just for a competition with Treadwell to motivate him. The team needs more help than just one wide receiver, but adding another weapon for Kirk Cousins couldn’t be a bad thing. Feel free to check out our Patreon to get exclusive content and perks! https://www.patreon.com/purplePTSD. Follow me on Twitter at jhawthorn16 for hot takes and Vikings insights.