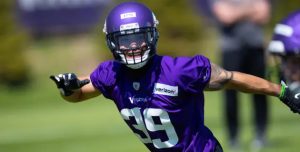 The Minnesota Vikings are currently a bit light on solid options at the safety position. Harrison Smith and Anthony Harris make up the starting duo, but after those two it becomes a bit foggy as to what the plan is. The only other two players on the depth chart with NFL experience are big-bodied Jayron Kearse and former Alliance of American Football player Derron Smith. There are also three rookies competing for spots; undrafted free agent Micah Abernathy, rookie camp standout Isaiah Wharton, and sixth round pick Marcus Epps.

Epps is the focus of today’s training camp profile. A former walk-on at the University of Wyoming, Epps has been defying expectations his whole career. He is considered to be undersized for his position at 6’0” and 191 lbs, but that didn’t stop him from having a stellar career for Wyoming. Epps collected 324 total tackles, nine interceptions, and 22 passes defended in his collegiate career. Despite being a walk-on and redshirted in his first season with the team, Epps worked his tail off to earn a starting spot in his first year of eligibility after the redshirted season.

The team has already invested more in Epps than his competition. By drafting Epps in the sixth round and not waiting to see if he fell out of the draft, the Vikings showed that they were invested in him. It’s not much of an advantage, but the tag of draft pick gives him a slight edge over Wharton and Abernathy. Epps can also play both safety and cornerback, and could backup Mackensie Alexander at the Nickel.

Epps also was reportedly seeing first team reps in OTAs. Of course this could just be due to a lack of other options at the safety position, or wanting to limit the risk of injury to the likes of Anthony Harris, but I think it shows that they wanted to see how Epps handles the pressure of a Zimmer defense. The safety position is key in Zimmer’s system, and with Epps at least getting his toes wet with the first team, it shows that the team has some faith in this guy going forward in what is amounting to the biggest season in terms of hype/expecation(s) since 2009 as the Vikings have what is the most stacked roster (on paper) they’ve had perhaps ever (which is a good time to also mention that we’ll be doing a lot more Fantasy related stuff this season, so check out our sister-site purplePTSD.com for that and other great things like this offer from Fanduel!

Finally, Epps is competing with a very thin field at a position that has a high probability of injury. With only Harrison Smith and Anthony Harris as proven/quality starters, Kearse has played in certain defensive sets but not often as a true safety and there was a reason Derron Smith was in the AAF, it opens up the position for rookies like Epps. As I said before, since he has the advantage of being a draft pick and getting to work with the other starters already, it will be hard for him to be beat out by a couple of undrafted free agents (even if he has even a decent camp compared to them).

If Isaiah Wharton goes on the warpath and Jayron Kearse turns a corner in true safety play. It’s likely that the Vikings only carry four safeties into the season, which means that there is not a ton of room for error from guys like Epps, especially if another player is balling out. The players that I consider to be the biggest threat to Epps’ spot are Jayron Kearse and Isaiah Wharton.

Although I think it is unlikely that Kearse gets cut from the team if he shows he can play as a true safety he might be able to take away time from Epps. We know that Kearse’s physical traits are off the charts, and if he can couple those with some better coverage skills he could be the next great Minnesota Vikings defensive back. If this is the case, he could overshadow the smaller Epps for three safety sets and rotations.

Coupling Jayron Kearse’s newly found skills with a strong showing from Isaiah Wharton could get Epps sent to the practice squad. Wharton has already impressed enough to make the team out of rookie camp but would need to show even more in training camp to beat out Epps. I think Wharton could do it though, as that underdog label could fuel him to some preseason greatness. Wharton isn’t the only one who could push Epps to the practice squad, but I think he is the most likely.

It’s going to be a great battle between Epps, Wharton, Abernathy, and Derron Smith for the final safety spot, but I’m going to give the edge to Epps for now. Being a draft pick, seeing some first teamwork in OTAs, and already having to fight for his football life at Wyoming gives him the advantage in this dogfight.

However, this is a pick that I’m not fully comfortable making as the scales could really be tipped on a few practice reps or preseason plays. This safety battle may be one of the most exciting of camp, even if it is a bit overshadowed by others.

Stay tuned to purplePTSD.com/VikingsTerritory.com for all your Vikings news this training camp and season! By breaking down all the different players this pre-season, you should have a better idea as to who to root for this season (and also, perhaps, who to utilize in daily fantasy).