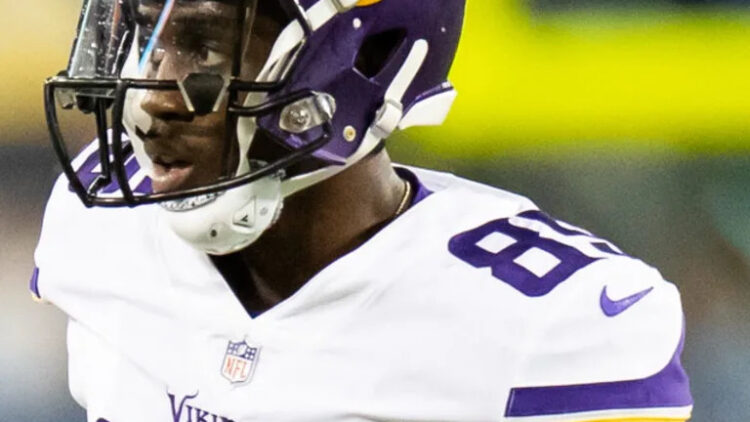 Our team has already talked at length about the wide receiver battle behind Adam Thielen and Stefon Diggs, but I’m going to give a quick summary of the situation to set up this profile. The Vikings have nine players fighting for four roster spots (or five depending if they decide they want seven receivers on the roster) with Jordan Taylor, Chad Beebe, Laquon Treadwell, Brandon Zylstra, and Dillon Mitchell all being talked about as having the best shot for one reason or another.

This leaves Olabisi Johnson, Davion Davis, Alexander Hollins, and  Jeff Badet all on the outside looking in. These aren’t my final takes, they just are the feeling that I’ve gotten from our team here at purpleTERRITORY Media, as well as Vikings Twitter. Today I’ll talk about the fastest man in the whole receiver room, Jeff Badet.

Badet is the fastest player on the Vikings roster. His 4.27 40-yard-dash at Oklahoma’s pro day in 2018 beats out Trae Waynes’ 4.31 40 from the NFL combine in 2015. Badet used his speed to his advantage at both Oklahoma and Kentucky and ended his collegiate career with 1,785 receiving yards, 10 touchdowns, and 657 kick return yards on 30 attempts.

These numbers don’t jump off the page, but Badet’s tape is exciting with him just breezing past defenders and showing that he can make huge gains in the open field. Badet had limited action in last years preseason, only catching five passes for 34 yards, but he did convert a two point attempt in Denver on a contested slant route. Badet was also the only wide receiver to spend the entire 2018 season on the practice squad.

Speed kills and Jeff Badet has it in spades.

He may not have won the ‘40 Yards of Gold’ event, but his speed has been on display for the Vikings in OTAs. The Vikings moved on from Aldrick Robinson this offseason. Robinson was a touchdown machine last season scoring five touchdowns on just 17 receptions, that’s a touchdown every 3.4 catches. Badet could be this year’s Robinson, but even faster. The Vikings also spent $75,000 to keep Badet from going to the Jets, which suggests they felt he was worth at least some investment.

The tape shows that Badet can also make some catches with defenders lurking, and he has the ability to return kicks. He is probably the most intriguing receiver on the Vikings roster for his athletic ability. Certainly, he is a different type of receiver than anybody else on the team, nobody else is a straight speedster. Having maintained his spot on the practice squad for all 17 weeks last season, Badet made himself part of the organization even if he wasn’t on the active roster. Familiarity with the organization, his athleticism, and being faster than the rest of the bunch could serve Badet well although it may not help his status in terms of fantasy football (which is a new focus for us this upcoming season, to learn more check out this promo from Unibet).

Being a one-trick-pony, lack of roster spots, and injury.

Badet is on the small side, only 5’11” and 182 lbs, so it’s hard to see him as a consistent deep threat. He also lacks the shiftiness and route running to be a great catch and run threat. The best use of Badet might be as a gadget option on jet sweeps and screens. However, if the only time that Badet sees the field is on those plays, it will be pretty obvious what the Vikings are trying to do.

Limited roster spots make Badet’s road tough. Of the four spots after Diggs and Theilen, it appears that Jordan Taylor and Chad Beebe are essential locks for spots. That leaves a lot of decisions to be made between the seven remaining receivers. Laquon Treadwell can’t rely on his first-round pick status to make the roster this year, but he has the most experience of the remaining players. Brandon Zylstra did enough work on special teams to maintain a roster spot for most of last season. Olabisi Johnson and Dillon Mitchell each had draft picks invested in them, however as seventh-round picks it’s really their potential that will keep them around. Alexander Hollins and Davion Davis are each significantly younger than Badet. Badet does have a leg up in one way or another on a lot of these players, but he’s not a clear cut favorite, especially against Mitchell, Zylstra, or Treadwell.

Badet has dealt with injuries for a significant portion of his career. He missed his entire 2014 collegiate season because of injury and missed a good portion of OTAs this spring. He will need to maintain his health through camp and the preseason to get his chance to make the roster. Any missed reps in a battle this crowded will push the team to cut him.

Badet is a really tough player to decide on. On one hand, he brings something that every wide receiver room needs, speed, but he also has a history of injuries and isn’t a prototypical deep threat. He’s also in an incredibly crowded receiver room. Badet making the roster might come down to whether the Vikings want to move on from Laquon Treadwell or not.

Jordan Taylor, along with Irv Smith Jr and Kyle Rudolph, could become Kirk Cousins’ big-bodied targets in the red zone. This would push Treadwell out of a job as that’s what he was supposed to be the last few seasons. So, that would open up a spot for Badet, Mitchell, or Johnson. (I’m assuming that both Zylstra and Beebe make the team in this situation.) I think both Mitchell and Johnson can be safely stashed on the practice squad, unless they have very strong preseasons, so that means Badet finds his way onto the roster as the Vikings sixth receiver.

Stay tuned to VikingsTerritory.com/purplePTSD.com/purpleTERRITORYradio.com this season for all your training camp/regular season news as well as our new Fantasy Football/Gaming/Betting section(s).