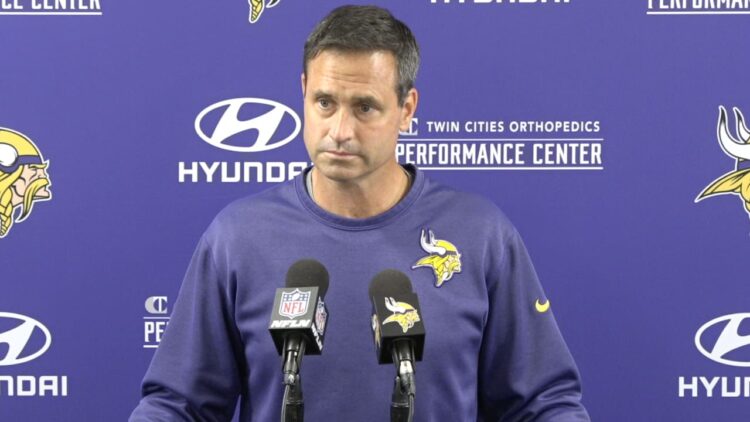 It appears as though the Mike Priefer era will continue in Minnesota.

According to Alex Marvez of SiriusXM NFL Radio, the Vikings are reportedly working to re-sign the special teams coach to an extension. Just like the contract of interim offensive coordinator Kevin Stefanski, Priefer’s deal is set to expire on Tuesday.

Source tells me @Vikings are working to re-sign special teams coach Mike Priefer, whose contract is expiring. Team is exploring other options in case it doesn't happen.

The 52 year-old has had quite the tumultuous tenure as the Vikings special teams coach. Priefer was hired by the Vikings in 2011 under head coach Leslie Frazier. Since then, he was suspended for three games in 2014 after former punter Chris Kluwe reported his use of controversial slurs. He was then responsible for filling in for Mike Zimmer as the team’s head coach in Week 13 of 2016 when Zimmer had to undergo an emergency eye operation.

While the former Navy quarterback and wide receiver stresses stability and consistency in his coaching, kickers under his tutelage have been anything but dependable during his time with the Vikings. Here’s how the team’s kickers have performed under Priefer since 2011, per Pro Football Reference:

Even though kickers have struggled throughout the Priefer era, the rest of the special teams units have not. Take a look at the team’s special teams rankings since 2013 per Pro Football Focus. Keep in mind Nick Olson’s tweet was from early December. The Vikings special teams ranked third by season’s end.

Overall, the Vikings have had the third-highest-graded special teams units, behind only the Chiefs and the Patriots.

Mike Priefer is an excellent coach.

Team officials clearly think highly enough of Priefer to work with him on a new deal. Wednesday’s report noted that the Vikings will explore other options in case an extension is not reached. But as of now, it certainly looks as though Priefer will return as the team’s special teams coordinator in 2019.