18 Players Who Could Replace Anthony Barr 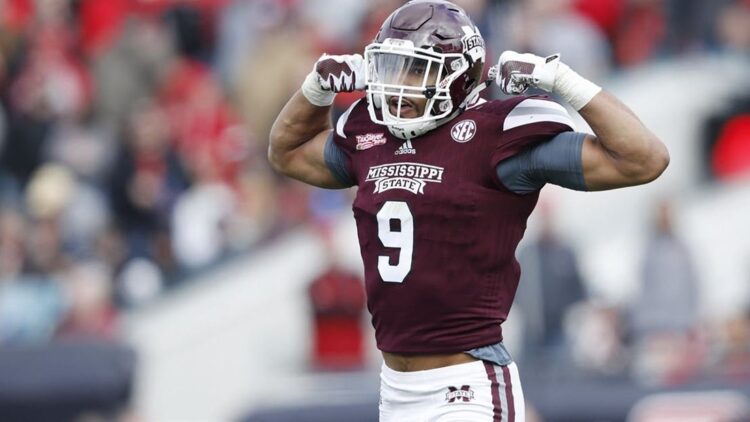 With word coming from ESPN’s Adam Schefter that the Vikings tried to trade Anthony Barr before the draft last year, it’s looking even more certain that the two sides will part ways. As of now, no talks of contract extension negotiations have been reported.

The Vikings still have two days to apply the franchise tag to the linebacker, which means there’s still a chance Minnesota tries to tag-and-trade Barr, but chances are the team will let him walk and recoup a substantial compensatory draft pick next season.

Adam Schefter on KFAN said he would be really surprised if Anthony Barr is back in Minnesota. Said Barr likely wants to go back home (out west to California).

On March 11th, Barr will be allowed to negotiate with other NFL teams. By the looks of it, he’s certainly going to be in high demand. Though the slim possibility remains that he could make his way back to the Vikings, the team appears to be ready to replace him. So, who will fill the team captain’s shoes?

After navigating through the unrestricted free agency market, the 2019 NFL draft prospect pool as well as in-house options, I found 20 players who could potentially succeed Barr as the Sam linebacker in Mike Zimmer’s defense. They are as follows:

This year’s draft class at linebacker is considered a “weaker” group, meaning there’s not much top-level talent. While that certainly makes replacing Barr a little more difficult, there are a few options that could be available to the Vikings in the first couple rounds of April’s Draft:

Allen is one of the best players in the draft. The SEC Defensive Player of the Year is a projected top-10 pick that could be selected in the top five. With his blend of size, speed, athleticism, instincts and versatility, teams needing an edge rusher or a Sam linebacker should run to the podium to draft the 21 year-old. He’ll likely be gone before the Vikings #18 selection, but a trade up to grab the talented prospect shouldn’t be out of the question, especially if he begins to slide. The only issue is, like Barr, would his natural pass-rushing skills be wasted by playing a position that involves more coverage than pass-rushing?

White won the 2018 Butkus Award as the nation’s top linebacker. He amassed 256 tackles (25.5 for loss), 7.5 sacks and 9 passes defended his last two seasons as a Tiger. White was the highest-graded linebacker in the SEC last season, per Pro Football Focus. He moves well laterally and is a stud in coverage, which is a large part of what the Sam linebacker does in a Zimmer defense. If you didn’t know already, Barr has had nearly 4 times as many snaps in coverage than pass-rushing snaps during his tenure in Minnesota. White may not be the tall linebacker than Zimmer prefers, but he’s arguably the best possible option to replace Barr. The 21 year-old exuded leadership at his Combine press conference, which the Vikings defense could desperately use with the potential losses of Barr and Everson Griffen. White is a projected top-20 pick.

Devin White SHOWED OUT for LSU this season and was an Elite coverage linebacker. He will be a force in the NFL. pic.twitter.com/hT69HGGEjc

Bush may be undersized but he’s incredibly fast. He can cover the field sideline-to-sideline and is an effective blitzer. He can get pushed around a bit in the run game, which could limit his chances of becoming a Viking (the team’s defensive philosophy is to make opposing offenses one-dimensional by stopping the run), but the 20 year-old All-American is electric. Bush was one of the top LB’s in the country in terms of pass rush productivity and coverage grade according to Pro Football Focus. He’s projected to go in the first or second round and is easily capable of being three-down starter in the NFL.

Wilson’s athletic ability allows him to play any linebacker position. The 21 year-old is a projected second-day selection (2nd round). The former safety has a knack for being solid in coverage as evidenced by his 6 interceptions in 33 career games at Alabama. However, as you can see from the PFF chart below, Wilson is a project at this point. He just doesn’t rank well in any aspect. That certainly doesn’t mean he’s not a good fit for the Vikings, but the coaches will have their work cut out for them should they need him to start from day one. He’s a moldable, intriguing prospect.

Can Mack Wilson continue to grow in his skills and gain success at the NFL level? pic.twitter.com/qtQ36LhL3G

Sweat fits the mold that Zimmer likes to see in a Sam linebacker. He’s tall, which makes seeing throwing lanes tougher for opposing quarterbacks, plus he’s athletic. Sweat ran a 4.42 in the 40-yard dash today at the NFL Combine. As a Bulldog, Sweat started 26 games his last two seasons, compiling 101 tackles (30 for loss) with 22.5 sacks. Again, the only issue with taking Sweat is the lack of pass rushing opportunities at the position. Perhaps Zimmer can mix things up a bit scheme-wise to get the most out of the 22 year-old prospect.

Montez Sweat has impressed so for at the @seniorbowl and its no wonder as he had an extremely productive season. pic.twitter.com/UOUEpGXQuq

The Vikings may choose to pick up a veteran linebacker in free agency and develop a rookie as his replacement. Here are some prospects that could use some coaching as well as some time in the weight room in order to be molded into three-down options:

It’s unlikely Minnesota will bring in any big-name free agents unless they’re somehow able to clear a substantial amount of cap room. And if that’s the case, they’ll likely bring back Barr. But here’s a couple of options that could interest the Vikings who could come at a much lower cap hit. You may notice one thing, they’re all coming off injuries:

FYI I originally had Preston Smith and Za’Darius Smith listed here but they are true edge rushers who rarely drop back into coverage. Seeing as they both predominately rush the quarterback and will each get hefty contracts from their current or future teams, I left them off this list.

The following players may be salary cap casualties who are cut from their current teams. As you can see they’re a little on the older side, but with the team essentially in a two-year window before major roster turnover may occur, these players could present an immediate, short-term replacement option. However, they won’t come cheap.

Eric Wilson (6-1, 230): Wilson is the logical choice considering he was the one who filled in for Barr when the linebacker was forced to miss three games with injury in 2018. Wilson started a total of four games last season. The team went 2-2 in those games. The 24 year-old compiled 26 tackles (4 for loss), 3 QB hits and 2 sacks. He had a 64.4 Pro Football Focus grade, excelling in run defense (72.8) and rushing the passer (74.4) while struggling in pass coverage (54.3), allowing 20 catches for 133 yards (6.7 YPC). While he certainly has the potential to be his replacement, Wilson does not have the same abilities as Barr. The defense won’t be able to do what it can with Barr in terms of game-planning and disguising looks. In fact, opposing offenses would likely target Wilson often. All-in-all, he’s a decent option to fill in at linebacker, but one that would likely come with his share of headaches along the way.

Hercules Mata’afa (6-2, 250): Mata’afa sat out the entire 2018 season after suffering a torn ACL last June. Now, he’s medically cleared and ready to make an impact. Mata’afa, 23, originally spent time at Sam linebacker with the Vikings before being moved to defensive end. So while he has some work to do to get caught up to speed, he has experience at both positions. However, the fact that he may not be able to run with quicker running backs and tight ends could greatly hinder his chances of becoming an NFL linebacker.

As you can see, there are plenty of options to replace Barr if he leaves in free agency. But finding a replacement that can play even remotely near his caliber, in my opinion, is going to prove very difficult.

4-3 outside linebackers may be easy to find, but finding outstanding ones are rare. Barr has proven at times he can be just that. While it’s my opinion (still) that the Vikings should to do whatever it takes to re-sign him, the writing is on the wall that a separation of the two sides is imminent.

Signing a cheap option in free agency is possible and maybe even likely, but I think the Vikings will ultimately replace Barr via the draft. The options are young, raw, and cheap. Plus, many of the prospects have the swagger Zimmer is looking for. Perhaps he and his son Adam can mold a prospect into a special player just like they did with Barr.