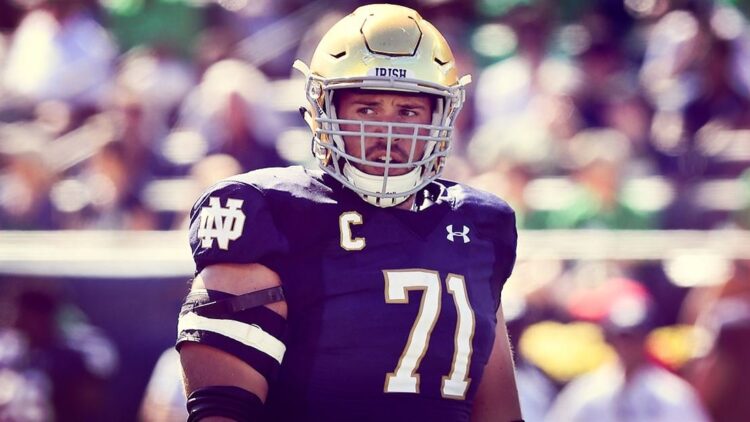 Sometimes you pick a player because they measure out so well. D.K. Metcalf from Mississippi is one of those guys. He had an insane combine, showed his speed, strength and technique. He also showed off his incredible physical shape with his muscles-on-muscles frame. However, there are also times when you take players based on their intelligence and their intangibles. The guys who are really scrappy players who become great leaders and spend their whole career with a team despite not showing much in the way of measurements. Well, that’s going to have to be the thought if a team wants to take Alex Bars, an offensive guard, from Notre Dame.

Bars had a solid couple of years for the fighting Irish. In his 2016 campaign, he started all 12 games at right tackle for an Irish team that would finish 4-8, and rush for 163.3 yards per game. His 2017 season was even more successful when he was slid inside to play right guard. Bars surrendered just 1 sack, 1 qb hit, and 9 pressures in 830 offensive snaps. He also would help Notre Dame set the school’s single-season team rushing record with 3,503 yards. Bars was set to captain an even better Irish team in 2018. However, his season was cut short due to an MCL/ACL injury after just five games at left guard.

Bars has the size and power to play guard in the NFL. He comes in at 6’6” and 312 lbs. His build is similar to Packers tackle Bryan Bulaga. This size gives him a chance to hold his own against some of the most powerful players on the field, both in the run game and when he needs to drop the anchor in pass protection. He also has played on both sides of the center and right tackle. This familiarity with different positions gives him a leg up on guys who are strictly one side or the other. His biggest pluses however are his intangibles. Bars comes from a football family, two of his brothers and his father played college football, and he has the desire to make it at the next level despite a bad knee injury. He also was a great leader at Notre Dame, being a captain his senior season. Losing him was reported as devastating to the locker room. It’s clear that Bars is a great teammate and is hungry to play the game.

Now, Bars size comes with some drawbacks. He tend to play with heavy feet and as a result gets beat by more athletic players. This also means he has troubles with screens and long pulls as it takes him time to get out to his spot. His balance could use some work too. He is a hard hitter and can drive, but his bend needs to come more from the knees then the waist. As it is, he will overreach and can be beat with quick sidesteps and swims. His footwork will need to come around to make him less of a liability and get more quickness against stunting linebackers. Finally, and most importantly, it’s unknown if he can even play again. His last season was cut short by a bad knee injury, and he did not participate in the NFL Scouting Combine and, as far as I can find, has not participated in a pro day or private workout.

If the Vikings want him they may have to spend one of their two seventh rounders. He comes with a lot of baggage. His heavy feet make him an unlikely fit for Minnesota’s new zone blocking scheme, he wouldn’t do well on screens for Dalvin Cook, and finally you don’t even know if he can play again after injury. However, he is a great teammate, football player, and leader. He has size and his intangibles make him a great possibility for a long term team guy. He won’t turn heads right away, but give him a few years and maybe shed some lbs of fat into muscle, and he could be a solid depth piece. If he drops out of the draft entirely, he could be a good undrafted guy to stash on the practice squad.

Likelihood the Vikings are targeting him: Unikely