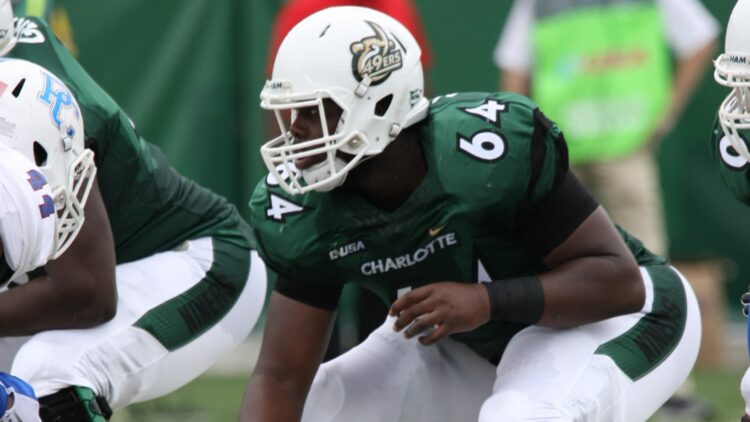 If the Vikings are serious about fixing their offensive line, which they should be, it wouldn’t be surprising for them to take offensive linemen in 2 of the first 3 rounds. Of course we have been speculating heavy on this, but I’ll give my thoughts on the matter quickly. If one of the top offensive line talents is available at 18 (Cody Ford, Jawaan Taylor, Jonah Williams, Andre Dillard) they should snatch one of them up. Then in the second they can go whatever way they want; defensive tackle, tight end, linebacker, whatever. However, in the third the Vikings should return to drafting linemen by selecting Nate Davis from the University of North Carolina-Charlotte.

Davis played 41 total games in 4 years at UNC-Charlotte, and finishing his career with a trip to the Reese’s Senior Bowl where he impressed coaches and scouts. Davis played his first 3 years, after 1 redshirt year due to academic ineligibility, at right guard earning two honorable mention All-Conference USA honors. Then in his senior season, he was moved to right tackle where he again excelled and earned second team all-conference. Davis also served a 4 game suspension due to undisclosed violations his senior season.

Davis looks like what the Vikings want in an offensive lineman. He plays with good leverage and can move people back in the running game. He also has a hard working attitude and plays with a nasty streak that you see in some of the best guards in the game. The Vikings want to move the ball, and Davis could help with his good leverage, strong hands, and desire to be a mover. Davis also has the athleticism to fit into the Vikings’ new zone blocking scheme. His transition to tackle shows that he can move and block in space, and could be used in a pinch to cover that tackle spot. However, the team really should be looking at him as a guard given his smaller frame and shorter arms.

There are some concerns with Davis, the first being his size. He has the weight, but the arm length isn’t there. That’s why he has to rely so much on leverage, but again it shows that a move to the inside is the right move. He also will need to work on his footwork. Davis has a tendency to get his feet too close together or even cross his feet making it hard to maintain a powerful base when facing pass rush. His footwork will need to improve if he wants to be more than a depth piece on an NFL line, especially in pass protection. The other red flag he has is his suspension for undisclosed NCAA violations his senior year. Although it might be nothing, character concerns can derail a players career very quickly.

If the Vikings wanted Davis, they would need to spend a third round pick. This would be the right move if he’s available in the third, especially if they have not taken another lineman in the first two rounds. It seems like Davis’ stock has locked in, but if another team wants him in the second, the Vikings should not compete for him as he probably should not be a day one starter, and would be a reach outside the third. If Rick Spielman can nab Davis, it might be a huge win, or another Willie Beavers, who knows.

Likelihood the Vikings are targeting him: Known to be

Likelihood the Vikings could land him: Very likely

This is my final draft profile before the NFL draft on Thursday. This has been such a fun series to do, and I hope you, the readers, have enjoyed it as much as I have. We will continue draft and college football coverage on Vikings On The Clock on PurpleTerritoryRadio.com. If you’re in the Twins Cities area, consider joining our Day 2 Draft party at Legends Gold Course in Prior Lake [Sponsored by Gray Duck]. You can find information on that here.

Thank you all, and SKOL!